How the Once Lowly Bowl Became LA’s Signature Dish

You could do bowls for breakfast, lunch and dinner. Here are the best ones to try. 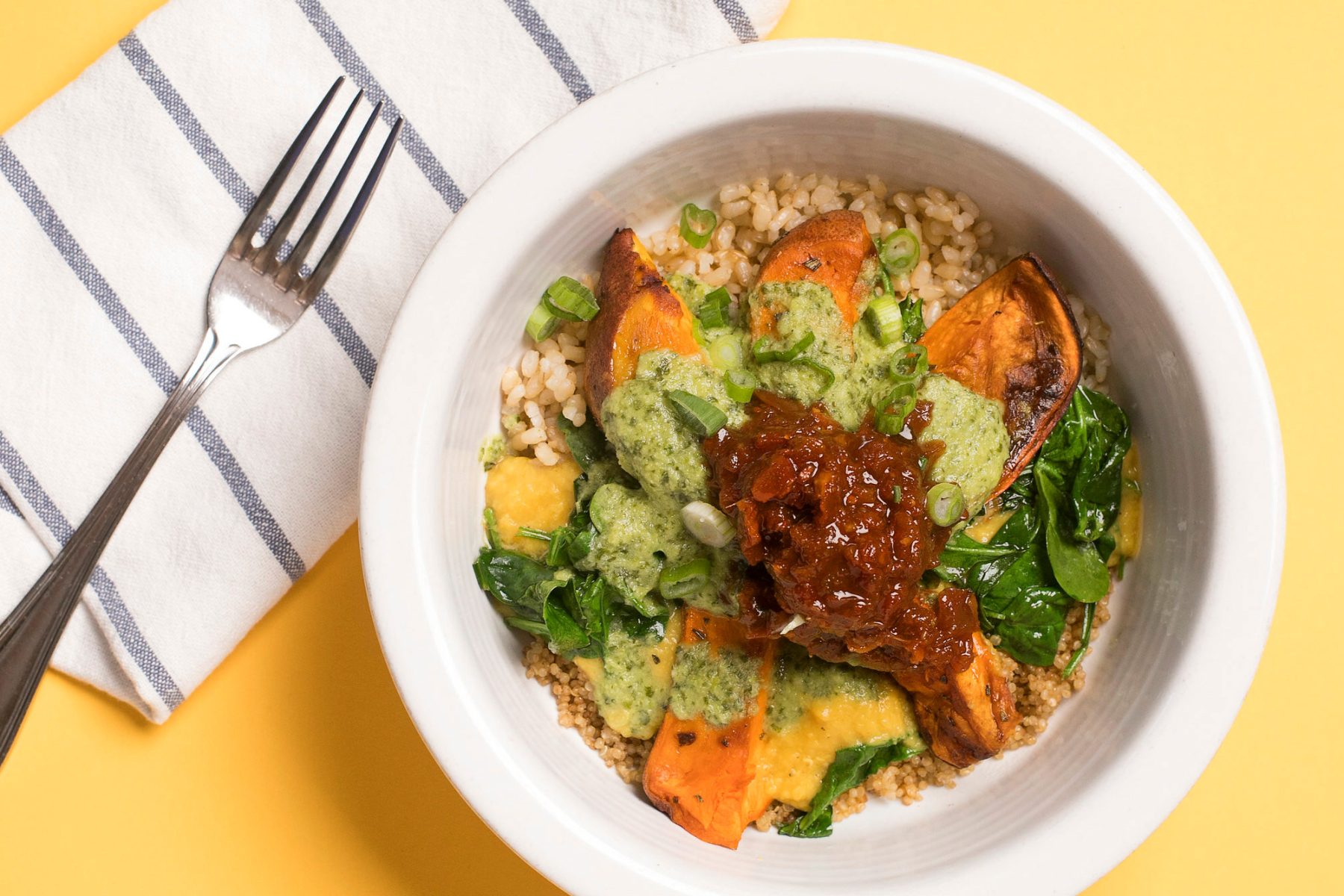 The most famous bowl in Los Angeles reigns supreme at Sqirl.

Add avocado and hold the bacon for an ideal Sorrel Pesto Rice experience — and buy the cookbook if you get too addicted, because eight years out, Jessica Koslow and co. are still going strong. The longevity of the almighty Sqirl bowl hasn’t stopped the Bowl Experience™ — which has been picked apart and worried over for the last four or five years — from spreading like wildfire through menus around L.A.

It’s actually difficult, at this point, to find a menu without at least one bowl option on it. The quick rise of Hawaiian poke bowls in L.A. is surely another factor in the spread of the all-in-one-bite dining trend. Bowls even made their way to breakfast, with sunshine bowls and açai bowls offering a mix between a smoothie and a parfait. According to food historians, the separation of food, flavors and courses was a sign of refinement, and bowl food was too close to how the lower classes ate. Not anymore.

“Eating bowls is a much more organic, integrated way to eat,” said Jasmine Shimoda, the chef and co-founder of Silverlake’s plant-based Jewel cafe. “Which is why it’s amazing that people are going in that direction. Traditionally, it’s been more associated with peasant food — it’s very classist actually. I would say in the 20th century separating food was a sign of your wealth: to have a fish spoon, and an asparagus plate, everything compartmentalized. But that’s a very sterile approach to food.”

Once relegated to the requisite crunchy-hippy health shop in a small-town strip mall, the bowl is now a viable option in daily life, the every-dish that manages to avoid carbs (at least bread ones), incorporate whole grains and spotlight fresh vegetables all at the same time. The increased openness toward vegetarian and vegan lifestyle has helped the bowl along on its journey to significant dish as well.

“The proportion of meat to vegetables is very significant — versus a small salad or maybe soup to start, and then half a chicken with a starch on the side for a ‘square’ meal,” Shimoda explained. “With bowls we’re moving toward a grain base, or sweet potato, with lots of vegetables and pickles. There will definitely be some protein, but it might be lentils or beans.”

Shimoda’s take on a bowl, at Jewel, is close to the macro bowl, a concept hellbent on getting you a carefully calculated percentage of nutrition. Then there are Buddha bowls, which are, uh, mostly for vegans? And last but not least, the delicious, hearty assembly-line bowls served up at Sweetgreen, Cava (think Chipotle, but Mediterranean) and similar spots. All of these offerings provide bowls that are colorful, full of unusual and varied ingredients, and incredibly photogenic for a quick post on social media.

“It’s very nourishing to integrate so many components together,” Shimoda continued. “There’s something very rooted and wholesome about bowls, but another element, in the age of Instagram, is that it’s sensory. It’s nourishing, but also Instagrammable.”

It’s a feature, not a bug, that the bowl functions as a perfect flat lay canvas for Instagram posts, and since older generations seem to love scolding millennials for baby-ing themselves well into adulthood, what could be more infantile than mixing all the ingredients of your meal together into one bite? Irritating baby boomer while getting likes for the ‘gram is a win-win food situation — and it tastes delicious, too.

Here are the best bowls in the city, from pretentious to pretty poke.

Offering a completely gluten-free menu that utilizes Imperfect Produce — aka less aesthetically-pleasing vegetables that would otherwise be thrown away — Honey Hi’s casual mix of crunchy Asian vegetables, juicy chicken, and the sharpness of ginger and miso makes this bowl an unexpectedly excellent and filling option. The jade rice they use as the base is the fluffiest, most pillowy grain I’ve had in a minute, and the spicy almonds on top are *chef’s kiss*. This recipe made its way into The New York Times itself, so you know it’s real.

The Jewel Box at Jewel

Don’t let the shape fool you, the Jewel Box is decidedly a bowl — just with corners. At this plant-based, female-owned east side restaurant, veggies are the backbone of every dish, but that never makes them feel less tempting or delicious. The base of this bowl is beans and sweet potatoes instead of a grain, but the generous portion is just as filling. Add avocado or Tempeh bacon for $3 each.

The Breakfast Bowl at Lincoln Pasadena

Popping up on the Altadena border in 2014, Lincoln quickly made a name for itself on the far east side when Jonathan Gold himself praised their bowl offerings. Again, there’s no grain involved in this bowl, but the white bean base with onion, fennel, greens and a poached egg make this a delightful mess of breakfast flavors you can sop up with a bit of grilled baguette (unless gluten ain’t your thing). The dish comes standard with a hearty portion of sausage, that can also be easily left off to make it vegetarian.

The La Brea at Poke Me

What’s in it: Whatever your heart desires.

While the poke craze in L.A. may be rescinding a bit, just as the cupcakes and fro-yo waves did before, tried and true joints like Poke Me have no problem maintaining a loyal customer base. The quality of ingredients, price, and portions are all reasons I still return to Poke Me, even if it’s a 30-40 minute drive across town.

Anyone with a cursory knowledge of west side cuisine will tell you to head over to Superba without asking any questions — and they’d all be right. Once you’re there though, feel free to skip the famous bread and grab a grain bowl so simple you’ll be struck by the four ingredients. Rice, kale, egg and almonds, all in idyllic proportions. Add protein if you like: chicken for $4.50, avocado, $3.50, or seared tuna $7.50. But the bowl doesn’t need it; the bowl abides.

What’s in it: Acai or Patiya (dragonfruit) base, strawberries, banana, granola and blueberries.

Why did no one tell me that acai is basically ice cream for breakfast? Between these powerful antioxidant friendly morning bowls, and the ever-rising Instagram-friendly smoothie sunshine bowls, the round, deep dish concoctions now occupy a sweet spot on most breakfast menus. Naturewell is one of the best L.A. spots to get acai, and their location in the heart of Silverlake on Sunset Boulevard means the wait time can be a bit long and the lines are sometimes intimidating. But the staff works efficiently and fast, mixing up smoothies and juices for a clientele who usually swing by post-workout or for an early morning fix.

The Organic Hen Egg at Destroyer

What’s in it: Crispy potatoes, mushrooms, quinoa, bed of herbs.

Destroyer is one of the L.A. restaurant’s that’s both unassuming and pretentious, but the inventive, otherworldly quality of the food is more important than either of those factors. One of Jordan Kahn’s usual offerings (though you’ll need to check the daily projected menu when you arrive to be sure) is a grain bowl that allows a poached hen egg, crispy potatoes, roasted mushrooms, and a bed of herbs to effectively eclipse the quinoa at the bottom. You’ll never have another “grain bowl” like this one in your life — and that’s kind of the point.

The Whole/Macrobiotic Bowl at Café Gratitude

If you’re looking for the traditional vegetarian/vegan take on the macro bowl, look no farther than Cafe Gratitude’s “Whole” bowl. Each menu item has a corresponding “uplifting” name that can be somewhat irritating when ordering, but getting past that new age annoyance doesn’t take long once you taste the local, organic produce. The plant-based menu run by Chef Seizan Dreux Ellis since 2012 is emblematic of just what the future of California cuisine looks, smells, and tastes like. Get a bowl at their Arts District location, and then walk it off while checking around the area’s galleries and shops.