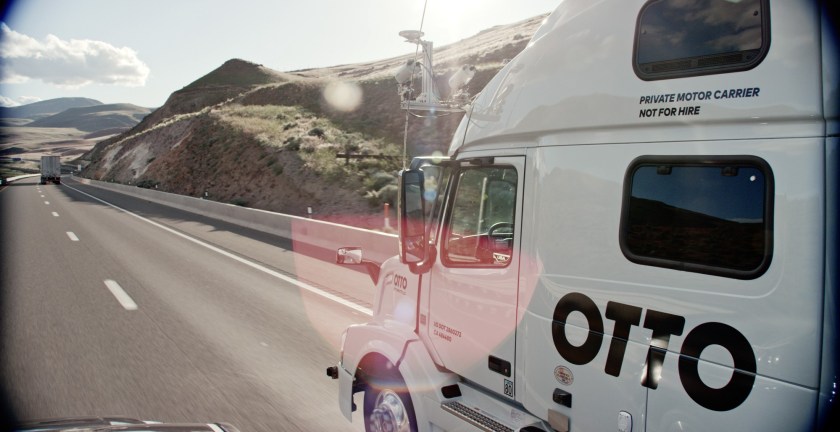 A self-driving truck built by Uber’s subsidiary Otto made a pioneering delivery of beer in Colorado last week. The 18-wheel semi loaded down with Budweiser made the 120-mile trip from Fort Collins through the center of crowded Denver to Colorado Springs using only its panoply of cameras, radar, and sensors to read the road.

The Otto truck carried a professional driver, but he simply monitored the progress from the truck’s sleeper berth behind the driver’s seat. The trip was a fairly straight two-hour drive south on the I-25 highway, “exit-to-exit”, the company said in a statement, suggesting the initial and final stretches off the highway were handled by the driver.

The test came just six weeks after Uber launched its demonstration of a self-driving car service in Pittsburgh, gaining a jump on the many automakers now developing systems for cars and trucks to pilot themselves.

“This shipment is the next step towards our vision for a safe and productive future across our highways,” the company said. “With an Otto-equipped vehicle, truck drivers will have the opportunity to rest during long stretches of highway while the truck continues to drive and make money for them.”

Uber took over Otto in August to combine forces on developing self-driving technology; Otto co-founder Anthony Levandowski became head of the program for both companies.

Otto said the initial test drive was the beginning of a partnership with Anheuser-Busch, the largest US beer brewer. It launched a website, freight.uber.com, for truckers to sign on to work with the company in the future.

“When you see a truck driving down the road with nobody in the front seat, you’ll know that it’s highly unlikely to get into a collision, drive aggressively, or waste a single drop of fuel,” Otto asserts. –AFP/Relaxnews