The Best Cocktails at the World’s Best Bar

Plus, a few more drink recipes for fall

What do you do once you’ve (twice) opened the Best Bar in the World?

You celebrate with a drink. Then share the wisdom.

Which is exactly what you’ll find inside The Dead Rabbit Grocery and Grog Drinks Manual, a cocktail  from the world’s certified best mixologists, available right now.

The emphasis at The Dead Rabbit — a Gangs of New York-style speakeasy located on the southern tip of Manhattan — is on historical drinks. The “forgotten ones, the drinks that have long since fallen out of fashion but can still teach us much about flavor and texture,” according to bartenders/owners Sean Muldoon and Jack McGarry, who co-wrote the book with Ben Schaffer. 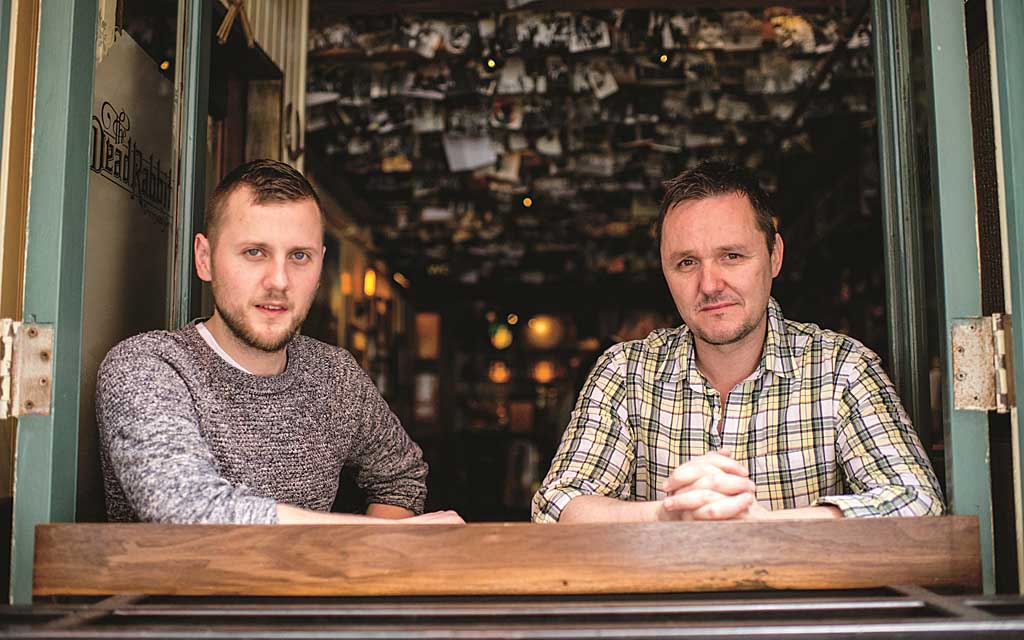 Inside: recipes, of course. All of greatest fizzes, cobblers, and toddies, with their backstories (some dating to the 17th century) and how the Dead Rabbit guys have ‘em up for a new generation.

Plus, the fascinating history of the DR’s founders, two Belfast boys who had already won over the cocktail world at the Merchant Hotel in Northern Ireland before setting off for pastures.

“The Belfast bar was ahead of its time,” Muldoon told us at the book launch party. “There was nowhere else to go … what else were we going to do? Just win another award? But New York — we could do what we did in Belfast, but get so much more opportunity. This book is living proof of that.”

And since we had the brains behind the best bar in the world in front of us, we had to ask: What’s your favorite drink?

For Muldoon, it’s the Mamie Taylor.

“It’s Jack’s variation that makes it good,” he said, nodding at his co-owner. “It’s a Scotch highball with ginger and bitters. Refreshing. Had that drink in other bars, never had it as good as we’ve made it here.”

Could have said that about pretty much anything.

Three excerpted recipes below, including the Mamie Taylor, along with two more perfect for the cooler times ahead.

From the book: Originally, this evocative name was connected to a straightforward Scotch highball. (Ms. Taylor, like many who have given their name to a mixed drink, was showfolk—an opera singer, in fact.) Here, we’ve expanded on the basic highball structure to incorporate the McGarry touches: spice, flavored , plenty of bitters, and underutilized liqueurs. The creative combination of Strega and Scotch is not obvious, but it is a great stage effect nonetheless. Ring down the curtain.

Add all the ingredients, except the soda and garnish, to a shaker. Fill with ice and shake. Add the soda to the shaker and strain the mixture into an ice-filled tall glass. Garnish with freshly grated nutmeg.

Schmidt’s original is heavily boozy, a whiskey and bitters brawler in the best cocktail tradition. As with many of the drinks in this chapter, we’re taming the beast and evening out the flavors. For this recipe, we will ratchet up the bitters component with two complementary formulas, plus our old standby, absinthe. Further seasoning comes via gloriously herbal Bénédictine (perhaps familiar to most imbibers when combined with brandy as B&B) and Royal Combier, which is a spicy liqueur that has in fact already been blended into brandy.

Add all the ingredients, except the garnish, to a mixing glass. Fill with ice and stir until chilled. Strain the mixture into a cocktail glass. Twist the orange peel over the glass to express the oils, then discard the peel.

There are those who wish us to believe the unlikely fact that Irish coffee was invented at Shannon Airport in the 1940s. Obviously, for any of us who have been to any airport, we know that nothing creative has ever occurred in such a place.

A competing tale has it that Jonathan Swift invented the Irish coffee in 1705 through the simple genius of adding whiskey to his coffee and cream. Earlier the same day he had invented the Irish toasted cheese, Irish biscuit, Irish hat stand, and Irish stack of envelopes by inadvertently pouring whiskey onto those household items as well.

Regardless of its original production, the drink did not come into its own until its appearance in San Francisco at the Buena Vista Café, where it became a permanent favorite of locals and tourists alike. We always knew we wanted an Irish coffee on the menu at the Dead Rabbit, as it is perhaps the best-known Irish-American classic, and this recipe was designed under the guidance of Dale “King Cocktail” DeGroff. It’s a deceptively simple approach. One secret: Buy ridiculously expensive heavy cream from your favorite local dairy. Another tip: When preparing this classic, be careful not to slip on the Irish floor.

Add all the ingredients, except the garnish, to an Irish coffee glass. Float an inch of whipped cream on top. Garnish with freshly grated nutmeg.

Combine the sugar and water in a medium saucepan over medium heat, but do not boil. Slowly stir to dissolve the sugar. When the syrup has thickened, remove from the heat. Use a funnel to pour into bottles. The syrup will keep for 2 to 3 weeks in the refrigerator. Yields about 16 ounces.

Excerpts from THE DEAD RABBIT DRINKS MANUAL by Sean Muldoon and Jack McGarry. Copyright © 2015 by The Best Bar in the World, LLC. Photography © 2015 by Brent Herrig . Reprinted by permission of Houghton Mifflin Harcourt Publishing Company. All rights reserved.