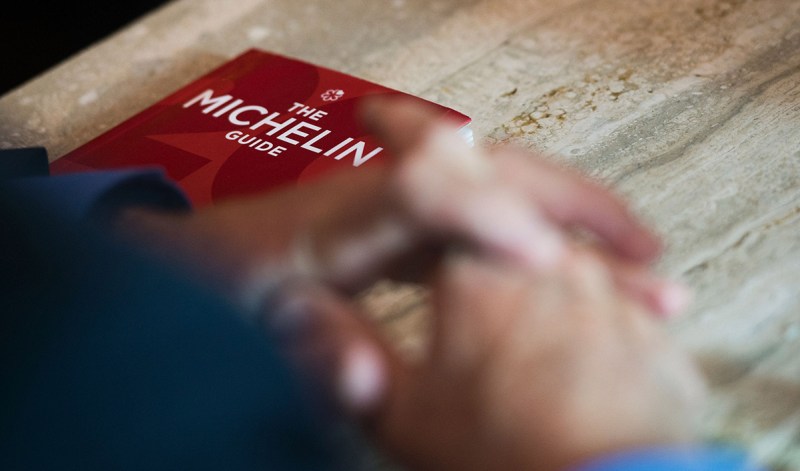 The Michelin Guide unveiled its first edition for the US capital Washington, D.C. on Thursday, awarding coveted stars to a dozen restaurants it said were part of a hot foodie scene.  (Andrew Caballero-Reynolds/AFP/Getty Images)
AFP/Getty Images

The Michelin Guide has unveiled its first edition for Washington, D.C., awarding coveted stars to a dozen restaurants it said were part of a hot foodie scene.

Alas, no restaurant got the full blessing of three stars, although three received two stars and nine got one.

The best known of the three top-honored chefs is probably Spanish-born Jose Andres. He studied under Ferran Adria — a pioneer of innovative, so-called molecular cuisine — before settling in Washington and becoming a prominent figure in the restaurant world. Andres has nearly a dozen establishments in Washington that blend Spanish cuisines with flavors from Latin America and Asia.

His most recognized restaurant is called Minibar and has room for just 12 customers. The tasting menu costs $275 a head, excluding wine, taxes, and tip.

The other two restaurants that received two stars are Pineapple and Pearls and The Inn at Little Washington (which is actually a 90-minute drive outside the city in rural Virginia).

Altogether, 107 restaurants are reviewed in the Michelin Guide for Washington, including 19 in the “Bib Gourmand” category for good food at an affordable price. 33 kinds of cuisine are represented in the book.

“With its own culinary identity centered around ‘Mid-Atlantic cuisine’, over the last few years the culinary scene in Washington has undergone some profound changes that have made its local cuisine among the most dynamic in the world,” Michelin said in a statement.

Of the 21,000 restaurants featured in Michelin guides around the world, only just over 100 have three stars.

Until now the only U.S. cities that had Michelin Guides focusing on their food scene were New York, Chicago, and San Francisco.