KLM is now offering Heineken on draft during their flights. (KLM)
By Adrian Lam

KLM is now offering Heineken on draft during their flights. (KLM)

Dutch airline KLM has launched the world’s first in-flight draft beer in a collaboration with Heineken.

After years of trying to figure out how to serve fresh beer from the tap in a pressurized environment at 35,000 feet, KLM and Heineken have come up with what they’re calling a draft trolley that allows flight attendants to pour a cold brew straight from the tap in front of their thirsty fliers.

The new service made its world premiere this week aboard a flight to Curacao in the airline’s World Business Class cabin.

By bringing the possibility of draft beer aboard an airborne vessel, KLM has raised the bar in the ongoing trend for innovative beer offerings. In recent years, airlines have been diversifying their beer menu with craft beers, microdistilleries, and custom blended brews. 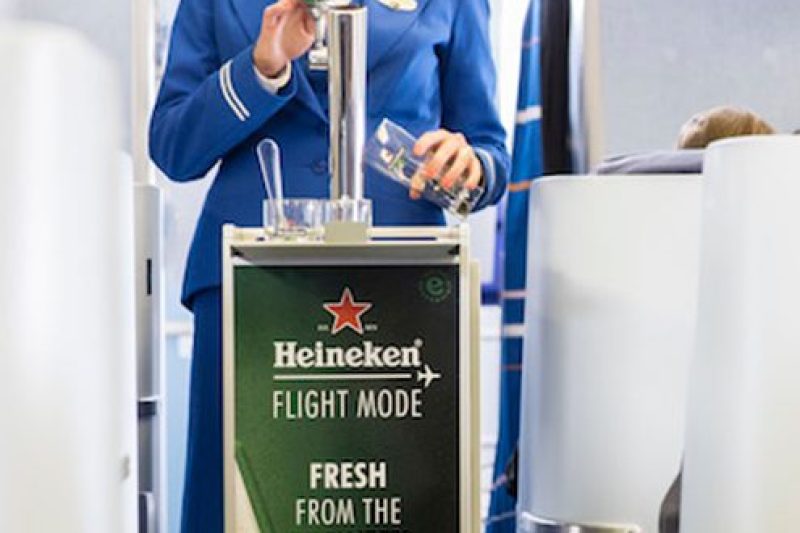 KLM is now offering Heineken on draft during their flights. (KLM)

The KLM draft trolley was created with a 3D printer and works on air pressure instead of traditional CO2, since flight safety regulations forbid the use of carbon dioxide on board an aircraft.

The “BrewLock” technology uses air pressure to bring the keg pressure to the desired level, compensating for the negative pressure on board the aircraft and generating sufficient tap pressure for serving.

The costs and labor associated with building the custom-designed trolley, however, means there’s only one draft trolley for now. The service will be available in World Business Class cabins on select KLM flights.