This Guy Cooked a Steak With a Drone

Not to be reductive, but men like their flashy toys and grilled meats.

So hats off to David Freiheit, a self-proclaimed “YouTuber, extreme runner, cool dad” who, in an Internet first, recently wedded those two worlds by grilling a steak with a drone.

Attempting the unusual feat on Canada Day, Frei — who’s probably best known known on YouTube for documenting a squirrel hijacking his GoPro — used a small personal drone (not identified, but looks to be a DJI Phantom), an iPhone controller and a long hook/wire to place the steak on a grill and cook it from about 20 feet away.

As the video shows, his efforts were complicated by both dicey weather and his decidedly novice drone skills — during the flips, the steak touched the ground twice.

That said, watching the video is worth it just to hear Frei’s hearty, vigorous laugh as he finishes the first steak flip.

It’s the sound of accomplishment. A steak — nay, a job — well done. 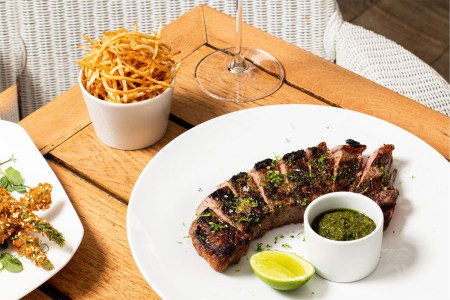 Everything You Need to Know About Amaro, the Iconic After-Dinner Drink
A Real World Test of the Unreal Bentley Continental GT Speed
Chef Sol Han Tells You How to Expertly Navigate a Korean Market
What Science Tells Us About Being a Grower vs. Shower
Where Have All the Big-Screen Comedies Gone?
How to Be Happy, According to the First Deaf-Born Person to Run Every Major Marathon
Musicians Pay Tribute to Television's Tom Verlaine
Products of the Week: Chili Chocolate, Bowers & Wilkins and California Birks
The 18 Best Valentine’s Day Gifts for Him