So, maybe your guilty habit of watching Moonshiners has got you daydreaming. Or maybe you’ve got the ropes of home brewing down so pat you’re ready for a new challenge. You think, well, shoot, what’s up with home distilling? Can’t be that much harder than making beer, right? Just let some potato-juice rot, cook it up and then, boom, hooch.

For one, are you prepared to face Johnny Law, become a dyed-in-the-wool moonshiner and endure all the Backwoods Outlaw-ness that the epithet implies? Because, despite its growing popularity, home distilling is illegal. But not prohibitively so, per se. Much like home brewing proved a gateway for future microbrewers into their craft, a lot of the main proponents of the growing artisanal distilling movement cut their teeth on small-batch home distilling, however illicit.

These are complicated waters to tread (and ferment), which is why we reached out to Colin Spoelman of the award-winning Kings County Distillery in Brooklyn to give us the lowdown on the demands and pleasures of making your own bottle of brown.

Say someone is interested in trying their hand at home distilling. What’s important to understand before they get started?
The first and most important thing to understand is that it’s illegal.

Assuming you’re okay with breaking the law, you can move on to the next bit. You’ll need a still, which is generally an expensive piece of equipment, though it can be built inexpensively. A good sized (eight-gallon) hobby still will run you $300 or more. The still is essentially a heat source to boil the fermented liquid to steam (alcohol has a lower boiling point than water) and a cold water loop to create cold surface area inside the still for the steam to condense and collect.

Beyond that, you’ll also need everything that you would need for home brewing beer or wine, so stockpots, carboys, big plastic tubs — nothing unusual, but the big sizes can be hard to track down.  All the grain, yeast and other ingredients can usually be found in a home-brew shop or grocery store.

What spirits are the easiest to produce at home?
For distilling, I recommend starting with something that’s already fermented (I used a jug of Carlo Rossi red wine) and then distilling that to get the hang of using the still before going through the process of fermenting. You don’t want to spend a week creating the perfect fermentation only to mess up the distillation at the end.  So starting with store-bought beer or wine is a good way to get the hang of the still.

Once you move into fermenting your own mash or wash, most people like to start with sugar (basically a fermented simple syrup). You can add grains for flavor, but the sugar-wash moonshine is hard to mess up. Grains are more finicky, but rewarding. Anyone who has made beer has a leg up in this regard, so if you’re comfortable with home brewing, home distilling from grain to make whiskey will be easy. Wine to brandy is basically the same process, but from fruit instead of grain.

What are some good places for hobbyists to source equipment and ingredients from?
Let’s say you want to make a homemade bourbon. You can find cornmeal easily enough, but you’ll probably want to get ground rye and ground malted barley from a homebrew shop. Most homebrew shops carry a variety of yeasts, and one that’s designed for distillers will give you better flavor and yield than a baker’s yeast (which will work) or a brewer’s yeast (which can be finicky). Good sites for hobby stills are brewhaus.com, hillbillystills.com, or milehidistilling.com.

What does a good home still set-up typically look like?
Assuming you have a stock pot for mashing and a big plastic bucket for fermentation, the last step in the process is the still. Stills come in all kinds of configurations, but the simplest and most traditional is the best: a pot still, basically a closed pot with a tube running out the top, along with some kind of heat source. Because explosions are common around stills, an electric hot plate is safest. The tube from the top of the pot needs to run through a bath of cold water, so many stills have a copper coil that runs through a bucket of cold water. Once you turn on the hot plate and wait for the still to boil, the steam will travel through the tube and into the cold coil. There it will condense and run out the end of the tube. Once you collect this, you have a very crude distilled spirit.

I would recommend taking off what comes out of the still in a single distillation and run it through the still a second time. After the second time, the middle part of run is usually the best — anything that’s coming off the still in the 65-80% range is usually drinkable.

What’s the legal status of home distilling?
It’s illegal to run a fermented beverage through a still to produce spirits; hell, it’s even illegal just to own a still for alcohol production. So while you can make beer and wine for your own consumption, distilled spirits are still a federal crime. That said, the federal government does not prosecute distillers, but works with local and state police. Some states are more friendly to hobby distilling than others. Best advice is to produce limited volumes, keep a low profile on social media, and be especially careful in NC, FL, AL and VA, where there are frequent moonshine busts.

Another thing is that the federal government requires the manufacturers to supply the TTB (formerly the ATF) with the names and addresses of people who have purchased stills. You’re allowed to apply for a fuel ethanol permit, which allows you to make ethanol (whiskey is ethanol, but so is 10% of most gasoline). That’s usually a good thing to have just in case you have to explain your still.

Any distilling tips you’re willing to divulge?
Not everything that comes out of the still is delicious. The middle part, the “heart” is usually the best. The first part, the “heads,” can be solvent-y and taste like nail polish and the later part, the “tails,” can be funky and skunky like bad beer.  The heads and tails can be collected and aged for future distillations. So finding when to collect the whiskey and what to recycle back or throw away can be tricky. I suggest collecting the distillate in small mason jars and then rather than obsessing over the cuts during the distillation, you can simply choose which jars you like after the distillation is done and that can become your “heart.”

How do you age when you’re home distilling?
Aging at a small scale can be tricky. There are oak chips that do a good, but imperfect job of mimicking what happens inside a barrel. You can also get miniature barrels that hold 2-5L of spirit.  These can be notoriously leaky and can overage if you aren’t careful.  That said, white whiskey is often underrated, and people are often surprised that moonshine can actually stand on its own if made well. 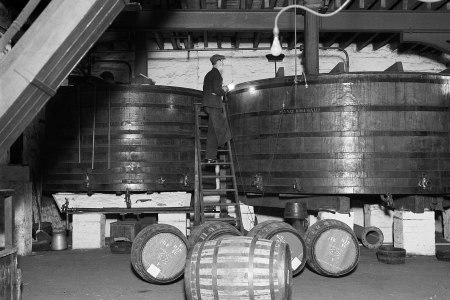