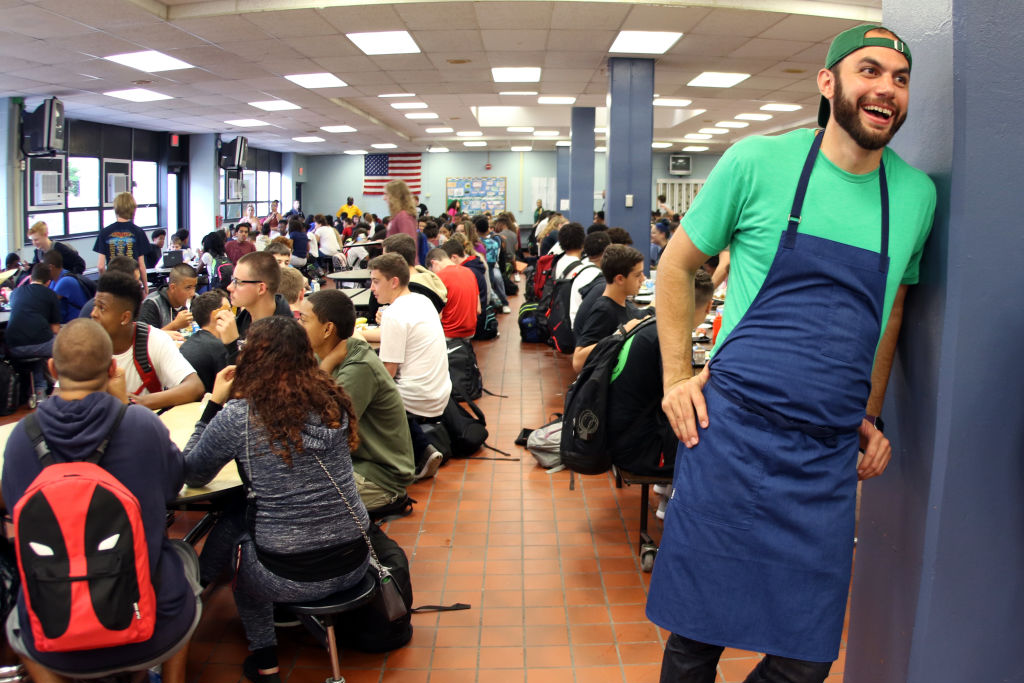 As head chef at René Redzepi’s Noma, ranked as the best restaurant in the world by Restaurant magazine in 2014, Dan Giusti attained a level of culinary success most can only dream of. And then, in January 2016, he decided he’d had enough.

“I was ready to move on from Noma not because I didn’t like it, but it’s a high-pressure environment,” Giusti tells InsideHook. “It definitely took a toll on me, and it was just time to see what was next. At that point I really had the confidence to just look at myself and wonder what I wanted to do next. And I realized that it didn’t have anything to do with a restaurant, or fine dining for that matter. And just thinking again why I got into cooking in the first place, the first thing that came to mind was this idea that I wanted to cook for a lot of people. I wanted to cook for a lot of people often, which I think can be described with the word feeding people. I think it’s very different maybe than cooking for people. So I started to look for ways that I could do that.”

Feeding people meant fulfilling a need and providing nutritious, tasty food to those who needed it most.

“I didn’t like the idea of, say, a high priced, fast-casual type place or anything like that,” Giusti continues. “I wanted to serve a need. So I just got onto this idea of institutional food in general because it checked all the boxes. The idea of you’re cooking a lot of food for a lot of people, you’re cooking for them usually often, you’re cooking for groups of people that typically really need good food. Obviously the world of institutional food has been pretty much ignored in terms of trying to make it better. So the idea of going into an institution, whether it be a public grade school, a hospital, a senior center, prison, whatever it may be, and working with the existing staff to train them, take the kitchen spaces that are typically ill-equipped and not very organized and really set them up to be successful spaces, and then in turn make the food taste better for a group of people that really do need good food seemed like a very good way to achieve what I wanted to do.”

The result is Brigaid, his for-profit company that launched in September 2016 and aimed at reimagining the school lunch. Currently the company is in four school districts — New London Public Schools (Connecticut), New York City Public Schools, Richmond Public Schools (Virginia) and Southampton Union Free School District (New York) — serving up thousands of meals a day. And while they have to adhere to a set of nutritional guidelines provided by the USDA and meet a strict budget (the average Brigaid meal costs $1), Giusti says the most challenging part is coming up with menus that don’t consist of the usual school cafeteria fare but still appeal to children.

“Unfortunately, if you spend a lot of time at a school cafeteria, the issue’s not that the food’s not healthy, it’s the healthy food is not being eaten, which obviously it can’t be too healthy for them if they’re not eating it,” he explains. “So we have nutritional guidelines, we have the budget. We’re very focused on making food that we’re happy with as chefs, and most importantly the kids are happy with. And that’s really the most important thing. In the beginning, we made a lot of meals that met the nutritional guidelines and met the budget we thought were great. We really patted ourselves on the back. We were excited as to what we could produce within those constraints, but we were really missing the mark in terms of what kids would really want to eat. And I think that’s oftentimes what happens is that, as adults or as professionals, we have an idea of what we should be serving kids. And so we serve them that.”

Giusti believes that if we can get as close to the root of the problem as possible that maybe kids will make better choices when it comes to what they eat.

“[T]he nature of the setup in a school cafeteria, you don’t really have the resources to, say, really sit down next to every single kid every single day and get them to try new things. It’s very much dependent on you putting meals out that kids see and smell and they say, ‘Oh, that looks good, I’m going to try it.’ So it really has to be this balance between making food that we’re happy about as chefs, as professionals, that we think are really tasty, that we think are going to get kids [to try it].”

Working with the limited resources of a school cafeteria has forced Giusti to learn how to prioritize because, as he points out, while a restaurant can simply raise prices if they incur extra costs, he doesn’t have that luxury working within the National School Lunch Program’s budget.

“It’s this balance of always prioritizing what is the most important thing, what is going to make the most impact, what are your values, which can be really challenging,” he says. “And I think that’s where this space gets really complicated. Because from afar there are a variety of groups, companies, working on this issue, and they all are trying to make school food ‘better.’ But what does that mean? And for sure we’ve seen that our values can differ very greatly from other organizations in terms of what ultimately we are trying to achieve. So in our thoughts, when it comes to developing menus and working with the constraints, it’s very much just about balancing, prioritization, knowing who you’re feeding, continuously making adjustments as you get feedback, and so on. I think we see that there’s really no right or wrong answer.”

Recently, Brigaid has shifted away from the “one chef, one kitchen” approach it implemented in New London and The Bronx to a training-based model that will allow them to reach more schools, teaching cafeteria staff how to make the most of what they have.

“I think when we first started our product was very much like, ‘This is the menu, this is the food we can make,'” Giusti admits. “And I think that’s almost putting the cart before the horse. A lot of these school kitchens, not only from a training perspective but from the physical infrastructure perspective, are just not set up like professional kitchens. They’re just not ready to get there. So our focus now is we feel that we can go into a kitchen and really get it set up for success. And the training ranges anywhere from basic food safety, all the way up to the beginning of implementing full meals. But a lot of the training has to do with looking at what they’re already doing and saying, ‘Oh, you’re doing this. This is actually pretty cool. But this is how you could do it a little bit better,’ and giving that staff the confidence and know-how how to just make improvements in that sense.”

However, while his training is a vital part of ensuring that kids have access to meals that are both healthy and delicious, Giusti wants to make one thing clear: the credit for “fixing” school lunches doesn’t belong solely to Brigaid.

“No matter what I say, the narrative of this story of this kind of space is always like these school districts are not doing a good job and that we’re coming in to help save the day,” he says. “And I think it’s really important, there’s definitely a misconception of the difficulty of this work. It’s so hard. Coming up with meals that fit the budget, that fit the guidelines, that taste good to kids, and to think to do that when you have no culinary background or no one around who has a culinary background, it’s impossible. So there are these food service directors out there that they’re managing lots of people, they’re overseeing lots of schools, they don’t have a culinary background, and they’re asked to just put these meals out that are great and everyone’s happy. And it’s just not that easy. It’s super difficult.”

Giusti understands that people that might not have the sort of training he does, or any kitchen experience at all, are in a tough spot.

“It’s a shame because those people are the ones that get a lot of negative feedback and parents can be mean about it,” he continues. “And then here we come and it’s like, ‘Oh, well they’re coming to save the day.’ And it’s not that at all. We’re doing a very small part of things. There’s a whole system that has to be maintained in order for these meals to be served on a daily basis. We bring the culinary expertise to the table, and we collaborate with those people. So, for me, it’s always just important that it’s very clear that people understand that this work is just, it’s almost impossible. But through collaboration, in this sense, we feel that you can really make some headway, and that’s what we’re trying to do — just give a hand.”

One Night Out in…Miami, Florida

From Cuban coffee to late-night pinball, this is how you do the city like a local

How Will Generation Z Look Back on the Age of the Millennials?