The 7 best new restaurants that swung open doors this month

You’re here because: You think the fifth of every month should be Cinco de Mayo
You’re dining on: Shared plates of casual Mexican fare like chorizo sliders, mole chicken wings and pork ribs. But we’re more concerned about what you’re swigging: the cocktail menu is to die for, from the ginger-and-mezcal Devil in Disguise to the Smoke Show (tequila, grapefruit, apple bitters and smoked cinnamon).

You’re here because: It’s the first (legal) distillery in Manhattan since before Prohibition. It’s also quite a nice little cocktail bar.
You’re “dining” on: Sliders, wings, potato skins, flat breads and a few other elevated takes on classic bar food. But you’re really here for the cocktails — ask for a Vo-So (Jenny Lee). It’s maybe the first vodka and soda you’ll want to drink.

You’re here because: That outdoor terrace with the panoramic view of the city, for starters. Located in the Pod Hotel, this is your summer Tiki drink destination, complete with lava stone bar tops and bamboo slating on the indoor ceiling, modeled after traditional island huts.
You’re dining on: Old-school Tiki bar snacks (pu pu platters with spare ribs, crab rangoon, etc.) and large-scale drinks — order the impossible-to-say Humuhumunukunukuapua’a, a rum drink served in a fish bowl that serves as an ode to “Forgetting Sarah Marshall.”

You’re here because: It’s an all-day cafe/bistro helmed by Chef Harold Moore, with 20 years of French culinary training under maestros like Daniel Boulud and Jean-Georges to his name.
You’re dining on: Anything and everything that will make you feel like you’re in Paris, from tableside toasted brioche dressed with flambléed fricassée of mushrooms to the humble, whole-roasted “Chicken for Two” served on a bed of foie gras bread stuffing and pommes purée. 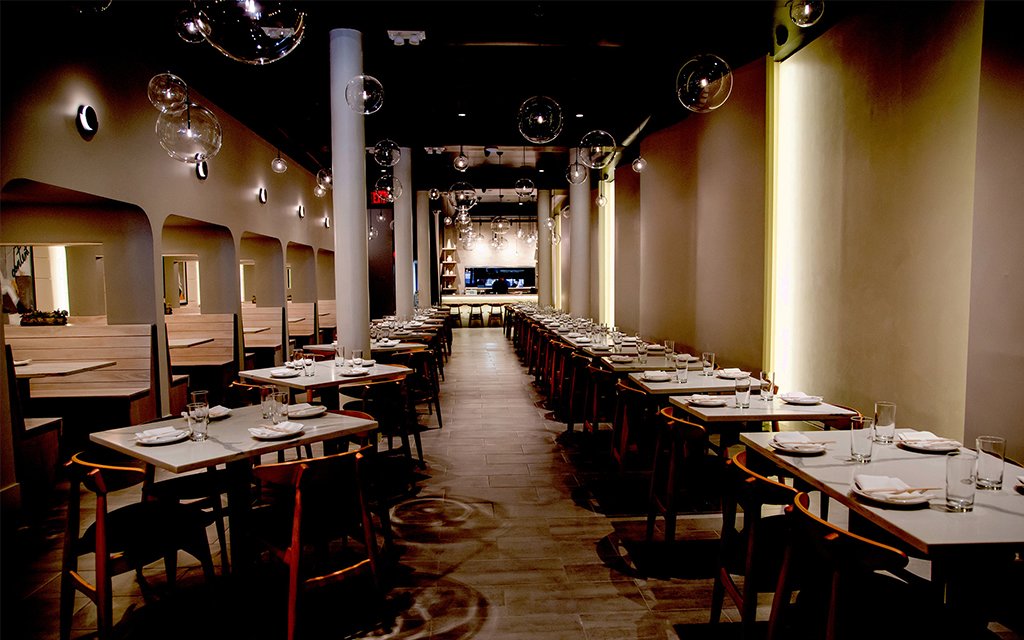 You’re here because: You’re a sucker for luxe omakase, but also — like most red-blooded realists — for fried food.
You’re dining on: A $180-per-person seasonal sushi tasting menu, including rare-find Japanese skewers like deep-fried oyster wrapped with bacon, quail egg with truffle, sesame tofu and caviar and salmon with pickled vegetables.

You’re here because: You went to San Francisco, tried the legendary pies, and never forgot them.
You’re dining on: Anthony Mangieri’s seven signature pies, each a handmade 12-inch round made from naturally leavened dough then baked in a wood-fired brick oven. Plus: one new pie for the LES location, the Concetta: four kinds of tomatoes, parmesan and parsley.