The Recipe for “Narcos,” According to Real-Life DEA Agents Who Lived It

The men who inspired the crime drama in Colombia set the record straight.

“It just tells you there’s some sick people in Hollywood to come up with some of these ideas,” retired Drug Enforcement Administration (DEA) agent Steve Murphy told his audience.

That should mean something coming from Murphy, the man who helped chase down Colombian cartel kingpin Pablo Escobar, perhaps the most infamous drug lord of all time.

Murphy’s exploits, alongside DEA partner Javier Peña, in the late 1980s and early 1990s form the basis of the Netflix drama Narcos, and his quip was in response to a question he says he gets all the time: how much of the show is real? With his answer, Murphy revealed that the recipe for Narcos comes in threes.

“One-third of the show is true,” Murphy said. “Those events happened and they are depicted correctly. The second third, those events happened, but they’re not depicted the way they actually occurred. They dramatize it. They glorified it. They made it more exciting. They added sex to it and all that kind of stuff. And then the last third, well, that’s just straight out of Hollywood.”

It was about that last bit the Murphy suggested he was weirded out by what the “Hollywood” writers came up with. The DIA’s account of the talk leaves out details about which of the show’s shockingly violent and nihilistic scenes are made up, but there was certainly no shortage of carnage in the real-life version of events.

“Pablo Escobar killed a lot of innocent people, so it’s personal for us,” Peña said. “I’ve lost a lot of friends who were killed by Escobar…” 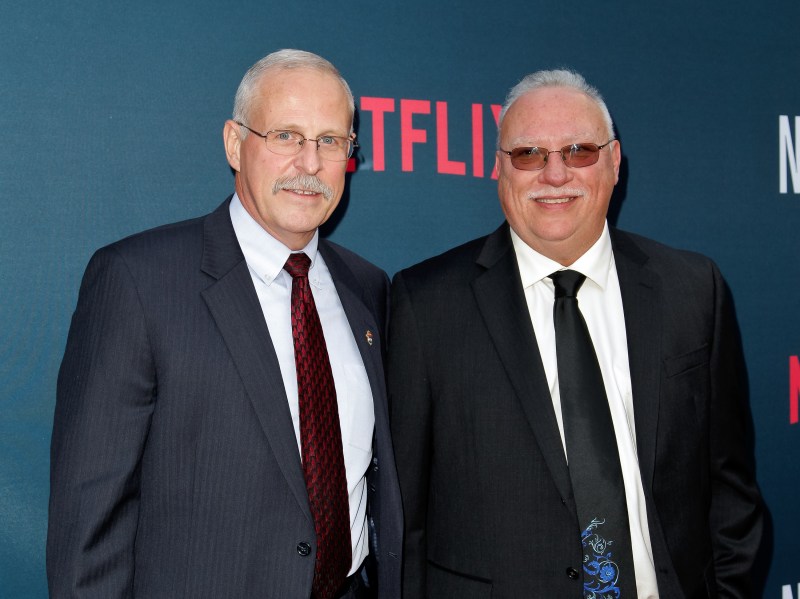 Murphy and Peña were speaking to the Defense Intelligence Agency (DIA) late last month as part of the DIA’s “Masterminds” guest speaker series. The DIA said the pair’s DEA work overlapped with their own because both agencies “play a role in transnational organized crime threats – to include narcotics and threat finance through the America’s Regional Center.”

The ex-DEA agents, the DIA said, “represented a wealth of knowledge and experience.”

Narcos, which started airing in 2015, for the first two seasons traced the rise and fall of Escobar, and the morally-flexible lengths to which the DEA and Colombian law enforcement went to find and kill him in 1993. The most recent third season explored the takeover of another cartel in the wake of Escobar’s death.

Netflix has announced that the show’s fourth season will move to Mexico, but already a real-life tragedy mirroring the show’s violent semi-fictional story has struck. In September 2017 a location scout for the show was found murdered about an hour outside Mexico City, reportedly shot multiple times.

What Should You Do If You Keep Waking Up in the Middle of the Night?

Festival Organizer for Woodstock '99 Blames Women for Their Assaults
The Best "Buy It for Life" Gear We've Ever Owned
The Obsession With the Big Penis From Netflix’s “Sex/Life” Isn’t Just About Size
These Are the Pop Stars With the "Cleanest" and "Dirtiest" Lyrics, According to a Study