Gianni Versace’s Assassin Was a Killer Like Few Others

When Andrew Cunanan shot Gianni Versace outside the designer’s home on July 15, 1997, he was near the end of a trail of blood that stretched across the nation. A trail that even years later many struggle to understand.

Cunanan, after all, was always a surprising killer. He’d grown up in sunny southern California, a golden boy with a genius IQ. In his twenties, he’d been a high-end hustler, using his looks, intelligence, and total lack of compunction about lying to lure highly successful men into romantic traps. He used their time, money, cars, and their influence to live a lavish lifestyle, partying with guys closer to his own age on the gay bar scene.

Cunanan was also a chameleon, easily becoming whoever he felt he had to be to get what he wanted.

A liar, a user, a chameleon. There are many men and women like that out there. They leave trails of broken hearts, empty bank accounts. They sow mistrust and unhappiness, yes—but they don’t become spree or serial killers. Petty criminals, con artists, or something more exotic like bigamists.

Then there was Andrew Cunanan.

On April 29, 1997, Jeff Trail was found dead in a Minneapolis apartment owned by Cunanan and a former lover, David Madson. Dead for two days, Trail was bludgeoned with a claw hammer.

Less than a week later, on May 3, Madson was found dead from gunshot wounds on the shore of East Rush Lake in Chicago County, Minnesota.

The day after Madson’s body was discovered, millionaire Lee Miglin was found in his Chicago, Illinois residence. Miglin suffered a gruesome, violent death—restrained with duct tape, stabbed 20 times with a screwdriver, his throat slashed with a hacksaw.

By then police knew who they were looking for. Andrew Cunanan had gone from a gay hustler whose main asset—his looks—had begun to fade to one of the FBI’s Top Ten Most Wanted. 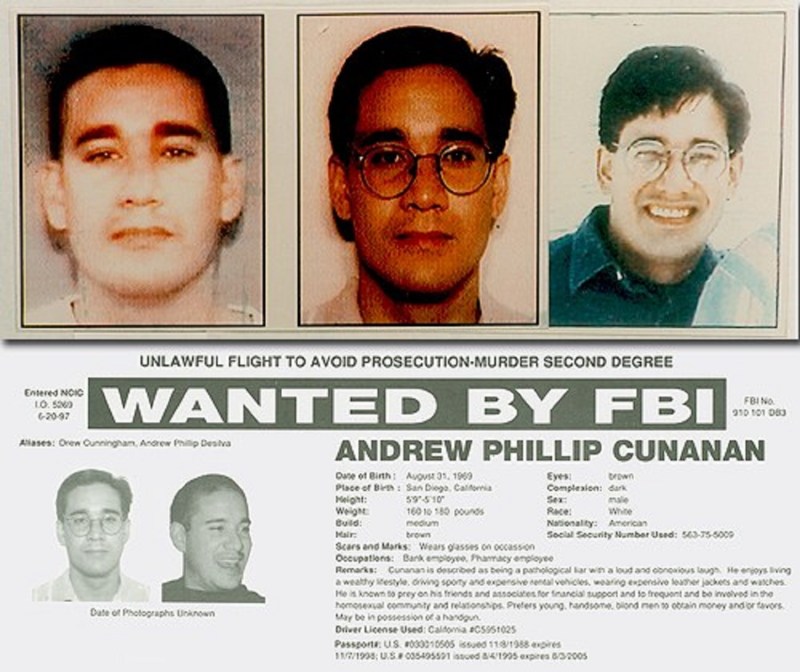 By the time Miglin’s body was discovered, Cunanan had made it as far as Pennsylvania driving Miglin’s Lexus. Once there he made a mistake and activated Miglin’s cell phone. Police were able to monitor the cell for a while as its signal bounced off towers into New Jersey.

Then he vanished completely for a month.

On the morning of July 15, Gianni Versace had just taken a walk in his Miami Beach neighborhood. One of the world’s premiere fashion designers, he was a celebrity in his own right, rubbing elbows with the likes of Princess Diana, Sting, and supermodel Naomi Campbell.

As he mounted the steps to the mansion he shared with his partner Antonio D’Amico, someone shot Versace twice with a .40 caliber weapon. The shooter’s description matched Cunanan. The truck he’d stolen from the Pennsylvania cemetery was found in a parking garage not far from Versace’s residence. Yet once again, the elusive killer was in the wind.

In the end, police would achieve no real satisfaction in their pursuit of Cunanan. He’d broken into a houseboat after the murder and as law enforcement was finally closing in on July 23, he shot himself. He did it with the .40 caliber handgun he’d used to kill three of his victims, including Versace.

“I am a cipher amidst the immense splendors of this place,” Cunanan once wrote to David Madson. He was referring to Venice, Italy.

There’s been a movement among many in the media to not analyze or even mention a killer, if possible. In principle that makes sense—it’s the victims who deserve to be remembered, not the person who murdered them.

Yet when it comes Cunanan, it’s hard to avoid the desire to figure him out.

Even the FBI seems to admit they have a tough time with that, writing in an article published on the Federal Bureau of Investigation’s website in 2014 that Cunanan’s “murderous spree” began for “reasons that remain unclear.”

That is, it’s always been hard to determine why Cunanan escalated from mere lying hustler to cross-country killer.

Due to their position in pop culture, serial killers are easy to define: they kill more than two victims separately over time. There is what behavioral analysts call a “cooling off” period between each murder. That period can be weeks, months, or years. They are often—but not always—sexually motivated.

Spree killers commit more than two murders with very little break between crimes, and frequently while traveling—either on the run or simply wandering. Often, they know the people they kill. And as criminology professor Scott Bonn wrote in Psychology Today in 2014, a murder spree is “triggered by emotional upheavals and often [involves] victims who are acquaintances or family of the perpetrator, while serial killings are generally unemotional, driven by long-term and deep-seated fantasies, and involve victims who are unknown to the killer.”

There were sexualized elements of Cunanan’s crimes, with bondage paraphernalia found at some crime scenes. Yet the murders weren’t expressly sexual in action. The murder of William Reese, for example, was the utilitarian act of a psychopath: Reese was an obstacle to Cunanan obtaining a new, untraceable vehicle, so the killer eliminated him.

Cunanan has been called a serial killer, but he meets the criteria of a rage-driven spree killer, in the end. What spurred his rage? As Newsweek reported in August, 1997, the former boy toy and high fashion-loving party monster  “was becoming pudgy and dissolute, unable to find a sugar daddy to keep him in Versace underwear.”

His parasitic lifestyle was falling apart, and he hated the world and anyone who represented what he wanted out of life—like a charismatic star fashion designer living happily in his Miami mansion with his lover.

I think that on some level Cunanan himself inadvertently hinted at what was inside him in throwaway, lighthearted statements like those in his letter to David Madson.

He was an emotional cipher, happily exploiting others for his predatory ends. That’s what he hid behind his “natural” mask.

Everything that led up to the assassination of Gianni Versace was what came when he realized the masquerade was over.