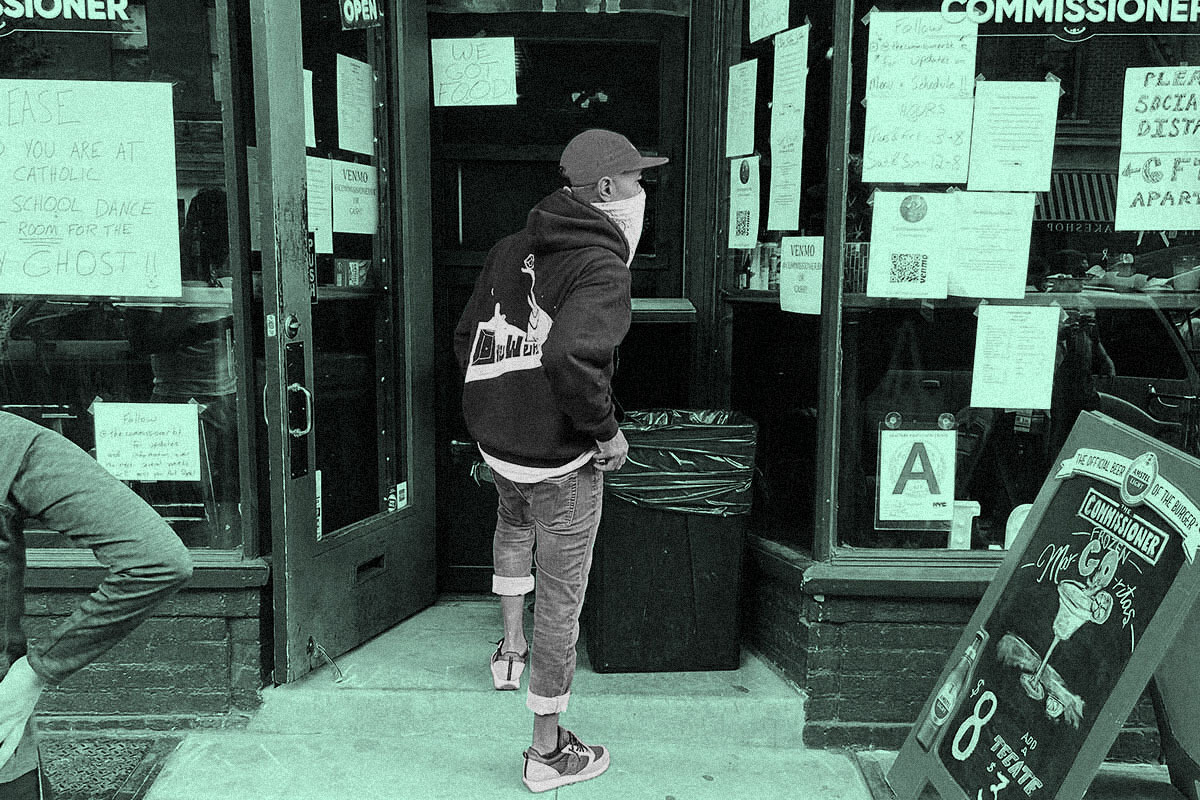 Masked patrons waiting outside for drinks at a Brooklyn bar
Kirk Miller/Mike Falco
By Kirk Miller / May 28, 2020 9:37 am

I hadn’t seen my friend Todd (not his real name) during the first two months of stay-at-home orders in New York. Unlike me, he lived alone. And he was recently out of a job.

Weekly Zoom calls — with delivery booze — were nice. But with the weather warming up, we needed to get outside and well, imbibe. And we decided we were going to chance it together, albeit six-plus-feet apart.

Lest we come off as flippant or irresponsible, know that Todd and I discussed some key factors before deciding to attempt a bar crawl in New York when we’re not even out of Phase One of the state’s reopening.

One: Yes, it’s OK to be outside and take a walk.

Two: Bars and restaurants are increasingly offering curbside ordering and pick-up. As long as they’re being sanitary inside and everyone is practicing social distance in line, it’s safer than than your grocery-store run.

Three: The idea of having a coronavirus buddy outside your household is, at best, controversial. Then again, isolation and loneliness can be extremely harmful to your health. As Carolyn Cannuscio, a social epidemiologist at the University of Pennsylvania, told Vox, you need to “be very explicit about what the agreement is [with your coronavirus friend], and try to choose someone who’s got [a similar level of risk].”

Without breaking personal privacy or HIPAA compliance about our health situation — and while unofficially consulting with a close friend who’s a doctor — we determined that we could attempt a meet-up if we stayed at a decent range apart, didn’t share food or drink, wore masks and basically did all the other things we do when we have to go out. (Bonus: No delivery fees, either.)

With that established, we let the crawling begin

Todd thought he felt “attacked” because literally a day after our first bar crawl, NYC’s Nightlife Mayor Ariel Palitz sent out a message about not congregating in front of bars or drinking in public.

The first point I understood, which brings us to:

Rule one: Take your drinks and go. We’ll get to “where” in a moment.

Our first stop in Brooklyn was to a relatively new Park Slope sports bar (three years old) offering $7 drinks. Between there and the bar next door, the sidewalk was packed. And someone had literally set up a tailgating camp in a parking space outside the bar. Not cool.

Rule two: Whatever they give you your drink in, do your best to mask it.

While I appreciate the Nightlife Mayor’s advisory, I think the city needs to accept that we’re going to be outside and we’re not just going to take solitary, teetotaling walks. “The rules against [open container] date back to the end of Prohibition, when the government had to protect people against bootleg hooch that made people blind. We’ve come a long way since then,” Fort Defiance’s proprietor St. John Frizell told us back in March when the lockdowns began but cocktail deliveries were legalized.

If the drink can pass for something non-alcoholic, I say go with it. That means the pouches, plastic bottles and coffee cups you’ve been getting are just fine. On the other hand …

… some places are going to give you very conspicuous drinking vessels, like the very delicious Old Fashioneds — in translucent glass bottles — that we ordered at Sweet Polly.

So, rule three: Bring your own containers.

I brought an insulated thermos, my own straw and a smaller insulated mug during my sojourn. With all that, you’ll need a small pack, and I’d certainly add extra sanitizer, my own napkins/paper towels, wipes and additional plastic cups.

That thermos did me well — I used it to swill half a bottle of the pre-made Old Fashioneds (along with a side cup of ice). That meant it was sealed and sippable as I walked.

Consider it useful recycling. You’re not adding waste and I’ve been able to wash and reuse these containers for my own syrups, batched cocktails, etc.

Rule five: Stay in your ‘hood, or close enough

Which means staying off public transportation — what you’re doing isn’t essential — and even if you have a car, try to minimize your footprint on the city. Also, walking is healthy!

Rule six: Before you hit a bar, look at the venue’s social media

The rules and hours for every bar can be altered at a moment’s notice. There are random closed days, preferred methods of ordering/paying (“you must call ahead” vs. “we take walk-ins,” cash vs. Venmo vs. cards, etc.) and constantly updated menus. The key here is to get in line, order quickly and then head away with your drink. Everyone’s happy to see you and they’ll be friendly, but they don’t want you overstaying your welcome.

Rule seven: You don’t have to just walk or go home. Find a place you can relax.

Prospect Park seemed way too crowded at first, but a 10-minute walk from a bar on Atlantic into the park landed us at two sets of benches that were empty and near a field where all the groups hanging out were small in size, appropriately distanced from each other, masked and overall relaxed but vigilant (side note: Good job, Brooklyn!). But a not-busy promenade, random grassy area or rooftop would work just as well.

And, yes, relax. Talk if you’re with someone. The park is ideal, because you can people-watch and point out, say, the topless weirdo on the giant unicycle using oversized crutches as brakes. Sip your drink, but don’t share. Take in the sun. Keep your mask on when you’re not drinking or when people get nearby. And keep track of what you’re putting in your body, people.

Turns out drinking the equivalent of six Old Fashioneds in a two-hour timespan when you’re not used to being out and it’s warm out … well, things can get hazy. At the very least, when you’re ordering your to-go drinks, also get some water and food (you’re legally supposed to do the latter, anyway).

The important thing is I made it home alive and, at least by the next day, well. And both my friend and I felt a lot better than we had in two months.

I can only vouch for the places within walking distance near me, but I asked a few drinks writers and friends in different parts of the city for their to-go bars of choice. A few of our picks, below: