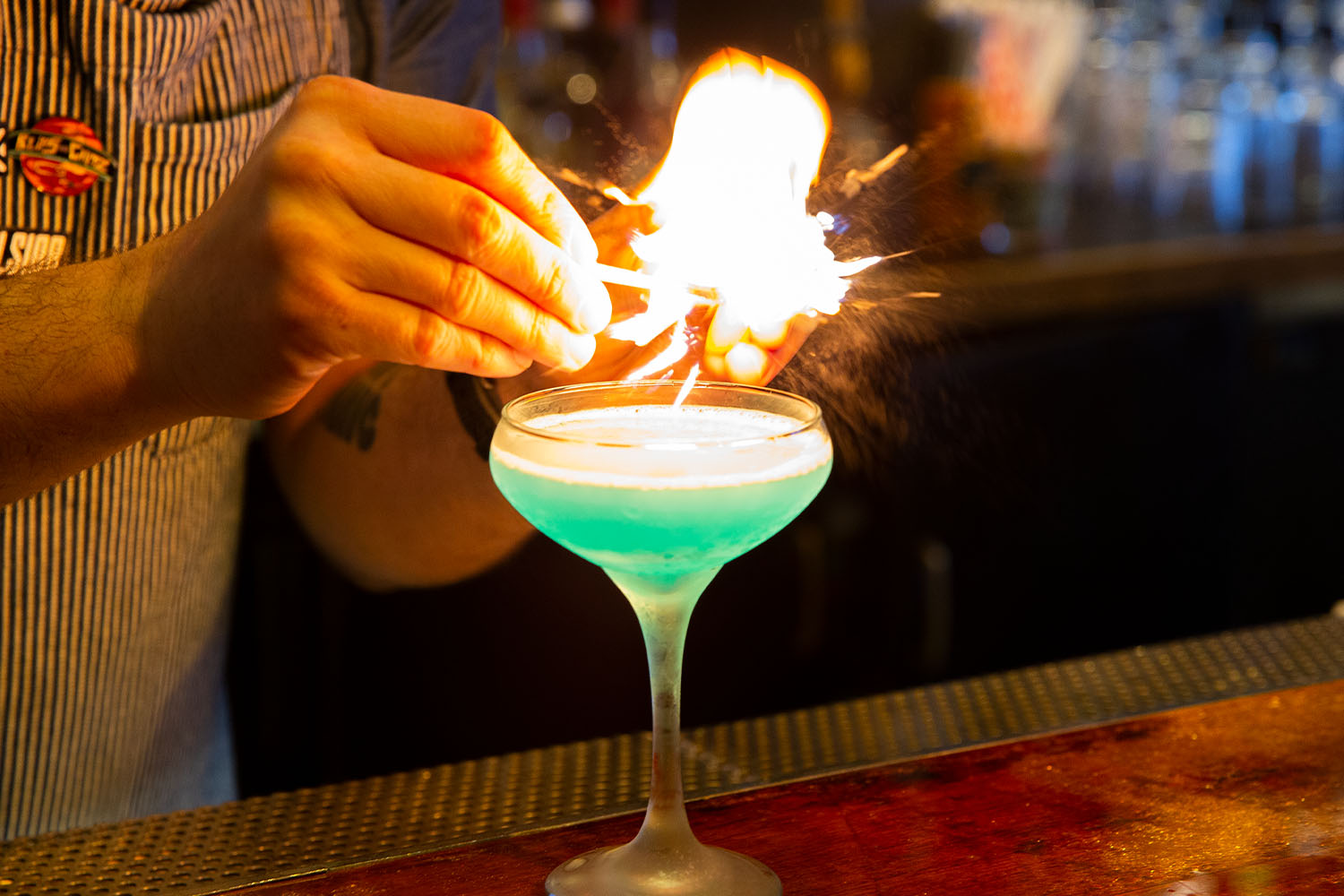 Gun Metal Blue is an elevated take on Hand Grenade, via NYC's Porchlight.
Mike Falco
By Kirk Miller / February 20, 2020 5:35 am

If you’re not in New Orleans for Mardi Gras, that’s quite OK. It can be kind of a mob scene this time of year, and the cocktails you’ll find on Bourbon Street are little more than novelty (and a means to a rather ugly end of night).

Which doesn’t mean NOLA-inspired tipples like the Hand Grenade or Hurricane aren’t fun or don’t have their place and time. They can actually serve as inspiration for some more elevated drinking, a feat effortlessly accomplished by the cocktail team at NYC’s Porchlight.

Opened in 2015, Porchlight was conceived as a “New York bar with a Southern accent,” as beverage director Nick Bennett tell us. “We wanted to focus more on cocktails. And when you say Southern and cocktails, you think New Orleans.”

So you’ll find riffs on the Hurricane, but also more respected drinks like juleps and the Sazerac. As well, the bar uses fresh ingredients, homemade syrups and recipes that both nod to the past and offer up new twists.

Starting Thursday and running through Fat Tuesday, Porchlight is offering up a special Mardi Gras menu, featuring a few of their Southern cocktail standards and a few new drinks. Below, we spotlight four of these riffs on Carnival season classics, with help from Bennett and head bartender Zach Masminster.

Stir and strain into a rocks glass with no ice, with a lemon coin expressed and discarded.

Think of this cocktail as a throwback to the original recipe. “The Sazerac was originally made with Cognac, not rye,” as Masminster explains. “And Herbsaint was used during the time absinthe was banned in the U.S. — it’s very similar. And Peychaud’s is what a Sazerac is known for.”

Whip shake, strain into a Hurricane glass over pebble ice, garnish with an orange and lemon coin.

The Storm Brewin’ is a “day one” cocktail for Porchlight, a menu favorite from the opening days and an elevated riff on a Hurricane.

Whip shake, serve over ice in a snifter and top with fresh grated nutmeg.

To be clear, this isn’t a clarified milk punch. The ingredient here is literally just … milk. “It’s a brunch drink, almost like a stripped down egg nog,” says Masminster. “One of our liaisons to New Orleans used to work late nights down there, and in the morning after work, he’d order one of these.”

Shake and strain into a coupe. Garnish with a flamed orange coin.

Based off the popular Hand Grenade, the Gun Metal Blue is also a permanent fixture at Porchlight. It’s also blue, instead of the traditional green. “I think the actual Hand Grenade is made with green Kool Aid and Everclear,” laughs Masminster.

And if you’re in New Orleans, Bennett advises to just bite the bullet and go for the bright drinks that come out of the slushie machines. “When you’re there, you have to lean into that,” says Bennett. “There’s no reason to say, ‘I can’t drink these test-tube shots.’”

All photos and art direction by Mike Falco.

Related: How to Avoid Being a Total Douche at Mardi Gras