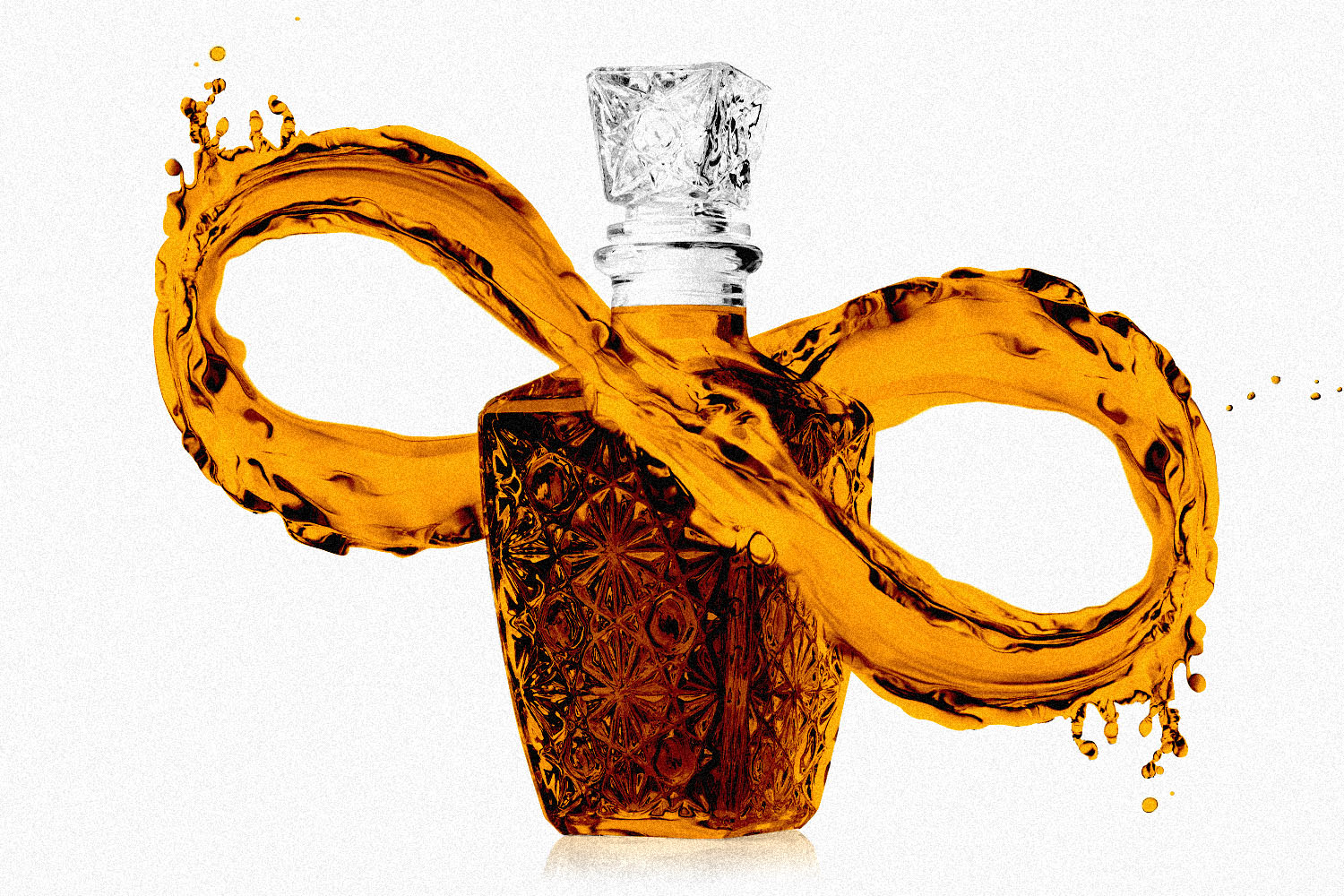 As I write this, I’m sipping on a rum that’s not quite like any other I’ve had before. It’s funky and tropical on the nose, with notes of banana bread and fermented fruit. The palate is slightly sweet with vanilla, but also hot and high-proof, and hints of cinnamon and spice linger on the finish. If you’d like to try it, I’m afraid you’re out of luck: this rum exists only in my apartment, and it will taste different the next time I sample it, too.

The rum was poured from my favorite of my “infinity bottles.” The infinity bottle is a trend that has taken hold among spirits nerds as a way of creating a unique blend at home. The idea is pretty simple: You take an empty bottle and start creating your own personal blend of a chosen spirit, typically a whiskey. Then you keep adding to it over time. If you have an infinity bottle of bourbons, for example, you might drink some of it one night and then top it off with something new, creating a blend that continually evolves in the bottle.

The concept has been traced back to a 2012 YouTube video by Ralphy Mitchell, who compared it to the solera system of ageing sherry. The key to a solera is that it never runs empty: When a sherrymaker withdraws some wine for bottling, he tops the barrel off with sherry from a younger barrel. Individual solera systems can go back decades, growing more complex with time. You probably don’t have room for a chain of barrels in your own home, but you can have fun creating a similar effect within a single bottle.

Infinity bottles have become a niche hobby among whiskey enthusiasts, although there’s no reason to limit the practice to brown spirits. That said, it makes sense to decide on some constraints rather than just throwing any and all liquors indiscriminately into the same vessel. If you choose to make a whiskey infinity bottle, you’ll need to decide whether to focus on a single style — rye, Irish, Scotch? — or to combine them all into one weird blend.

You’ll also need to decide on your approach to blending. Are you trying to construct a specific flavor profile, carefully selecting elements to reach a set destination? Or would you rather add spirits willy-nilly, hoping for pleasant surprises while accepting some less than savory combinations? Some whiskey drinkers compromise by pouring the last ounce or so of every bottle into the blend, such that it develops as a kind of chronicle of the all the whiskeys they bring home over time. Many blenders also keep a running tally of all the ingredients they add to their bottles, if only for curiosity’s sake. (If you can’t bear to pour a rare, expensive or long-aged spirit into an infinity bottle, think of it this way: by doing so, you’re ensuring that traces of it live on indefinitely.)

I’ve experimented with different tactics to varying degrees of success. For my infinity gin, I took an everything-but-the-kitchen-sink approach, adding in a little bit of every gin I could get my hands on. The result is not great; the flavors are muddled and disjointed. I might throw it into a punch someday, but I wouldn’t drink it in a Martini. It’s noticeably inferior to just about any standard London dry I could buy at the liquor store.

I took a little more care with my infinity whiskey, which I’ve limited to American whiskeys. It’s mostly bourbons and ryes, which share the common element of having aged in new, charred, American oak barrels. This gives the blend enough unity to work well, with occasional additions like a wheat whiskey or bourbon finished in port casks to add interest. My one significant stumble was adding a dose of extremely flavorful mesquite-smoked whiskey. Even in a small amount, it drastically altered the taste of the blend. As I consumed some of the infinity bottle and topped it with new whiskeys, this smoky note gradually took on a more pleasant background character. Now I’d rate my blend a solid B-. It’s not something that would blow you away sipped neat, but it’s perfectly suitable for whiskey sours and other cocktails.

Infinity rum has been my best success. Rum strikes me as an ideal spirit for an infinity bottle: it’s a singular thing, but unconstrained by rules. “Rum embodies America’s laissez-faire attitude,” Wayne Curtis wrote in his book And a Bottle of Rum. “It is whatever it wants to be.” As long as it begins with sugar cane, rum can be made in myriad ways and take on all kinds of characteristics.

I took a very intentional approach to this bottle, seeking to a create a blend that combines attributes of my favorite rums. My infinity rum has been going since January 2017, and is now comprised of 31 different sugar cane spirits. Light, straightforward rums are the foundation of the blend, but these are heavily supplemented with funkier spirits like rhum agricole from St. Barth’s, clairin from Haiti, cachaça from Brazil, Batavia-arrack from Indonesia and pot-still rums from Jamaica. Sweeter, heavier demerara rums from Guyana round things out and provide depth. Though I’m constantly making new additions, I try to keep the basic profile the same. As a result, when friends come over, I’m able to offer them a delicious Daiquiri or Rum Old Fashioned they can’t get anywhere else.

The fun of making infinity bottles for individual spirits got me thinking about stretching the concept even further. What about an … infinity cocktail? Instead of blending just a single spirit, you could blend a batched version of all the ingredients that go into a drink. You wouldn’t do this with highly perishable ingredients like citrus juice, but it’s an intriguing possibility for spirit-forward cocktails. You could make a bottled Infinity Manhattan, for example, with an ever-evolving mix of ryes, bourbons and vermouths. Why not?

For my own experiment, I created an Infinite Negroni. The classic Negroni recipe is equal parts gin, Campari and sweet vermouth, but the cocktail has inspired an endless variety of riffs that make substitutions for some of these ingredients. My bottle started with a foundation of the classic Negroni, but I branched out from there with more exotic additions. My only rule has been that I always add to the bottle in strictly equal parts of spirit, aperitif/amaro and vermouth/wine. Regular additions of the standard recipe keep the flavor profile in the ballpark of the classic Negroni, while more esoteric ingredients take it in more unusual directions.

My Infinite Negroni, which I keep refrigerated to preserve the vermouths, has been developing for well over a year now and has more than 50 ingredients. Some of these are pretty close to the usual gin, Campari and sweet vermouth, while others are wildly different: mezcal, Fernet-Branca, sherry. The resulting cocktail is recognizably Negroni-like, but more complex. Most importantly, it works. It’s a tasty 50-ingredient cocktail that I have at the ready in my refrigerator, and all I need to serve it is a glass full of ice cubes and an orange peel to twist over the top.

As a working bartender and cocktail writer, I’m typically on the lookout for recipes with exact proportions that yield the right result every time. Making infinity bottles is an opportunity to embrace irreproducibility, to enjoy fleeting combinations that will never exist in quite the same way ever again. Like most experiments, they don’t always turn out perfectly. That’s part of the fun, however, and false steps can be adjusted over time with the addition of new ingredients. And when they work, they can work beautifully, a uniquely personal reward for putting your spirits at risk.