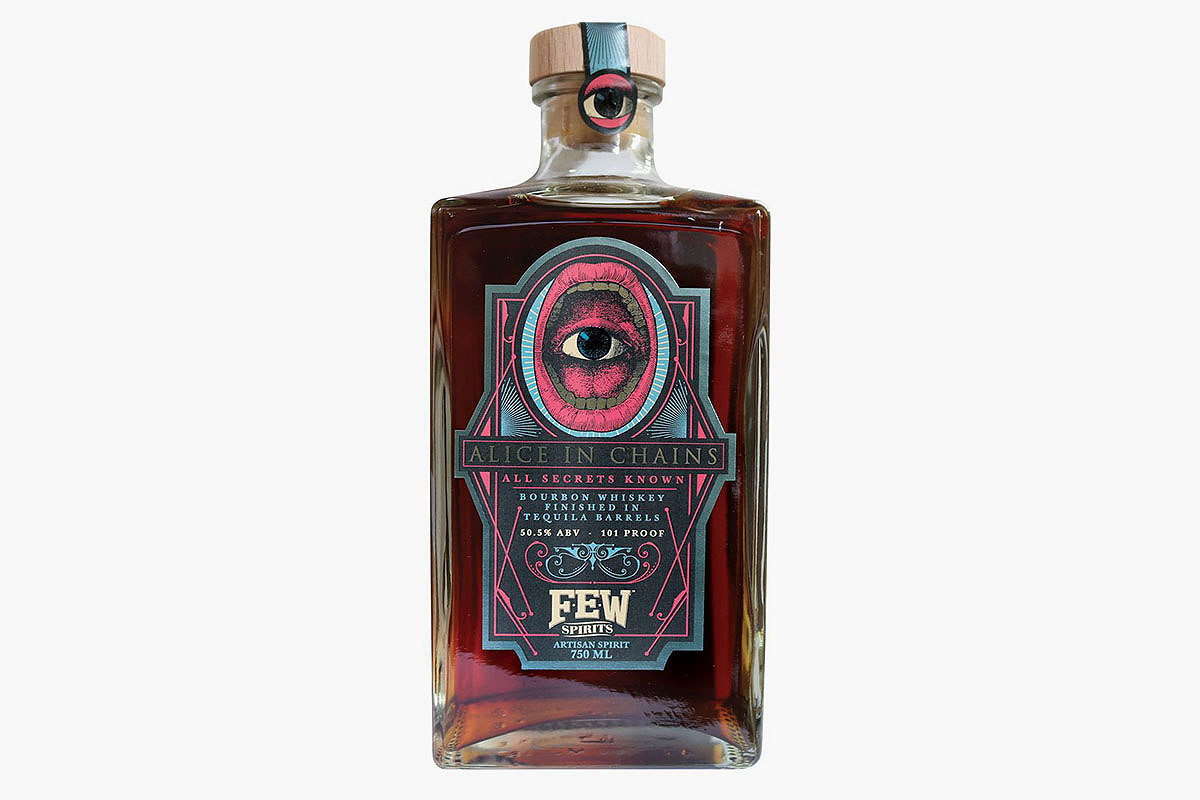 Alice in Chains collaborated with FEW Spirits for this limited release
By Kirk Miller / January 16, 2020 8:21 am

What we’re drinking: All Secrets Known by FEW Spirits

Where it’s from: FEW is an Illinois-based distillery that helped overturn still-existing Prohibition laws in 2011 so they could craft grain spirits within Evanston’s city limits. You’ll recognize the FEW bottles by their rectangular shape and colorful labels, which replicate woodcut prints and usually feature images from the 1893 World’s Columbian Exposition in Chicago. They also source their grains regionally. Though better known for their bourbon, FEW’s Breakfast Gin can really start your day off on a good note.

Why we’re drinking this: All Secrets Known is a limited-release bourbon made in collaboration with the iconic Seattle band Alice in Chains (it’s also named after a 2009 AIC song). Unlike most of FEW’s releases, the bottle features a custom-designed label from artist Justin Helton. The other twist here? This high-rye bourbon’s spent an extra six months finished in ex-tequila barrels.

How it tastes: Nothing like Seattle, but a lot like a spicy bourbon with the mouthfeel and distinct sweetness of agave. Not a lot on the nose, but you’ll get the vanilla and butterscotch of a bourbon and a little kick from the rye. Great on its own, this could work well in most bourbon-based cocktails (yes, like the Old Fashioned). It won’t turn whiskey drinkers into tequila snobs or vice versa, but if you’re a fan of both spirits, you’ll certainly appreciate how well the two styles play with each other.

Fun fact: As a teenager, yours truly met AIC singer Layne Staley in Seattle immediately after the band’s launch show for their first major label album. He signed a cassette single for me with the phrase “Don’t touch that, you’ll go blind.” RIP, Layne.

Where you can get it: Released late last fall, All Secrets Known is available in limited quantities in California, Colorado, Illinois, New York and Washington. It sold out at ReserveBar and a few other online stores, but we did find a bottle for $99 at De Wine Spot.

How Running Barefoot on Pavement Will Help Prevent Injury