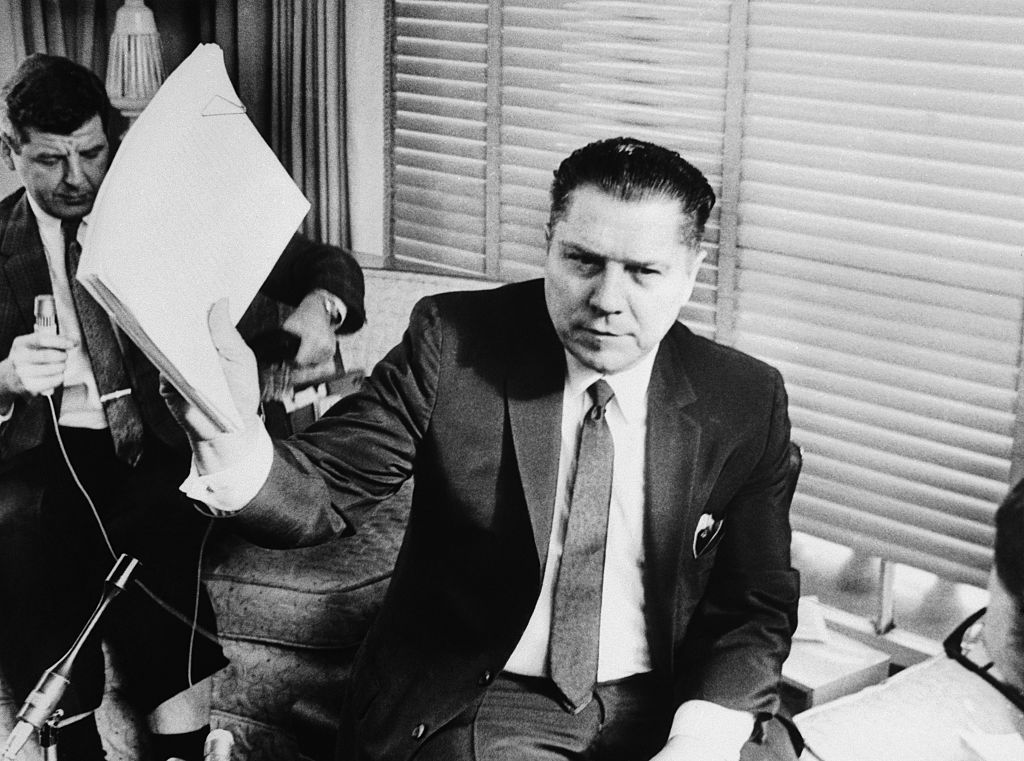 A new book explores the legacy of Jimmy Hoffa and the life of his associate Chuckie O'Brien.
Getty Images
By Tobias Carroll / January 14, 2020 9:51 am

While it might be presumptuous to deem American culture as being in the midst of a Jimmy Hoffa renaissance, it wouldn’t be far from the mark, either. Take one high-profile movie in which Hoffa plays a significant role — that would be Martin Scorsese’s The Irishman — and a nation where debates over the role of unions remain heated, and the result is a moment in time tailor-made to revisit the legendary labor leader’s impact on history.

Jack Goldsmith’s book In Hoffa’s Shadow offers a fresh perspective on Hoffa, his disappearance and his influence on decades of American history. Goldsmith is best-known for his work as a legal thinker: he teaches at Harvard University, is a founder of the national security website Lawfare and publicly broke with the George W. Bush administration in 2004.

But Goldsmith also has an unexpected connection to Hoffa: his stepfather, Chuckie O’Brien, was Hoffa’s right-hand man for years. O’Brien was played by Jesse Plemons in The Irishman, a film about which Goldsmith recently wrote for The New York Times. (For the record, O’Brien is not a fan.) O’Brien was also the inspiration for the character Robert Ciaro, played by Danny DeVito in his 1992 film Hoffa; and for Tom Hagen, Robert Duvall’s character in The Godfather. And yes: Goldsmith does address the surrealism of one man being played on film by three actors as disparate as Plemons, DeVito and Duvall.

Goldsmith makes a convincing argument that the conventional wisdom surrounding O’Brien’s involvement in Hoffas’s disappearance — to wit, that he was involved — is incorrect. But he also documents his unorthodox bond with O’Brien, and explores the ways in which some of the methods used to investigate Hoffa continue to have repercussions in the 21st century.

In Hoffa’s Shadow opens in 2003, during Goldsmith’s time in the Office of Legal Counsel during the George W. Bush administration. “In the course of doing that, I learned about the illegal surveillance of my stepfather back in the fifties and sixties,” he tells InsideHook.

“As I was telling that story, I set out in the book to basically tell the story of my stepfather and Jimmy Hoffa — and their relationship and what they went through.”

As he was writing In Hoffa’s Shadow, Goldsmith soon found that past and present intersected in unexpected ways. “I kept finding that in the course of talking about my relationship with Chuckie, my professional career kept intersecting with that,” he recalls. “That just ended up being part of the book, doing both at the same time.”

In Hoffa’s Shadow is a book where motifs recur again and again. Goldsmith discusses his own childhood, and how his mother’s marriage to O’Brien changed it — and how O’Brien’s own connections to organized crime (and rumored involvement in Hoffa’s disappearance and/or death) caused friction between stepfather and stepson. Goldsmith pairs that with an account of O’Brien’s youth and coming of age, as well as how he first encountered Hoffa.

Given O’Brien’s long life and what Goldsmith describes in the book as “Chuckie’s Omertà connections,” the man at the center of In Hoffa’s Shadow proved to be both an invaluable source of information and one who wasn’t necessarily able to be candid about certain subjects.

“Chuckie was one person that I had full access to,” Goldsmith says. “We spoke for over a thousand hours for the book.”

O’Brien’s silence on some subjects led to a few complications in the narrative. Goldsmith notes that “he was not always forthcoming with me. He tried to signal when he wasn’t being forthcoming about the things he couldn’t tell me.” In some cases, that left Goldsmith with more historical digging to do; in others, the standard fact-checking one would need for a historical narrative of this scope.

“Even when he did tell me things,” Goldsmith says, “I did my very best to corroborate everything he said in one way or another.” He also spoke with the FBI agents who investigated Hoffa’s disappearance in the 1970s; O’Brien’s role in that investigation, as well as his efforts to clear his name, become one of the most compelling threads in Goldsmith’s book.

But for all of the ways in which In Hoffa’s Shadow deals with events that took place in the 20th century, it’s also a book with plenty of implications for the 21st. To begin with, there are the questions of governmental surveillance and executive power — notably, the ways in which Robert F. Kennedy’s pursuit of Hoffa anticipated issues we’re still wrestling with today.

“The same basic issues that I was dealing with in the 2000s with warrantless surveillance were the same set of issues that went back to the beginning of the surveillance state back in the 1930s and 1940s,” Goldsmith says. “When there was a new surveillance technology that was discovered or developed, the executive branch has an overwhelming appetite to use it because it enables them to suck up all sorts of information that, from their perspective, is relevant to solving a crime or preventing harm to someone.”

Goldsmith’s description of this behavior is one that numerous administrations across party lines have engaged in. “It definitely transcends ideology,” he says. “It’s an executive branch thing.”

But that’s not the only area where the book’s historical narrative feels decidedly contemporary. As befits a book with Jimmy Hoffa’s name in the title, there’s also the role of organized labor in the narrative at a time when unions and unionization efforts are again prominently in the news.

“I think with inequality being such a front and center issue in the country and labor being in such a poor spot, it’s natural to look back to the time when unions were more powerful,” Goldsmith says. ”And there’s no better person to embody that than Hoffa.”

For Goldsmith, the 8 years he spent writing this book also led to his own views on unions to shift. “[Hoffa’s] never been given enough credit for what a great labor leader he was, how much he cared about the working man and how consequential he was in bringing so many people from the lower to the middle classes,” Goldsmith says.

“In the course of researching and understanding that, and just basically understanding the history of labor, I did become much more sympathetic to organized labor to labor unions and to the importance of unions in this country, especially at a time where there’s such steep inequality.”

Jimmy Hoffa’s legacy can turn up in decidedly unexpected places. Goldsmith’s wide-ranging book begins with a familial bond and goes on to explore much more — but it rarely loses sight of the interpersonal connections that root its take on life and family.

Plus, deals today on wifi extenders, traveler pants and more