"Spider-Man" co-creator gave the ultimate gift to my daughter...and to me.

Stan Lee pictured signing poster for an exhibit in his Beverly Hills office in 2009. (Photo by Barbara Davidson/Los Angeles Times via Getty Images)
By Ethan Sacks

This is going to be the story of an unlikely hero who accepted the great responsibility that came with great power — and it’s going to be full of melodrama and hyperbole.

Which, of course, is appropriate when paying homage to the late, great Stan Lee.

The comic book luminary, who died Monday, left behind a legacy of savvy showmanship and indefatigable imagination that left a Hulk-sized imprint on all of pop culture.

And in my life.

I don’t claim any special connection to Lee beyond a lifetime of inspiration, about a dozen interviews for the New York Daily News and a number of treasured email exchanges over the past 20 years. Every major comic book writer and artist, Marvel actor and director has more intimate anecdotes than I do. Millions of fans can just as eloquently talk about meeting him, posing for a selfie or finding solace in his work.

That’s because Stan Lee had the mutant power to make every single person, whether fan or industry titan, feel that they were special to him when they passed through his orbit.

Some of it was his patented schtick, to be sure, like a response to an email asking him to get on the phone for a quick interview: “How about Wed. June 7 at 10:00am– Pacific Time, not your time!!!  Lemme know if you can do that and I’ll move Spielberg to another time.”

But that smile when I’d see him at New York Comic-Con was 100 percent genuine. I’ll bet you it was the same one he’d flash Spielberg when the legendary film director did finally get his audience.

When my daughter, Naomi, was born in 2004, I sent Lee a birth announcement, to which he responded:

“Wishing you the most Excelsior-ian congratulations!!!

I hereby dub Naomi Ayla an official Superheroine, forevermore entitled to wear the colors and insignia of the fabled House of Sacks!

So hath it been stated.  So shall it be. 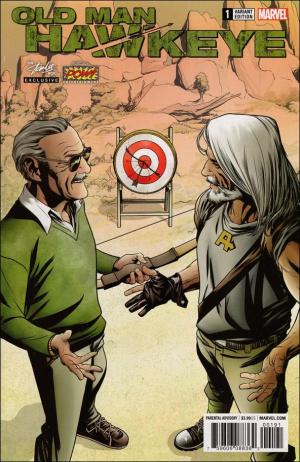 In the past year and a half, my first as a professional comic book writer for Marvel, I’ve gotten to play with the toys he left behind in the sandbox. The titular character in the first major series I wrote, “Old Man Hawkeye,” may be best known to many as the avenging archer played by Jeremy Renner in the Marvel movies, but he’s first and foremost a Lee co-creation (with artist Don Heck).

Cue a flashback sequence, long before I got to visit that cosmos personally.

Lee and “Star Wars” creator George Lucas are the two people next to my parents that probably most shaped my young mind, getting my neurons firing in a certain direction — one that led me first to entertainment journalism, and later to comics. Maybe if I hadn’t discovered “Daredevil” and “The Avengers,” I would have channeled all those hours into becoming a successful lawyer or doctor. (Sorry, mom!)

Getting lost in the pages of the X-Men, the perennial outcasts that he co-created with Kirby, helped this adolescent misfit get through a tough stretch of middle school bullying.

If I close my eyes, I can still hear Lee narrating those episodes of “Spider-Man and His Amazing Friends” in the early ‘80s to my fellow “True Believers.” (Though, unfortunately, I can still hear the Canadian Wolverine speaking inexplicably in an Australian accent in those same childhood memories.)

Now whole new generations, including my daughter, got to know Lee through his ubiquitous cameos in Marvel, Fox and Sony super hero movies. Uncle Stan always squeezed as much of an ovation in a darkened theater as those beefy A-listers who hogged the top of the marquee. And he told me he never got jaded at the sight Spider-Man or one of his costumed peers battling evil-doers on the big screen.

“When we were doing those comic strips, I just hoped that the books would sell so I could keep my job and pay the rent,” Lee told me for The News ahead of the release of 2012’s “Avengers.”

“To think that someday that newspapermen would interview me about these heroes, and there would be big features on the screen, it never could’ve occurred to me in a million years.”

Though comic historians still debate over whether Lee had as much of a hand as Kirby, Steve Ditko and other artists did in the creative process and whether he hogged a disproportionate share of the spotlight away from them, the writer’s thumbprints are still all over the panels of comic books today.

Superheroes are no longer preferred to be powerful paragons of perfection  after the emergence of the iconic Marvel champions. (They were basically super men and wonder women when superhero comics first emerged in the Golden Age.) What made Spider-Man so resonant with teen readers is that Peter Parker, with his awkwardness around high school girls and money troubles, seemed so much like them.

And I try to channel that every time I sit down in front of a keyboard to start typing a comic script.

“Hey, it must be after 1:00am in NY.  Go to sleep,” Lee wrote back to me at the end of an email exchange in 2006. “I need you to remain healthy and spry so you can keep the Stan Lee torch burning brightly throughout the media!”

Keeping that torch burning is exactly what I plan on doing.