50 years and 30 albums in, Buffett is still winning over new Parrotheads 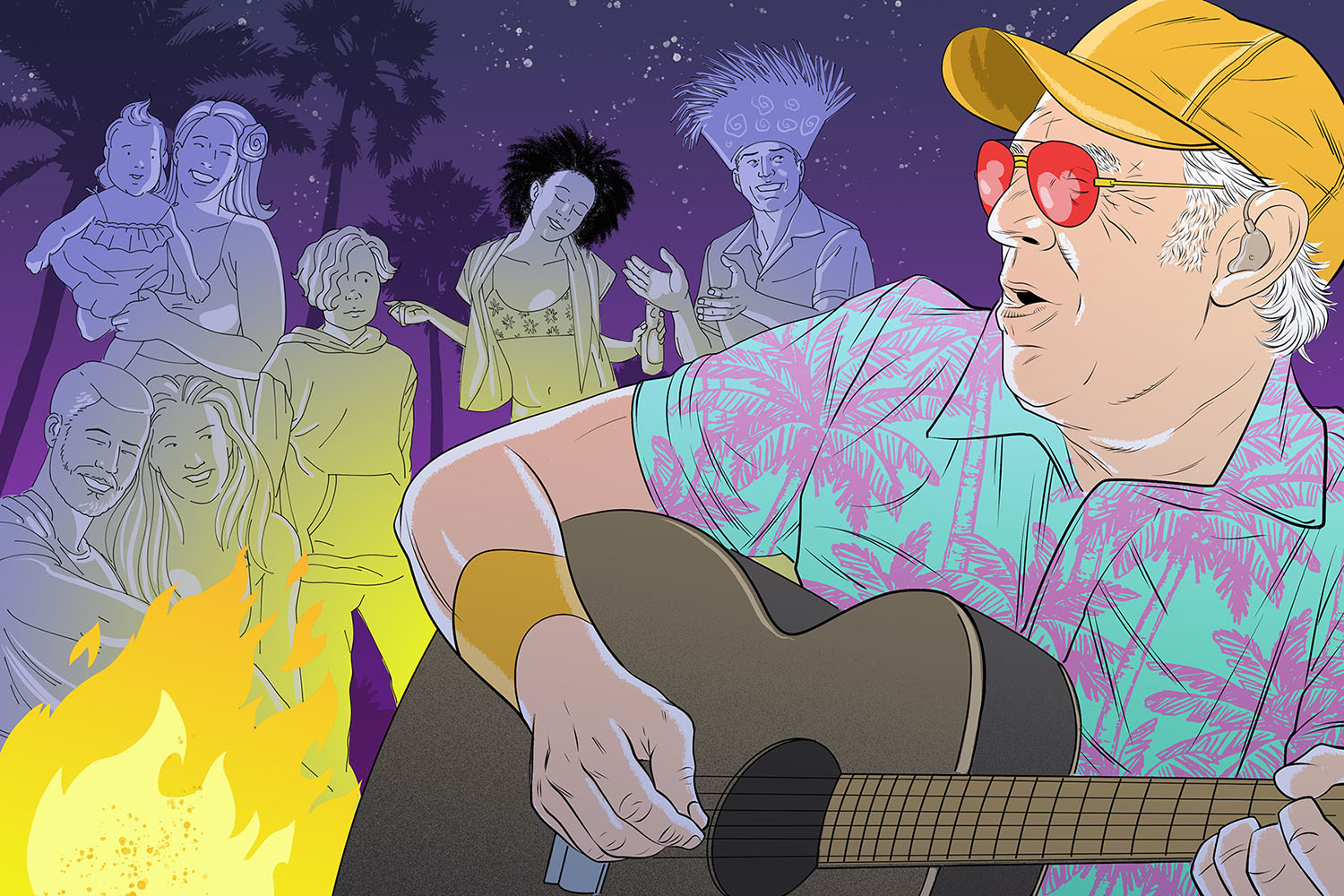 Jimmy Buffett was the first musician I was ever aware of as a child. The second was Britney Spears, but while I recognized Britney as a celebrity, a public figure of mass appeal, Jimmy Buffett had held such an inescapable presence in my life from birth that he felt more like some kind of omnipresent entity with whom I was personally connected, like my parents or God or Santa Claus.

Spawn of Parrotheads who spent the ’80s tailgating at Buffett concerts where they built their very own “coconut telegraph” and hosed each other with beer-filled parrot-shaped squirt guns, I was born into Jimmy Buffett fandom. This is true of many of Buffett’s millennial and Gen Z fans — and yes, he has them.

While the septuagenarian — who released his 30th studio album last month at the age of 73 — may be the boomer Taffy Brodesser-Akner has credited with embodying a laid-back counterpart to the Yuppie generation, his popularity continues to prove generationally transcendent. Baby Buffett fans — called “Keets,” like parakeets — may often be “grandfathered into” the fandom by their Parrothead parents, as one college-aged Buffett stan told Leah Prinzivalli for Vice back in 2017, but there’s more to the Buffett fanbase than boomer dads in Hawaiian shirts.

“The biggest misconception of the brand is that it is just for older people from like 50 and up who are entering the next chapter in life,” says Christian, a 23-year-old Buffett fan who says he’s been “a full blown Parrothead” since 18. Indeed, while businessman Buffett’s Margaritaville empire includes a chain of retirement communities built to nurture aging Parrotheads through that next chapter, it also features a campus ambassador program for co-ed Keets ready to spread their wings at Margaritaville University.

“Margaritaville speaks to every age, every background, every gender,” says Christian, a Margaritaville U alum who became an ambassador for the program in 2017. “It’s an inclusive brand of relaxation and positive vibes.”

Zach, a 19-year-old MargU ambassador at the University of Michigan who says he was “introduced to Jimmy Buffett in the womb,” echoes those sentiments, waxing a bit poetic about Buffett’s capacity to unite fans of all kinds.

“Part of my love and fascination with Buffett is that people of completely different age ranges, colors, creeds and backgrounds feel a very unique yet similar feeling when they hear his music,” he tells InsideHook. “I think the Buffett fandom is a beautiful representation of the human race. We’re similar in far more ways than we are different,” he adds.

Buffett may not be the panacea for an increasingly fractured society his most earnest fans are inclined to hail him as, but he does seem to have a unique ability to unite rather than divide. After all, his young fans are mostly Parrothead offspring who have embraced their parents’ music taste, rather than fulfilling their generational obligation to rebel against it. Some of them are already preparing to pass the tiki torch to the next generation of Keets. “I think we pick up the mantle from our folks,” says Zach. “We all fall in love with the traditions of those before us and will hopefully pass them down.”

That said, Buffett’s youngest fans aren’t all wide-eyed disciples of the Margaritaville creed. As Kat Chinetti, a 22-year-old Buffett fan and host of the podcast We Should Do This Again Sometime, points out, even the most ardent young Buffett lovers tend to approach their fandom with a level of generationally on-brand irony.

“I feel like many of the younger folks I know enjoy Buffet a bit more ironically — for lack of a better word — than their parents,” she tells InsideHook. “There’s a big sense of humor, or at least distance, that I’ve found exists more in younger fans than older fans.”

It’s a sense of humor the brand itself seems to share with this latest generation of Buffett-loving cynics. Chinetti points to a certain self-awareness inherent in Buffett music and the surrounding Margaritaville culture that tends to keep everyone laughing with Buffett, rather than rolling their eyes at the beach bum-turned-multi-millionaire entrepreneur.

“The ‘warm-weather-beach-day’ aesthetic and kitsch has enough self-awareness in it that even if you don’t like Buffett, you can’t help but chuckle at it,” says Chinetti. “It’s over-the-top and chintzy, but that’s part of the charm.”

Jimmy Buffett’s music — a still largely unparalleled fixture in the “Gulf & Western” genre it singlehandedly forged — has always been inherently escapist, and that daydream of living life on island time hasn’t faded in the half-century since Buffett first started crooning about getting drunk on beaches, boats and bars in paradise.

“He sells escapism,” says Brooke Benson, a freelance actor, writer and Margaritaville U alum. “The music is a tool for that escapism, but he’s created so many other tools to provide that,” she adds. “You can reel people into loving the Margaritaville state of mind without having to change up their playlist.”

That promise of escapism is still a big part of what draws new fans into the Buffett lifestyle today, as any young fan will tell you. “To me, Buffett music is almost always linked with a cold drink, a beach, and a bright sun,” says Zach. “It transports me to that place.”

“It’s just good vibes music,” says Christian. “It’s the music you want to play as you cruise through town with the windows down on a nice summer day. It’s escapism. Simple as that.”

But if Jimmy Buffett’s music is escapist, it is also intensely aware of what its listeners are trying to escape from. Somewhere underneath all the kitsch and branding, the lighthearted tunes and breezy melodies, there is a desperate, heartbreakingly human sense of longing in Buffett’s music —one its fans seem to share.

Zach paints Buffett fans as idealistic dreamers “longing for a life of happiness and relaxation.” The Buffett lifestyle, it seems, is actually more about the pursuit of that lifestyle, “of living and chasing something so much more attractive than the vanilla reality we find ourselves in,” Zach adds.

Chinetti, too, has picked up on an interesting disconnect between the “casual, party-like atmosphere” of the greater Buffett culture and the “sadness and pain wrapped in the carefree lyrics.”

Any seasoned Buffett listener knows the artist has always loved a contemplative ballad, but even some of his best-known poolside anthems carry a tune of existential distress — if one is inclined to hear it.

“There’s sadness under that candy shell,” says Chinetti. “I find that contrast fascinating. There is a family-friendly restaurant chain named after a song that ends with ‘some people claim that there’s a woman to blame, but I know it’s my own damn fault,’ which is kind of existentially horrible. I love it.”

Even beyond the suggestions of alcoholism, delusion, denial and apathy that easily veil themselves in lyrics of gleeful partying and carefree relaxation, there is an even greater, more universal force of existential darkness at the heart of the Jimmy Buffett ethos: mortality.

The specter of death looms large over much of Buffett’s mammoth discography. The subjects of his songs — who we are often, though not always, encouraged to read as Buffett himself — know they are living, as we all are, on borrowed time. They go to Paris seeking answers to life’s greatest existential quandaries only to watch the summers and winters “scatter like splinters” while 45 years vanish before their eyes. They watch helplessly as the days fade away “and finally disappear,” knowing that they, too, are destined for the same fate. They are poets who lived before their time and die in obscurity. They are “over-40 victims of fate” who get drunk and stay drunk for over two weeks as the threat of middle age looms on the horizon.

But Buffett’s near-constant awareness of death does not seem to be marked by fear or despair. After all, as he told us himself more than four decades ago in a seemingly breezy ballad, “When I do fall, I will be glad to go.”

At the heart of the Jimmy Buffet lifestyle, beneath all the parrot feathers and good vibes, is a conscious, willful optimism in the face of inevitable, if eventual, demise. No sooner has Buffett contemplated his own mortality while watching the day disappear from that one particular harbor than a jaunty beat kicks in and he decides to instead “think about the good times down in the Caribbean sunshine.”

“Now don’t get me wrong, this is not a sad song,” he tells us in “Growing Older But Not Up,” his Peter Pan-esque tribute to willful immaturity. Knowing that he, too, will eventually disappear, he has simply decided to “let those winds of time blow over my head,” taking it, he tells us, “right to the end.”

The mortality in Buffett’s lyrics is what makes them immortal. Buffett fans today make the same promise their predecessors did decades ago — that they’d rather die while they’re living than live while they’re dead. To live the Jimmy Buffett lifestyle is to never stop searching for that elusive shaker of salt, to get drunk and screw while you can, because every margarita, every cheeseburger in paradise, could be your last.