Which one of your daughters is this?

As anyone who has a mother, sister or daughter should know by now, women are just as competent, if not better, at doing everything short of peeing standing up. But just because they can do all the stupid things men have been doing since forever doesn’t mean they should — especially if they’re nine.

Don’t tell that to the dad of Evnika Sadvakasova, a pint-sized Russian boxing prodigy who’s been trained with a handheld device and exercise set called the “Best Hook” method. Thanks to her training, Evnika can kick the crap out of trees (see above) and doors (see below).

According to the caption that accompanied the door video on Instagram, “after we allowed Evinka to destroy everything in her room, and make a hole with her bare hands in the door, her performance in school improved” because she was feeling “more than free.”

While that might be true, we can’t help but think it might be prudent to at least hold off on letting Evnika destroy inanimate objects with her fists until she’s a moody teenager (when she will inevitably do it anyway). 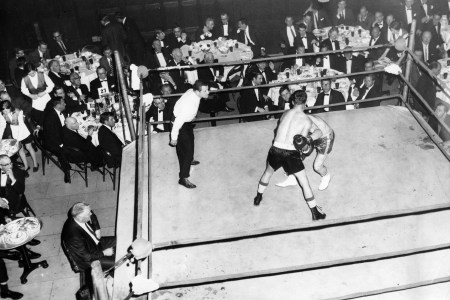