While Kathy Griffin’s fake-Trump-beheading received a black eye, a re-staging of a classic Shakespeare play—complete with its own explicit assassination of a very Trump-like Julius Caesar — is shaping up as one of this year’s most intelligent and thought-provoking theatrical productions.

New York’s Public Theater Company is presenting Shakespeare’s Julius Caesar at Central Park’s Delacorte Theater from May 23 to June 18, as part of its regular summer “Shakespeare in the Park” series. The play is directed by the Public’s own artistic director, Oskar Eustis.

“I can say without embarrassment that I decided to open our summer season with Julius Caesar on November 9, 2016,” Eustis told Playbill. “At this particular historical moment, it feels extremely fruitful to look at that historical moment from 2,000 years ago and to try to understand ourselves through that lens.” 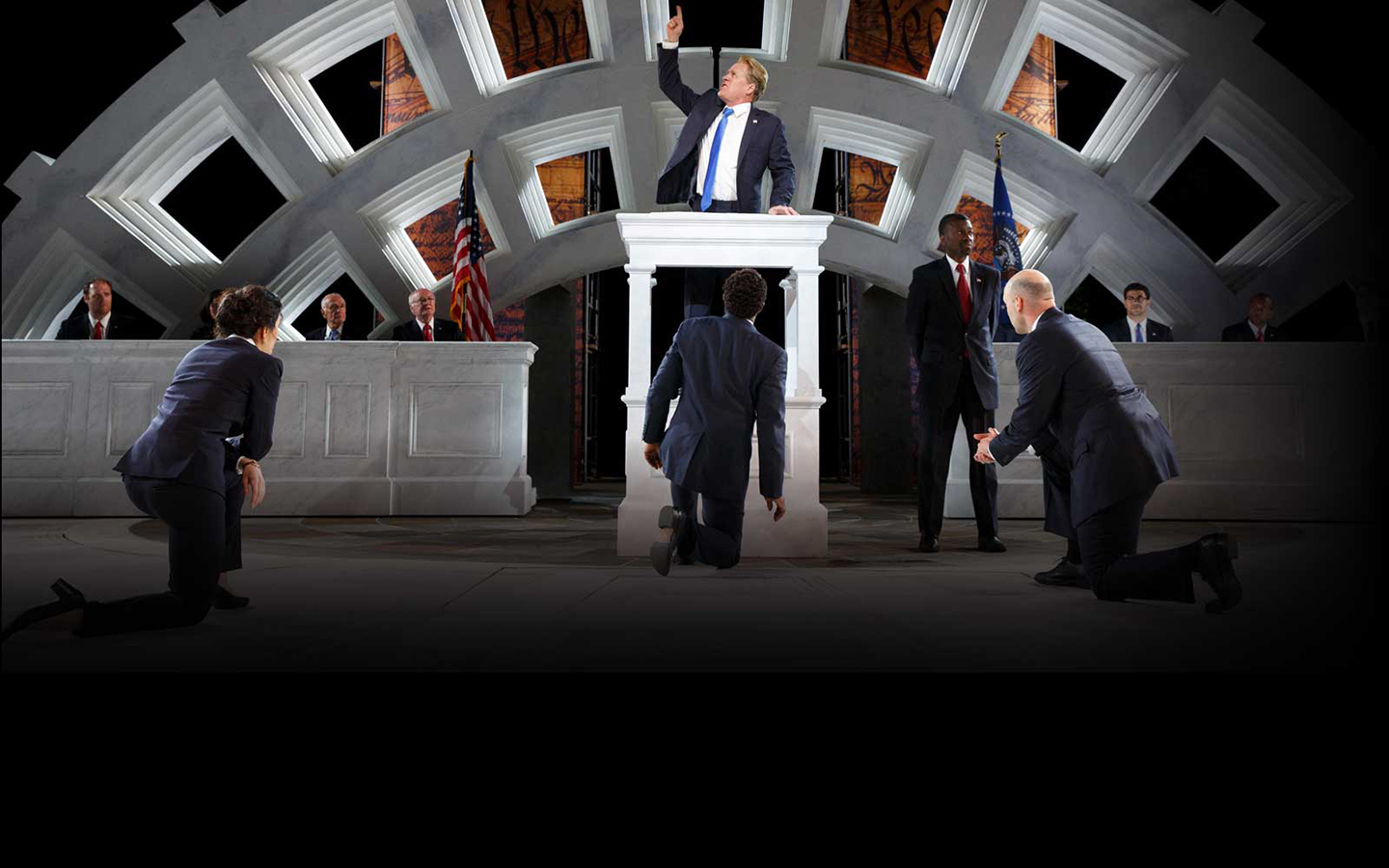 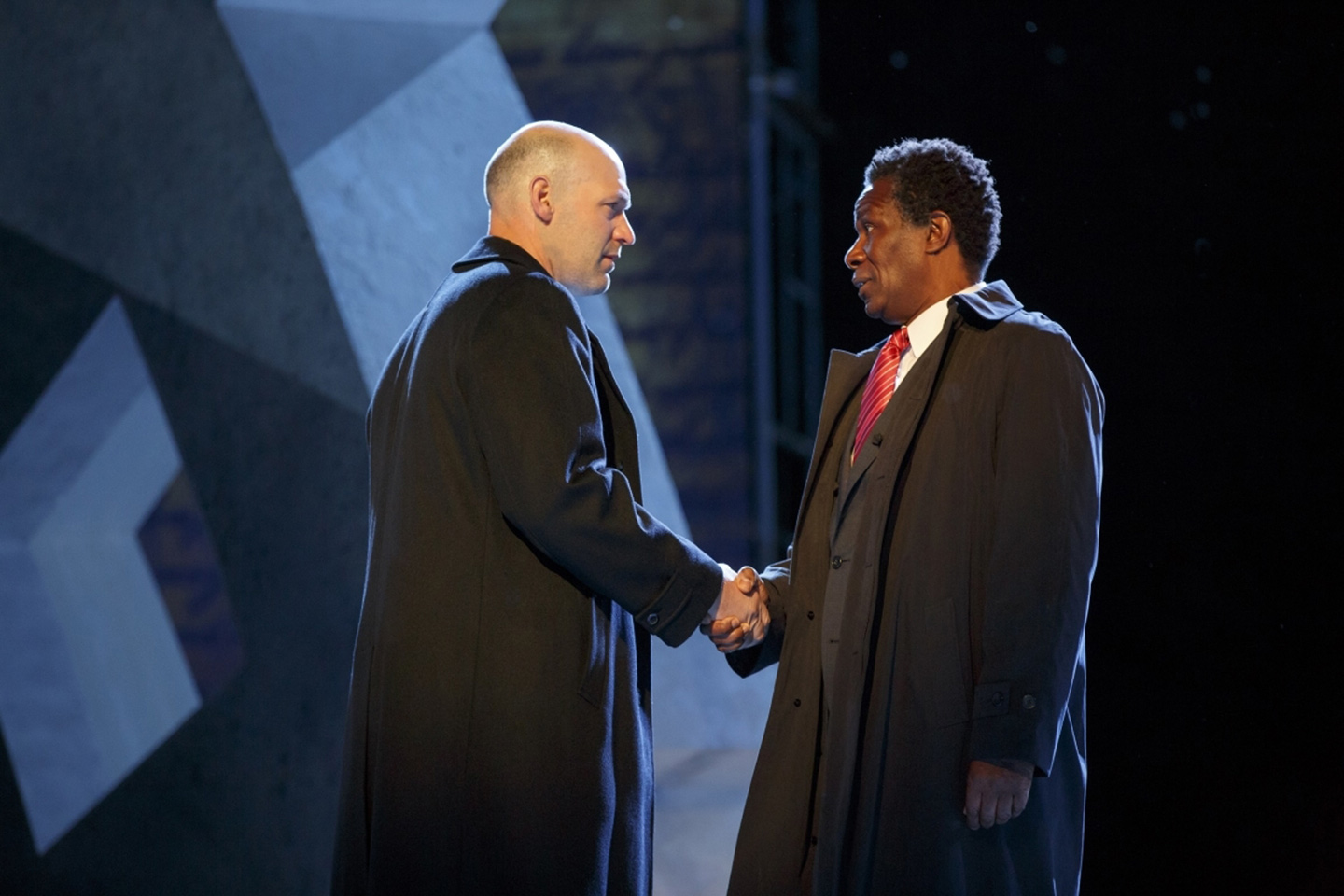 In 1988, the Public produced the same play with Al Pacino and Martin Sheen in Roman togas. In 2000, another production from the Public featured David McCallum in a cape and sword.

This time around, Gregg Henry (from ABC’s TV drama Scandal) plays Caesar in a Trumpian navy overcoat, navy suit, white shirt, and extra-long, blue power tie, and with all the President’s mannerisims.

Tina Benko plays Caesar’s wife, Calpurnia, in Melania-style heels and designer dress, complete with an eastern European accent, and a noticeable swat away of her husband’s hand.

In this production, when Calpurnia seeks to persuade Caesar to stay home from the Senate on the Ides of March, she does so by hiking up her gown and climbing, half dressed, into the bathtub where Trump/Caesar bathes. And when the conspirators come to fetch him, a still-naked Trump exits the tub, full backside to the audience, and waits for a white robe to be wrapped around him.

Corey Stoll (of House of Cards) plays Brutus, and Elizabeth Marvel (of Homeland and House of Cards) plays Marc Anthony, dressed first in a track suit and later in full battle gear. Brutus’ wife Portia (Nikki M. James), Cassius (John Douglas Thompson) and all the other conspirators are African Americans.

Twenty five or so audience members rise up to play the mob. The climatic battle at Philippi has become a contest between black-suited, helmet-wearing, shield-yielding riot police pushing back “Resistance” protestors. 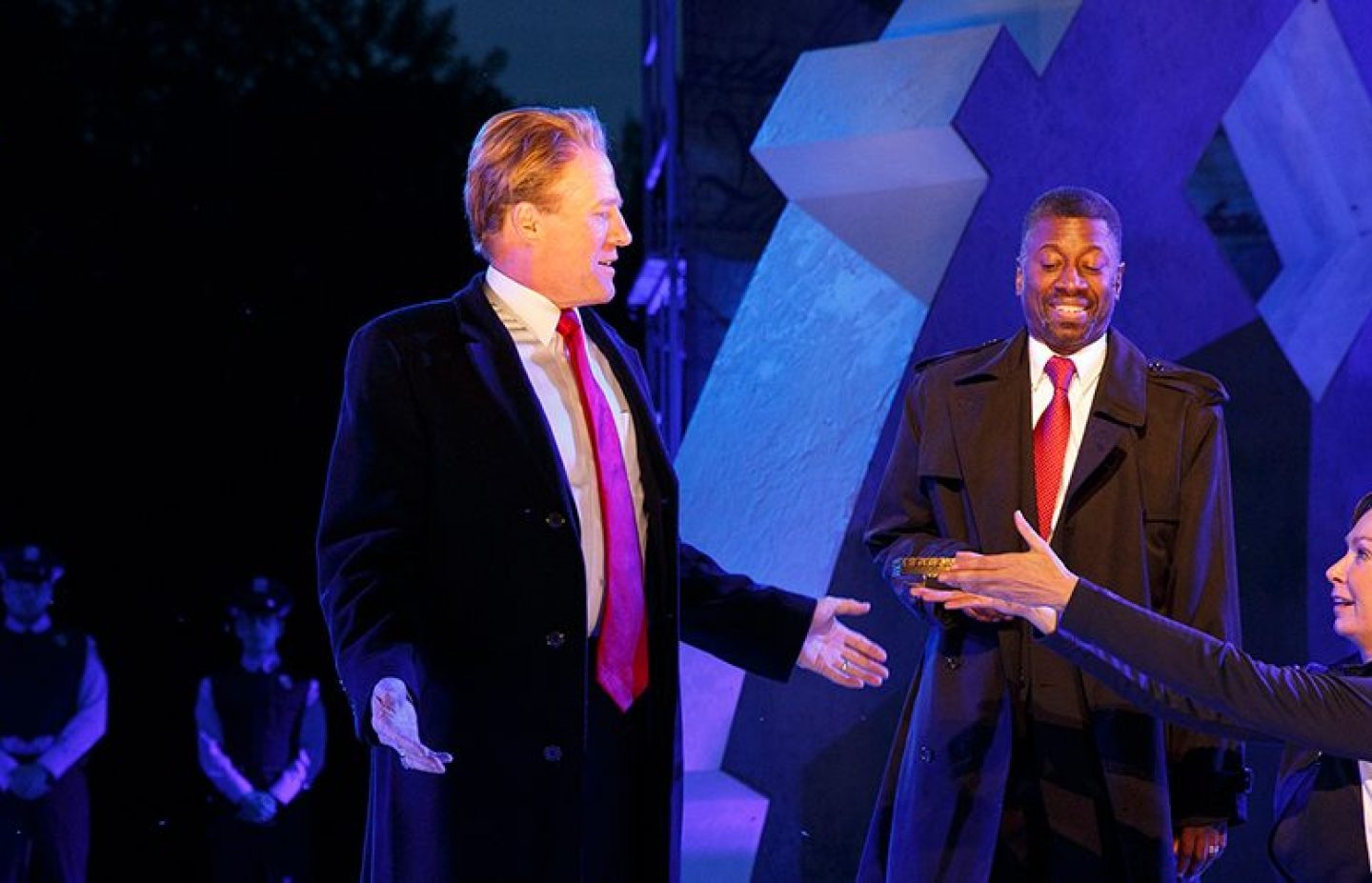 The assassination itself is done classically and explicitly. Trump/Caesar is pulled down from his speaker’s platform on the Senate floor and knifed by each conspirator with their traditional double-edged dagger. The conspirators later bathe their hands in his blood. The corpse is laid out on stage on a bier, dressed in boxer shorts, and all wounds exposed. When the civil war does come, Octavian is a rich young preppy in khakis, a navy sportcoat, and a duck hunter’s vest.

At the end of the day, the play leaves much of the moral ambiguity that Shakespeare himself left. 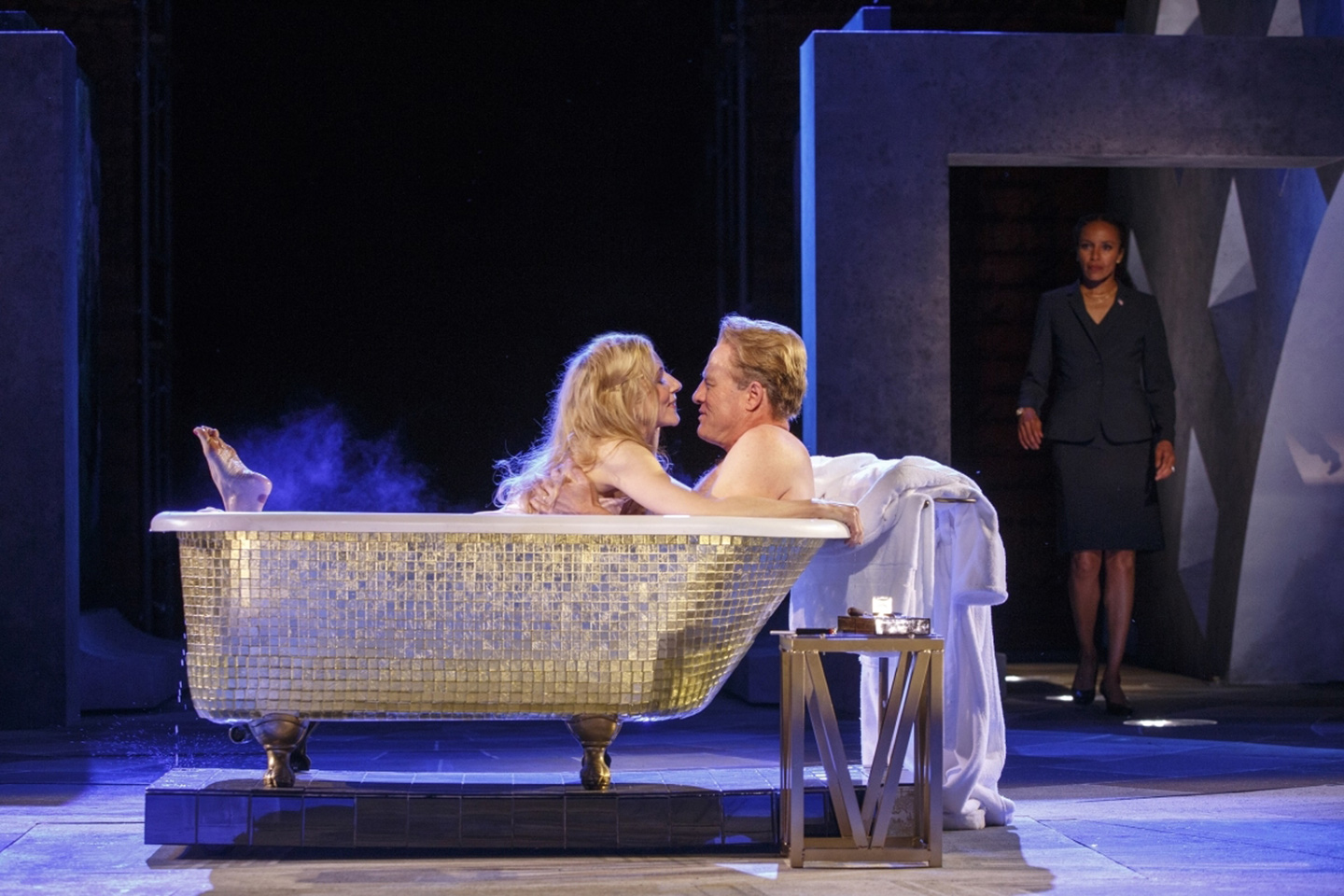 On one hand, Brutus is labeled “the noblest Roman of them all,” acting from pure public motives to preserve the Republic.

On the other hand, he failed utterly – murdering a man who had not yet claimed any kingship; expecting public support for his position, which did not come; triggering a terrible civil war, and then losing that war completely, so that Rome ended up in the hands of actual emperors and tyrants for centuries to come.

Those who favor resistance might draw from the play’s advice that Brutus failed by being nice: allowing Marc Anthony to live. 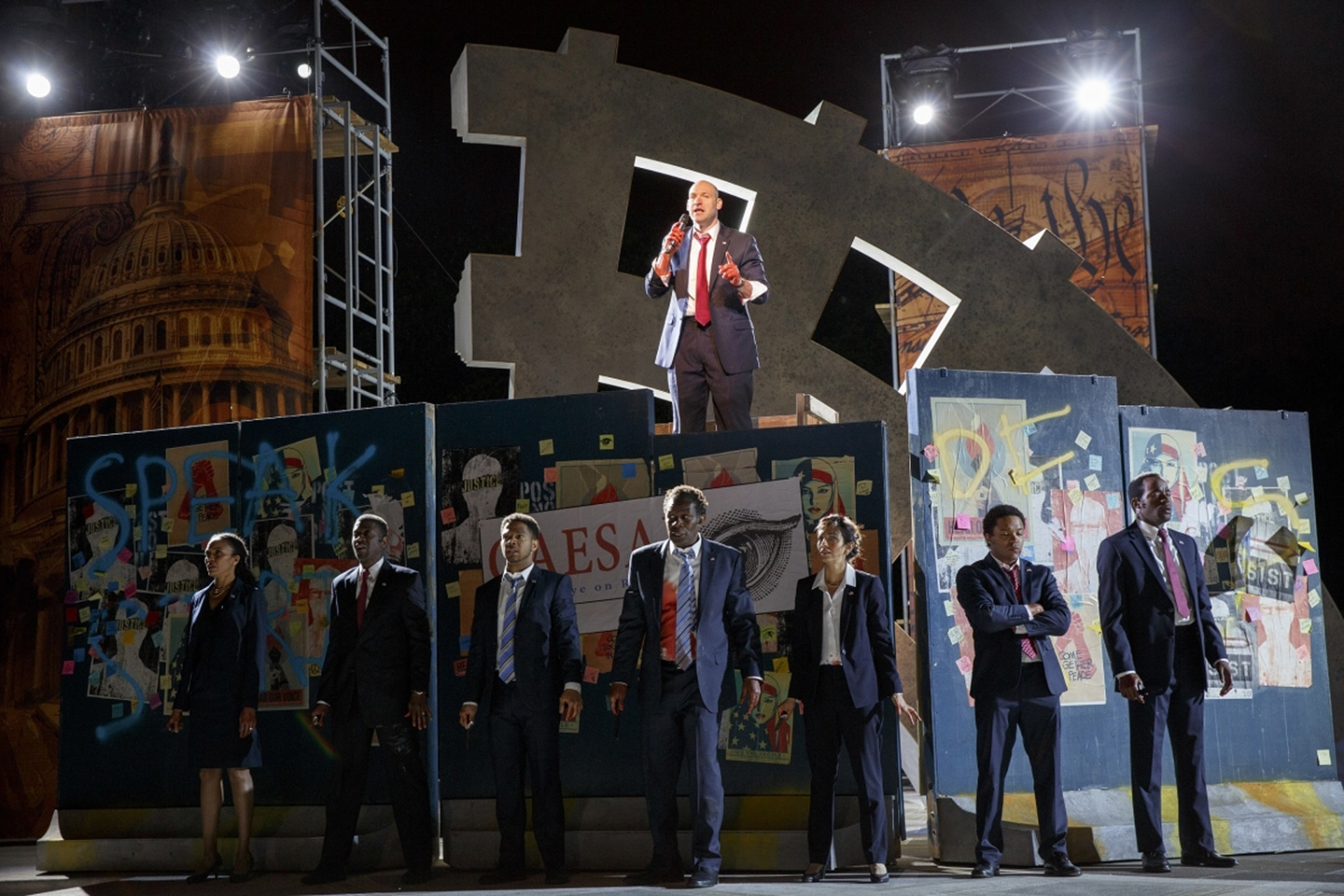 Those who oppose the resistance might turn instead to Dante’s “Inferno,” where Dante places Brutus and Cassius alongside Judas in the ninth circle of Hell (the circle for traitors), and where each is stuffed and eaten for all eternity in the three mouths of Lucifer. 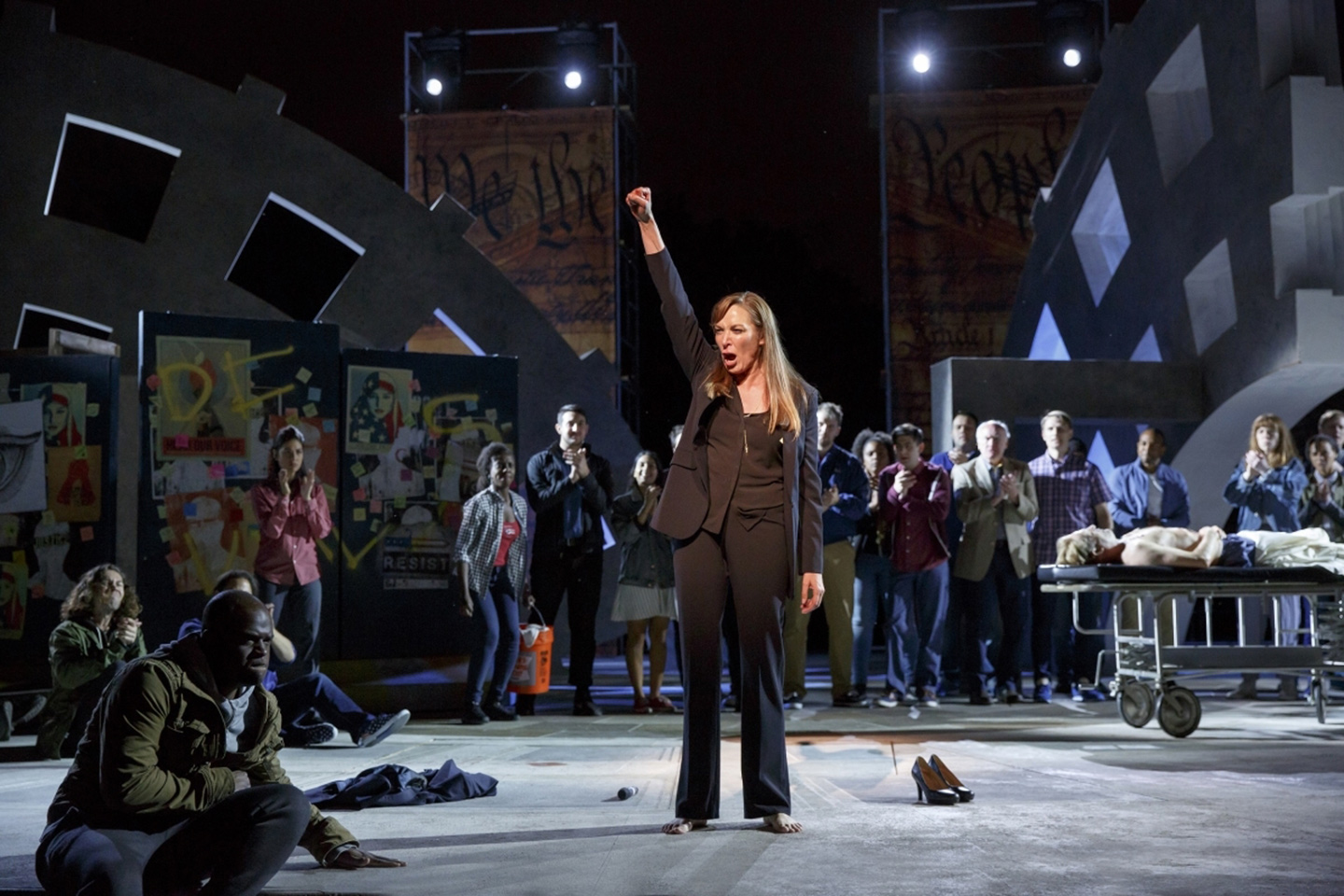 But jaded New York theater lovers on both sides of the aisle will likely come out to praise this Caesar, not bury it. 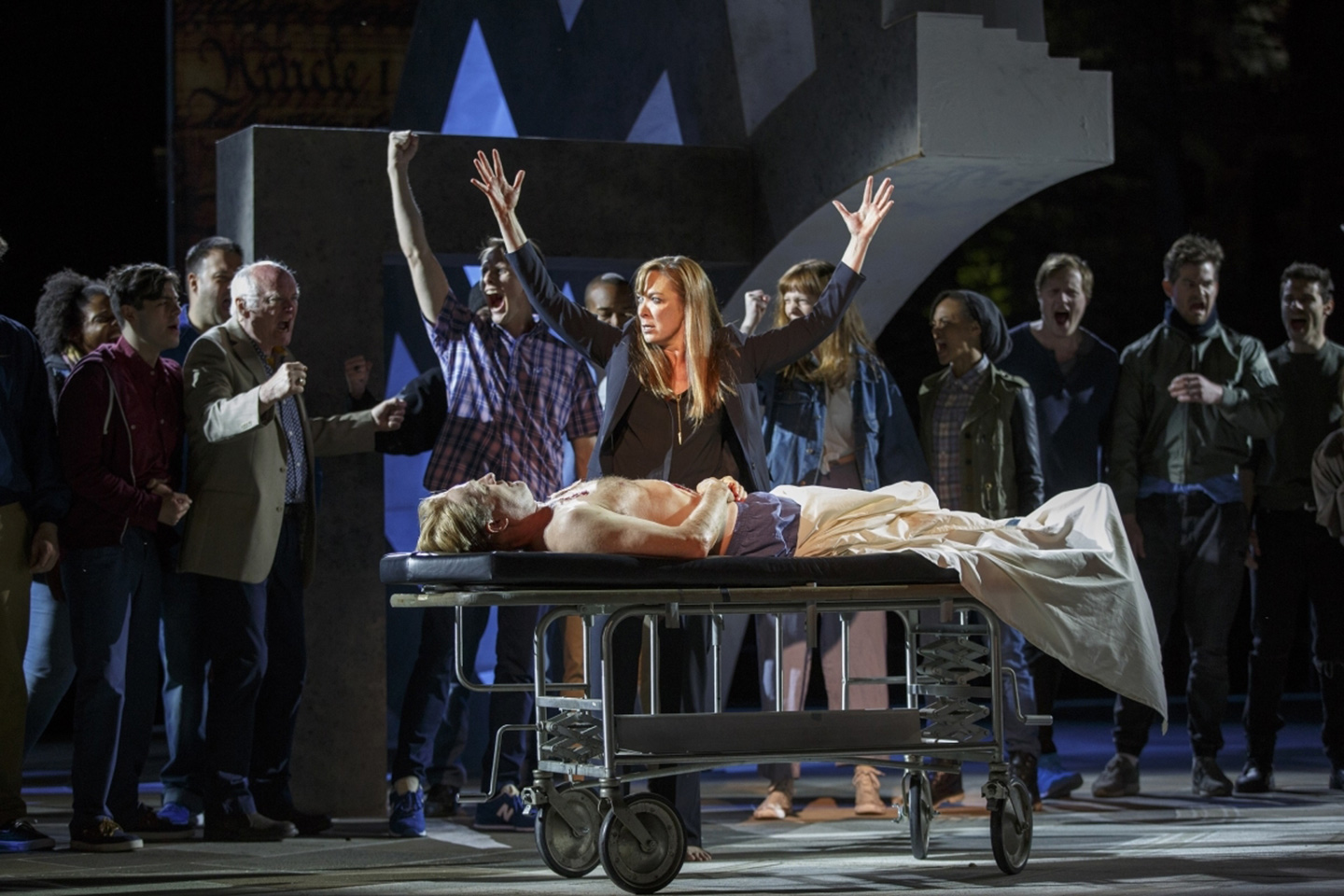 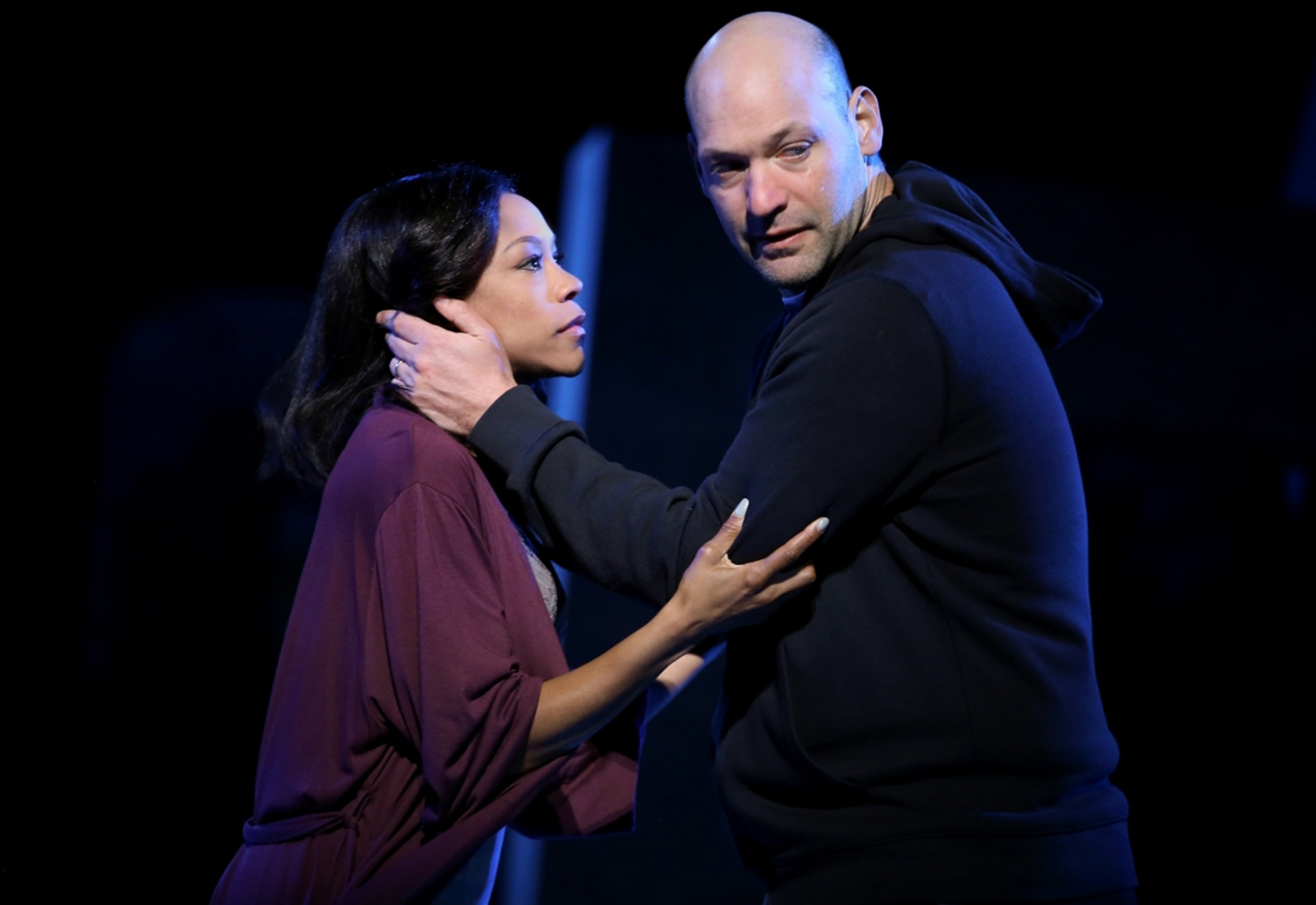