“Little Joe” Isn’t a Sci-Fi, Thriller or Horror. So What Is It? 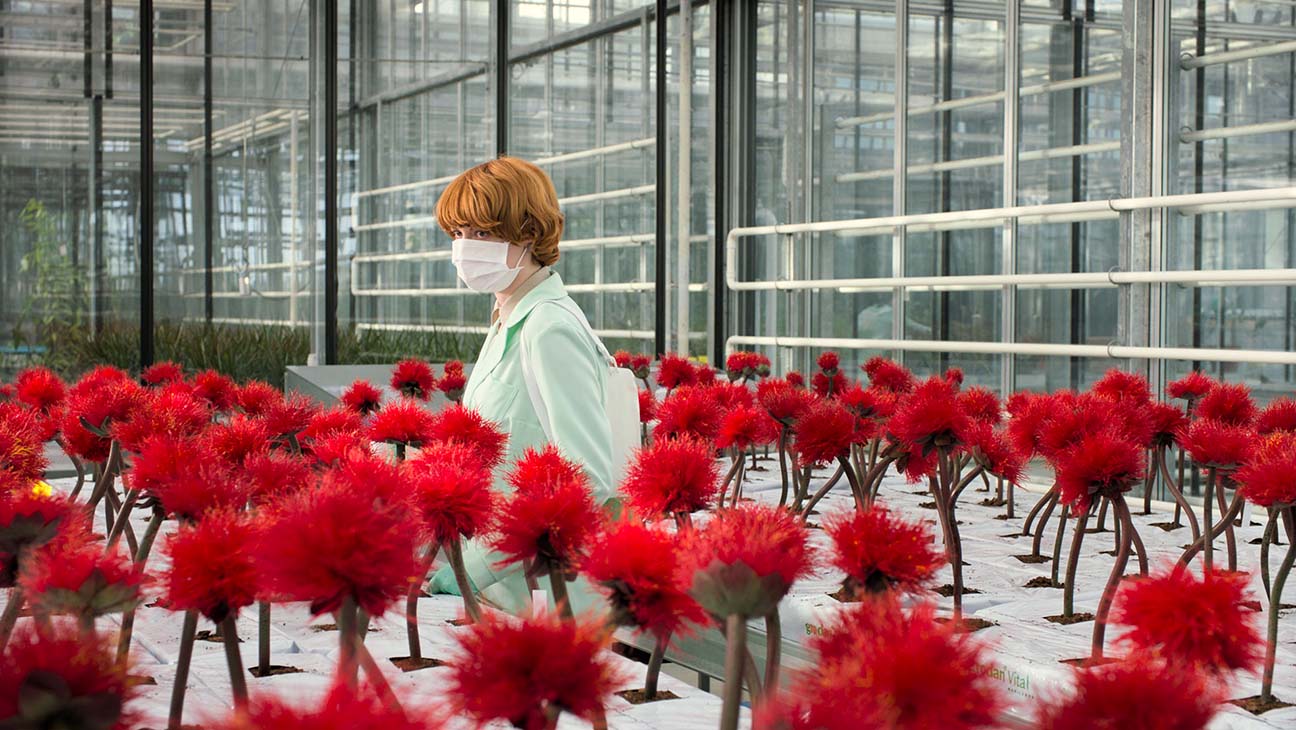 Horror films work their black magic by gradually revealing that an ordinary situation — a stay at a motel, a pregnancy, a visit to meet the in-laws — belies nightmarish, life-and-death danger. Jessica Hausner’s latest film, Little Joe, does the diametric opposite, following along as scientist Alice (Emily Beecham, who claimed the Cannes Film Festival’s Best Actress prize) realizes that what she had initially perceived as creeping menace may actually be more harmless than she presumed. Sitting down with the Austrian auteur and her star last month on the occasion of Lincoln Center’s retrospective of the full Hausner filmography, I float the idea that Little Joe could be fairly termed “anti-horror.” She’s quick to correct.

“I think if you would want to name a genre,” she tells InsideHook, “it’s closer to sci-fi, somewhere between sci-fi and psycho-thriller. But I prefer for it to be thought of not through genre, but as an auteur film … It tries to escape genre.” It’s not sci-fi, it’s not a thriller, and even if we might think about it in inverse terms, it’s not horror, either: it’s a Jessica Hausner movie, a class of art unto itself, and it’s the trickiest entry yet in a canon that defies easy interpretation. Her films tend to suggest a certain reading and then turn right around to undermine it, and that process feels both more stark and slippery than ever with her first feature in the English language. It looks and moves like a horror film, employing a cinematic language even the most casual American moviegoer can understand, but then it mutates into an entirely new creature identifiable only by Hausner’s creative signature.

Related:
How the World up to Korean Cinema With “Parasite”
The Nightingale Is a Traumatic but Necessary Film

“Each of my films is located in a closed-off world: a company, a hotel, a resort, a school. I wanted to find a setting like that, and show very precisely the hierarchy of the society in that special place, often visualized by the uniforms people wear.” For Little Joe, that self-contained space is a bioengineering greenhouse facility, where Alice and her associates have been hard at work on a horticultural wonder to take the world by storm. Clad in mint-green lab coats personally selected by Hausner’s costume designer and sister, Tanja, they prepare to unveil a plant that releases a potent pheromone making those who inhale it experience a sensation of deep contentment. “Love it, and it loves you back,” goes the botanical elevator pitch.

Before long, Alice starts to get the sense that something sinister is afoot. Everyone who comes into contact with the plant, from the colleague (Ben Whishaw) who has trouble taking her “no” for an answer on an awkward date, to the son (Kit Connor) who she struggles to relate to over nightly take-out, grows increasingly preoccupied with its maintenance and preservation. She gets a strain of the heebie-jeebies hailing from somewhere between Little Shop of Horrors and Invasion of the Body Snatchers, but she can’t be completely certain about whether it’s all in her head.

“This was an ongoing discussion between Jessica and I,” Beecham says, with a fond look at her director. “Alice’s mental journey is up and down, not linear. It doesn’t quite build to a climax, like a regular role. She moves in something like a scribble pattern, through insecurities and pride.” Beecham adds that Alice’s work-life balance was another topic of constant conversation with Hausner, zeroing in on “who she is and how she sees herself.” It’s a tough notion to pin down, with Alice harboring slight guilt over her tendency to get more fulfillment from her job than parenting. “She’s getting into roles and out of them again,” explains Hausner. “She plays the scientist, she plays the mother, and she’s not sure which is her true self. Instinctively, I had the feeling Emily understood what this is about.”

Ultimately, the fickle concept of a “true self” moves to the fore of the film, as Alice questions the legitimacy of everyone’s possibly brainwashed behavior. Is the happiness that the people around her are feeling fake? Is “fake” happiness meaningfully different from “real” happiness to the happy person? Could she be getting in her own way to better living through organic neurochemistry? These questions nudge the viewer toward an allegorical reading of the film first raised when Alice’s supervisor describes their great success as “the first mood-lifting antidepressant happy-plant.” Critics were divided as to where Hausner stands on the matter at the film’s Cannes premiere, with some arguing that fitting the construct of the happy-plant into a horror schema reinforces the stigma still attached to mood-altering medication.

Hausner would like to clear the air (spoilers, be forewarned): “If this was a pessimistic warning of a film, I think it would’ve been, uh, very different. The film does not see the plant as a simple negative, not at all. It’s a friendly ending, with a happy side, that Alice is finally able to work with her plant the way she wanted. I don’t see it as a negative that the father takes care of their child. This is what it is meant to be, and I was astonished by how some people were still wanting to see a dystopian view in it.”

As she mentions, the film concludes with a sneaky subversion of the last-woman-standing trope, as Alice succumbs to the plant’s ministrations. Except that the scene doesn’t play like the final survivor getting swallowed up by the encroaching horde. Alice lets her son live with her ex-husband for a spell while she devotes herself to her work, something she desired but couldn’t bring herself to ask for. The elements of horror melt away, leaving a rarer and more mature subject for a film: the difficult work of learning to allow yourself to have what you want.

“I like the idea that Alice is finally freeing herself from her anxieties,” Hausner says. “The pharmaceutical pills that are popular now, you can interpret the film as gesturing in this direction, but the main issue about happiness is that we don’t know what it is. What we want to feel, what that feeling looks like, whether we can trust it when it comes to us — these are mysteries we each solve on our own.”

A maddeningly elusive thing, happiness. Hausner and Beecham have spent most of their adult lives grasping for it, or rather, figuring out how to grasp. “It’s a second-by-second thing for me,” Beecham says. “I feel great, then I turn on the news, and suddenly I feel terrible. It’s all in waves. We can’t control it on our own.” Hausner chimes in: “Happiness is an invisible thing. For example, I have a sad look in my eyes. I always have it! That’s the way I look if I’m happy or not.”

Resting gloom face withstanding, she insists that feelings are fundamentally unknowable to everyone but the individual, and that even that much is pretty tenuous. “The film’s all a game around that idea of happiness, which is what it is — an idea,” she says. “There’s a lot of talk about ‘true emotions,’ and I think all emotions are true. Alice’s supervisor says, ‘How can you judge the genuineness of a feeling?’ You don’t know if someone’s faking, because they don’t either.”

Beecham’s performance accentuates the blurry divide between the fake and the real, dissolving the terms completely. She notes that she pitched her voice up a touch during the scenes in which she’s speaking to her son — “a form of being artificial, but an artificiality I find natural,” as she puts it.  “Alice, as a mother, she’s inhabiting a role. She wants to be a good mother, so she does what she thinks a good mother does … We manipulate ourselves to fill the roles we assign ourselves. What is natural, anyway? In this context, I hardly know what the word means.”

From the template of horror, Hausner and Beecham jointly broke out into a more complicated framework that could engage with more complicated inquests. The unease that they seed does not belong to the hair-raising register of scary movies, even if she borrows their grammar, but rather the confrontation of a difficult realization. We get in our own way, we resist help out of suspicion and fear, we convince ourselves that happiness must be a trick. Hausner’s film gives the impression of some sense of clarity on the matter by the time the credits roll, as the final note sees Alice give herself permission to accept the life she deserves.

But the filmmaker is as human as any one of us. Her edge is that she knows precisely how much she doesn’t know. Joy is an enigma, and so however one chooses to pursue it, that’s between them and their god. Or, in her case, her iPhone.

“This idea of happiness is not something that can be simply expressed,” she sighs. “We are probably fairly happy people, you and me and Emily, because we’re all in professions that we chose. Other people do shitty jobs for the money, so we’re already on the side of the fulfilled. And still, it is challenging to be happy. I don’t wake up every morning and sing out of the window that I am a filmmaker living my dream. Happiness is just a word. It’s the picture on my phone background, a landscape — that brings me happiness. But then, when I take a close look at my life, I can only ask, where is this happiness?”