Inside King Kong, the Massive 2,000lb Gorilla Roaring Across Broadway

We caught up with the team who makes the new musical's 20-foot-tall leading man come alive. 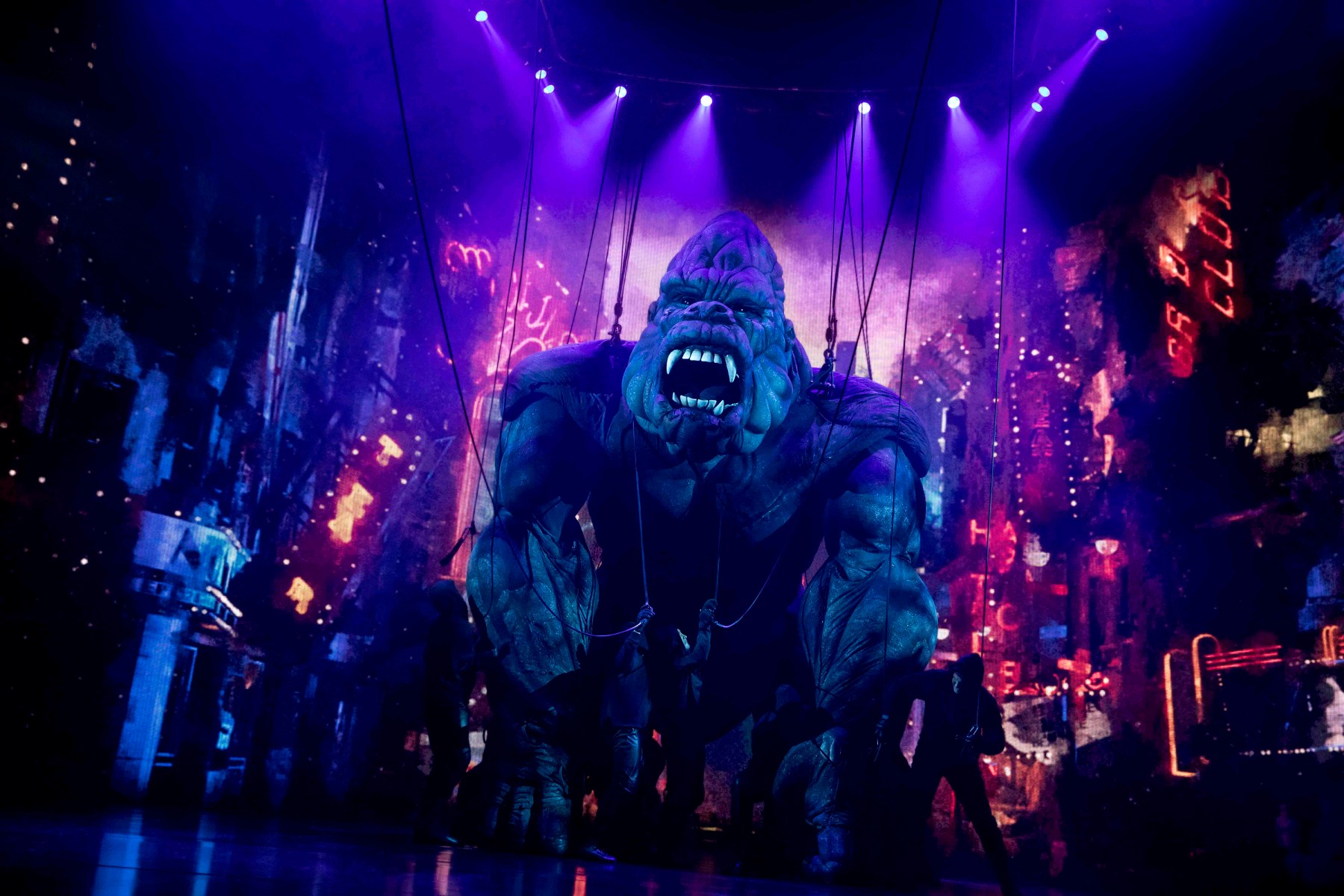 There’s a wild animal inside New York’s Broadway Theatre. Eight times a week, a 2,000-pound ape is brought to life, its arms and legs stretched, its vocal cords practically shredded. It sniffs and snarls and unleashes earsplitting roars in front of an audience of 1700, and, especially in low light, it’s easy to forget that King Kong is not alive. He is, in fact, an expertly crafted puppet controlled by no fewer than 14 people.

The $35 million rendition of the 1933 classic film, “King Kong,” officially opens on Thursday, November 8. In advance of the premiere, RealClearLife caught up with the show as well as Jacob Williams, Jon Hoche and Danny Miller, the “voodoo operators” behind various elements of the massive man-made gorilla. We wanted to know what goes into animating a 20-foot-tall puppet — and giving it a sonic boom of a voice. 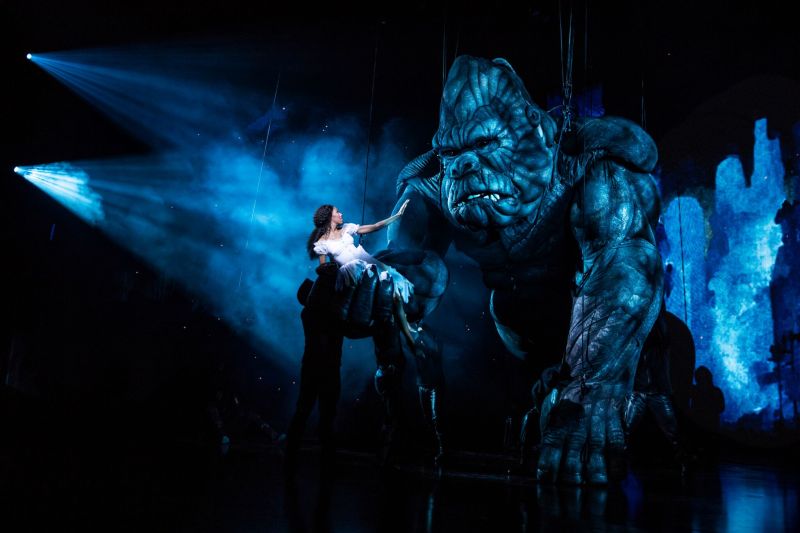 RealClearLife: How is Kong brought to life?

DM: It bamboozles quite a few people to know and try to understand how it all works, because it’s so technical. It takes 14 of us.

Ten people on the stage that we call the King’s Company, they are the ones who are actually physically moving him around. They’re directly maneuvering him, they can feel him, they’re puppeteering him onstage. There’s three of us called voodoo puppeteers, and we are taking control of all the animatronics. There’s Jacob, who’s our Kong captain, and he’s communicating with everybody on stage, and us as well. He’s calling the shots. He’ll be directing Kong, where he’s moving, counting in movements that he’s doing, “right arm go,” or something like that. He also controls the shoulders and the wrists and the hands, they have some air compressors in them, so he engages all of that.

There’s Jon who stands next to me and he’s the voice, he’s got a microphone that he’s actually roaring into, and then it gets modulated into that system. It’s all live.

I’m on the end directly in sync with Jon. There’s a one second delay [and] I’m reacting to everything that he’s doing. There’s 16 different motors in his face to create all that emotion you see — individual eyebrows, the blinks that you see, the sniffs, the lip snarls — they’re all individually controlled. As soon as he roars, I’m opening the jaw with a foot pedal. There’s a lot of expressions on his face, and it’s not like I do just one movement of each movement. Everything has to sort of flow into each other. So it might be raising an eyebrow and a lip at the same time.

The 14th person is a guy who is actually moving Kong around the stage. There’s actually a marionette, strings on cables. So the fourteenth guy, that’s Stefan, he’s moving him around, so he comes on in a x-y axis at the top. 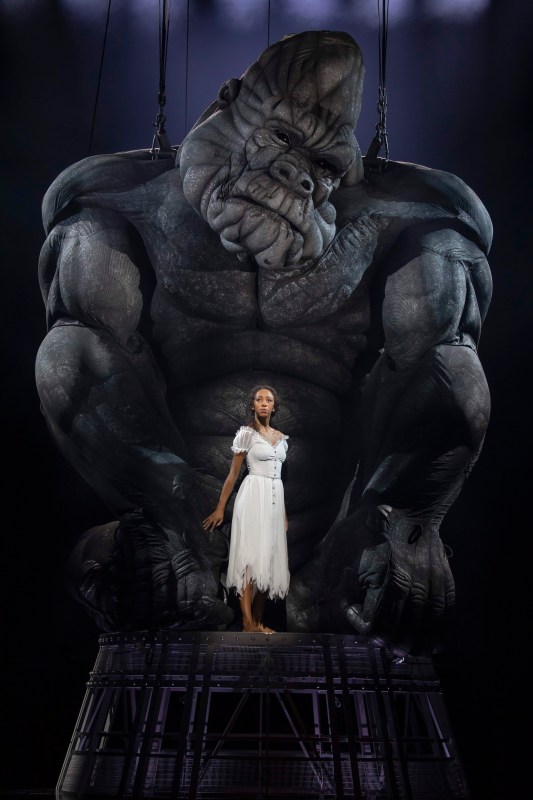 RCL: Kong is extremely heavy, and there are times he’s physically carrying Ann. Is it safe?

DM: There are a lot of people that are looking out for those sorts of things, the safety is the first and foremost important thing about something that weighs 2000 pounds and is 20 feet tall. He is very much — he could be a liability, for sure. So lots of safety precautions go into that, we have riggers and everything’s checked and doublechecked, and the cables that he’s on are extremely strong and could obviously withstand things probably 4 or 5 times his weight.

Because he’s live, everything needs to be well choreographed, down to the finest detail because we do have the big guys, but we have girls as well controlling the puppet. The people that are on the legs and the arms and pulling on the ropes, every movement is very well rehearsed and so, when Ann’s in the hand, she’s clipped into the hand as well. She’s got a harness on, so if anything did drop, she’s actually connected. The big guys are actually holding the hands, so they’re almost carrying her as well. We have a guy on the elbow who’s pulling the rope.

We also have a thing called a counterweight, which is when Kong first grabs Ann and kind of shakes her up and down, she’s 30 feet in the air or whatever — there are stunt Anns. It’s another performer who is dressed like Ann, being shaken up and down, so they’re trained in stunt background. They know what they’re doing, they’re all harnessed in, everything is very well thought through. 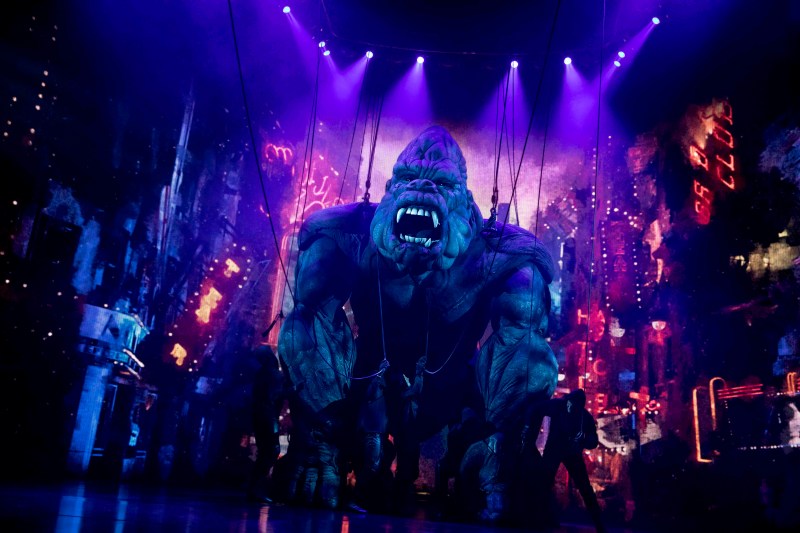 RCL: Is that really your voice? It’s inhumanly deep.

JH: Anything that comes out of Kong’s mouth comes out of my mouth first. I’m growling and snarling and roaring, and I have a microphone that I do all my voices into, and then that’s put through a modulator, which kind of makes him go from a 6’1 man into a 20-foot tall larger-than-life gorilla. But at the core, the creatives always wanted there to be that human real seed within the voice, and then it can be put through a modulator to make it larger than life. That was a really important decision that the creatives made because they could have very easily had Kong onstage and had a puppeteer just pushing buttons, we need a roar here, we need a growl here. But then he can’t really interact with the people onstage, and he’s not truly an actor.

I take it on as a great responsibility to make sure that he is living and he’s reacting in the moment, and that’s kind of the beauty of live theater. It’s not 100% the same every night because audiences are different, people’s energy levels can fluctuate, how they’re feeling. We obviously try to give a great performance but there are certain levels within the performance. Consistency obviously is key, but you never know what you’re going to get with live theater.

RCL: What are the coolest moments of voicing Kong?

JH: Coolest moments are the tender moments that I get to act with Christiani (Pitts) who plays Ann Darrow onstage. Yes, there are a lot of big, huge almost action-set pieces, but then there are a lot of moments where it’s just Kong and Ann on stage, and those are the moments that I really cherish because it’s not about the big movements that Kong does, it’s a small movement makes a big statement in those scenes. Not only do I do the voice, but I control the head and the direction of where the head goes — just a micro headtilt to the left says so much when it’s done with a 20-ft gorilla. I love those little micro-moments that we have together.

RCL: How do you explain your job to people at a party?

JH: It’s funny, I think are a lot of actors who kind of are a bit introverted except when they get on stage, I try not to talk too much about my job, but I’m just kind of like: I’m the voice of King Kong on Broadway.” What is that — what? What? There’s a bit of an explanation that has to go through that, but people are just kind of excited for me, excited at the idea of King Kong on broadway in and of himself, so it’s a fun kind of job description.

RCL: What’s the hardest part of your job?

JW: Probably generally just keeping a consistency in the puppet between what is essentially 14 performers working within an automation track, and if anything faults in that automation track, then my responsibility is to call the action on stage to either go into kind of a holding pattern and improvise while that gets solved.

Because Jon and Danny are very much located on the face and the head, my job is to see the full picture, and I make a lot of onstage calls. There’s a particular scene where a giant cobra fights Kong, so I’m looking at both puppets, keeping calm if anything goes wrong. Luckily I’ve done the performance more than 300 times.

RCL: What will audiences be most impressed with?

JW: They’ll be amazed by the puppet, it is quite awe-inspiring and something they’ve never seen before onstage. The work is six years in the making (it first opened in Australia) and five years coming to Broadway —how many hours and work it takes to make something look so seamless, and so emotive. People have been in tears watching the creature. And they feel it’s human.

(The show itself) sort of stands outside the traditional musical genre, it’s a piece of theater, it’s a musical, the choreography is amazing. It’s not just a show with amazing people, it’s an amazing creative team and ensemble, that have tried to bring a new twist to the story and make it a modern day story.

(And) it’s extraordinary to be a part of. It really is wonderful to come to America because Australian audiences are absolutely lovely, but we have a very English sensibility, and we’re a quiet audience. Americans, they wear their standing ovations on their sleeves, they hoot and holler, and it’s really fantastic to perform this particular show on Broadway in front of American audiences.

“King Kong” opens on Broadway on November 8, 2018, with tickets starting at $49. Glimpse King Kong in all his glory, live on stage, here.