The Best (And Only) “Baby Yoda” Merch Available on the Internet

The plush toys and punchy tees you won't find anywhere else

Three weeks after its debut, Disney Plus’s new Star Wars series is officially the biggest show in the world. According to statistics from Parrot Analytics, a software company that tracks expressions across all major streaming platforms, The Mandalorian is currently 31.9 times more in demand globally than the average TV series.

That’s more than enough to boot shows like Stranger Things and Game of Thrones from the top of the rankings, and it cements a huge early victory for Disney Plus, which launched exactly three weeks ago but already feels like it’s been around for years.

The show works for a few key reasons:

If it’s still a spoiler, it’s the lightest one ever, but just know that Mando gets sent on a mission in the pilot to retrieve (and subsequently deliver to some shady fellas) a bit of precious cargo. That cargo ends up being Baby Yoda, and the show’s off to the races from there.

“Baby Yoda” is technically a misnomer. The real Yoda’s been dead in the Star Wars universe for years, so this isn’t the Jedi Master in his waddling years. But Baby Yoda certainly seems to be of Yoda’s species, and his true identity will almost definitely be the driving mystery in The Mandalorian’s adventures. While that unknown is enough to keep Reddit sleuths occupied into the early hours of the morning, it isn’t the real reason Baby Yoda has become the most universally beloved cultural firestorm in years, a meme lord and a social-media “interactions” behemoth. (According to Axios, Baby Yoda averaged twice as many interactions on articles written about him from Nov. 12-25th — on both Twitter and Facebook — than any Democratic presidential candidate.)

Baby Yoda is one of the cutest things that’s ever happened to the internet, and in 2019, that’s saying a lot. On a recent taping of his podcast, Conan O’Brien discussed how the role of late-night television has changed over the last 10 years. Hosts used to compete with each for laughs and ratings. Now their shows compete with the human attention span. Cuteness shares that distinctly modern struggle with comedy: there’s a ton of it, all the time and all over the place, from babies getting cheese chucked at their foreheads to dogs thoughtfully dragging blankets over their sleeping owners’ toes.

But amid all the noise, Baby Yoda has somehow captured this particular moment in pop-culture history. His looks are a big reason why: true to Star Wars’ George Lucas roots, the toddler isn’t CGI, but actually an animatronic puppet. He stumbles around in a beige bath robe, constantly trying to touch everything, half-swallowing frogs he finds hopping around. He seems as grounded in the scene, as real and as breathing, as all the characters towering above him. At times, when he’s walking alongside Mando, he looks preposterously small, like a little bowling ball with twitchy ears. It’s difficult to watch scenes where Mando gets into fights (often in a bar) and not wonder, worriedly, if Baby Yoda is safely out of harm’s way.

It’s the spirit of Baby Yoda, though, that has infected the internet in all the right ways. If you’re tired of drowning yourself in hateful comment sprees, go read a Baby Yoda thread:

He has made us kinder. He has made us more clever. He is the rare force, in these wayward, frustrating times, who will never let us down, never say the wrong thing, and make our days better seemingly without trying. The other day, while jotting down a list of activities, habits and interests in my phone that seem to improve the quality of my week, I wrote “Baby Yoda” in between “fresh sheets” and “sushi on Mondays.”

Inevitably, I decided to search the internet for a little bit of Baby Yoda to bring home. A T-shirt. A plush toy. But I discovered that the merch available is as lawless and random as Mando’s corner of the galaxy. As Favreau didn’t want to spoil Baby Yoda’s existence, licensed apparel distributors and toymakers are only now scrambling to cash in on the green tot before the holidays. In their stead, a variety of bootleg Baby Yoda products are available from sites that work with independent craftsmen and craftswomen, like Etsy and Society6.

Disney has announced a plush toy … but it won’t ship until next May. And the tees that they released earlier this week look like the designer was running late for lunch. Meanwhile, apparel and accessories could be available on sites like Amazon and Target this Friday. But there are few guarantees that the stock will last, or ship in time for the holidays.

To help you avoid all that mess and stress (which Baby Yoda wouldn’t want, anyway) we took the liberty of finding the best non-licensed merch out there. From sweatshirts to watercolors to travel mugs, this is the best Baby Yoda contraband on the web. It’s all more thoughtfully made than whatever crap the licensing giants cook up in the next couple months, and it’ll all end up being super limited-edition, too. Enjoy, and tune in this Friday for the latest installment of Baby Yoda burning down the internet. 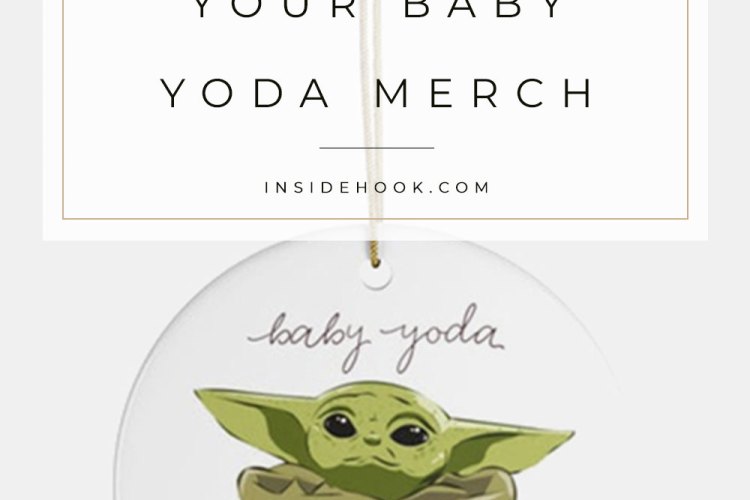 You Need a Sex Towel. These Are the Best Ones.

How to Make Pizza in a Cast-Iron Skillet, Just Like Your Mother Never Did
Is Aaron Jones as Important to the Packers as Aaron Rodgers?
Are Standing Desks Actually a Good Idea for Your Body?
A Playboy Bunny-Turned-Psychic Tells Us the Future of Whiskey
The 5.0 Mustang Is Finally Cool Again. Here’s How to Buy One.