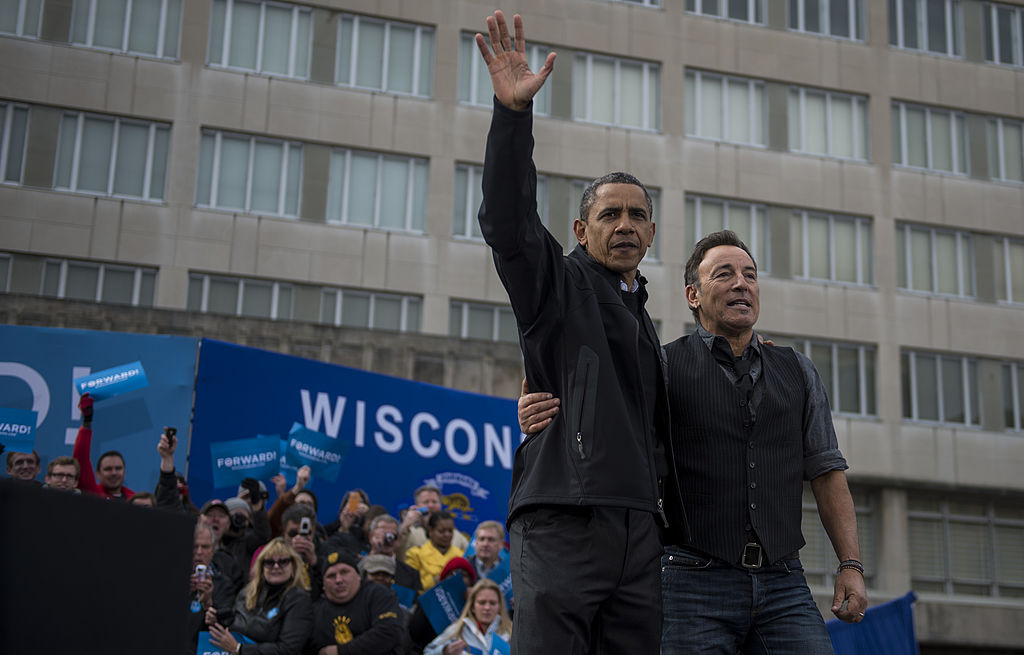 President Barack Obama alongside Bruce Springsteen waves to the crowd during a campaign stop in Madison, Wisconsin, on Monday, November 5, 2012. (Photo by Nikki Kahn/The Washington Post via Getty Images)
By Bonnie Stiernberg / February 17, 2020 5:57 am

Last week, The Strokes made an appearance at the University of New Hampshire’s Whittemore Center Arena in support of Democratic presidential candidate (and eventual winner of the New Hampshire primary) Bernie Sanders, where they expressed their support for the 78-year-old senator and sang “New York City Cops” with an actual cop onstage.

Whether or not Bernie actually enjoyed a little bump in the polls from Julian Casablancas and company is up for debate, but the tradition of presidential candidates hitching their wagons to particular musicians (and vice versa) is a long, rich one that dates back all the way to the early 19th century.

The earliest known campaign song in American political history is “Adams and Liberty,” a song with lyrics praising John Adams’ re-election bid in 1800 by Robert Treat Paine, Jr., set to the tune of the Star-Spangled Banner.

In the years following Adams’s presidency, some campaign songs were originals that featured lyrics penned specifically about the candidate rather than an existing song being repurposed. Presidents like James Madison (“Huzzah for Madison, Huzzah”), Abraham Lincoln (“Lincoln and Liberty”) and Warren G. Harding (“Harding, You’re the Man for Us”) all employed this tactic.

While the ’30s and ’40s saw FDR and Harry S. Truman going the more traditional route (Roosevelt went with “Happy Days Are Here Again” in 1932, while Truman’s 1948 campaign opted for “I’m Just Wild About Harry” from the Broadway play Shuffle Along), the candidate-specific-lyrics trend saw a brief comeback in 1960 when Frank Sinatra released a new version of his 1959 hit “High Hopes” tailored to his pal John F. Kennedy.

Choosing a song that will convey a candidate’s message while still being innocuous enough to appeal to a wide swath of voters can be tough. Do you go for vague platitudes or try to score some cool points? Do you opt for a no-brainer like “This Land is Your Land” (George H.W. Bush) and “America” (Michael Dukakis), or do you try to bring in some star power like Bill Clinton did with Fleetwood Mac’s “Don’t Stop” in 1992? (Or do you do what Ross Perot did, and fully lean in, choosing Patsy Cline’s “Crazy”?)

Some candidates wind up choosing a mini playlist of sorts, rotating between several different choices instead of sticking with one single pick. Barack Obama, who to this day puts out an annual playlist of his favorite tunes, used nine different songs between his two presidential campaigns, including will.i.am’s viral “Yes We Can,” Stevie Wonder’s “Signed, Sealed, Delivered, I’m Yours,” U2’s “City of Blinding Lights,” Aretha Franklin’s “Think” and two Springsteen tracks (“The Rising” and “We Take Care of Our Own”).

That more freewheeling approach can lead to controversy when the song in question is by an artist whose views don’t align with those of the candidate. In 2016, Donald Trump received a cease-and-desist from The Rolling Stones after using “You Can’t Always Get What You Want” at a rally (which, it’s worth noting, is also a deeply weird sentiment to go for when you’re trying to get elected). “The Rolling Stones have never given permission to the Trump campaign to use their songs and have requested that they cease all use immediately,” a Stones spokesperson said at the time, though Trump ignored the request. George W. Bush, however, obliged when he received a cease-and-desist in 2000 from Tom Petty after using “I Won’t Back Down,” switching his campaign song to Billy Cyrus’s “We the People” instead.

As for the 2020 race, November’s still a long way away, which means we’ve got plenty of Democratic campaign songs still in the mix. While he’s embraced the Strokes to the point of selling T-shirts with his name styled like the band’s logo, Bernie Sanders has opted for a different early-’00s garage-rock revivalist for his campaign song — The White Stripes’ “Seven Nation Army” (along with John Lennon’s “Power to the People”). Elizabeth Warren has taken the stage to Dolly Parton’s feminist, working-class anthem “9 to 5,” while Pete Buttigieg shows off his emo bonafides with Panic! at the Disco’s “High Hopes.”

Joe Biden — perhaps in an effort to remind voters of his successful ’08 and ’12 campaigns with Barack Obama — has returned to Springsteen’s “We Take Care of Our Own,” while Amy Klobuchar’s pick (Dessa’s “The Bullpen”) boldly declares, “Forget the bull in the china shop, there’s a china doll in the bullpen.”

Ultimately, they’re all choices meant to allude to each candidate’s values while appealing to their target demographics — carefully selected by politicians and campaign staff to cultivate image and get rally-goers appropriately riled up. In that sense, they’re a far-cry from the old-fashioned “Huzzah”s of our country’s early days.