A Visitor looks at paintings by US artist Chuck Close entitled 'Roy I' and 'Agnes'during the press opening of the exhibition 'Icones Americaines' (American Icons) at the Grand Palais on April 07, 2015 in Paris, France. The exhibition runs from April 8 to June 22. (Chesnot/Getty Images)
By Matthew Reitman 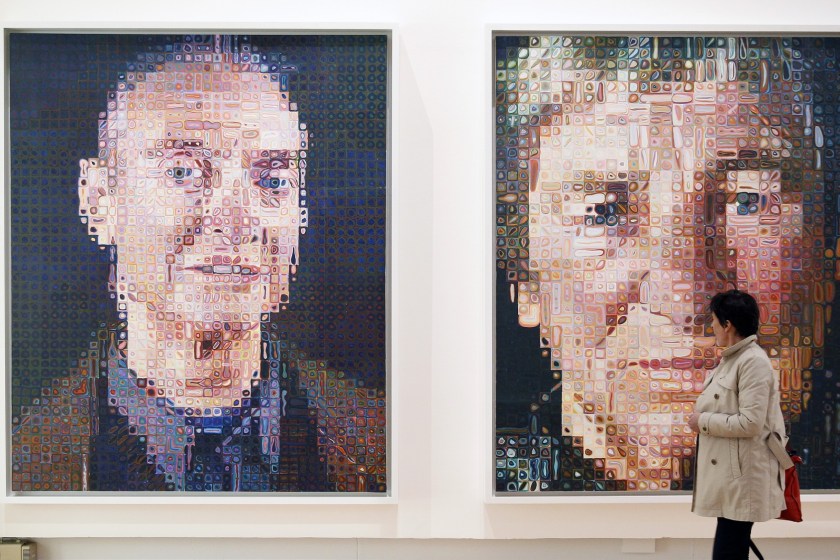 A visitor looks at paintings by US artist Chuck Close entitled ‘Roy I’ and ‘Agnes’ during the press opening of the exhibition ‘Icones Americaines’ (American Icons) at the Grand Palais on April 07, 2015 in Paris, France. (Chesnot/Getty Images)

At the age of 76, renowned artist Chuck Close radically upended his life. Known for his big, bright portraits, the artist had been struggling with a mental block. He recently moved from his home in New York to a new apartment in Miami Beach, simultaneously divorcing his wife of 43 years as he also altered the style that makes his portraits instantly recognizable all around the world. 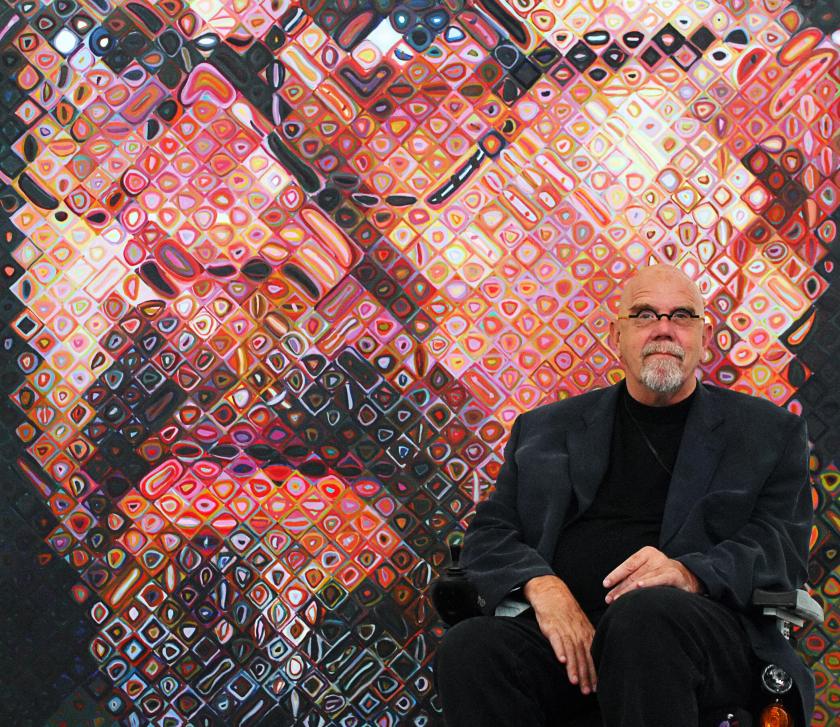 Chuck Close sits in front of one of his paintings, a self portrait, 24 May 2007  at the exhibition “Chuck Close returned looks, Portraits 1969 / 2006” in the “Ludwig Forum” in Aachen, Germany. (Henning Kaiser/AFP/Getty Images)
AFP/Getty Images

As he caught up with the New York Times Magazine‘s Wil S. Hylton, Close seemed slightly resigned. It was not a moment of weakness, but more of a reflection. His artistic block caused him to think about how he has gotten to this place in life. Hylton explains:

“One of the things you hear people say about Close now, with the supposed benefit of hindsight, is that the medical catastrophe he suffered in 1988, which took his mobility and nearly killed him, also revolutionized his work. The nightmare crashed down on a warm Wednesday afternoon in December. He was attending an awards ceremony for artists at Gracie Mansion when a flattening exhaustion swept through him and he stumbled outside, tripping down the street to Doctors Hospital, where he collapsed inside the doorway and, within an hour, lay paralyzed from the neck down. But losing control of his hands, the story goes, forced him to abandon the conventions of realism and develop a novel way of painting: dividing his canvas into a grid and then filling one square at a time to create a dynamic neo-pointillist effect. This is a tidy, bow-wrapped narrative, which should be the first indication that it’s wrong. Something about Close seems to invite this sort of pop-­psych exegesis.”

Read the full story by Hylton here. To learn more about Close’s process with the big portraits he’s known for, watch the video below.