Meet the Dystopian Artist Behind Amazon's "Tales From the Loop" 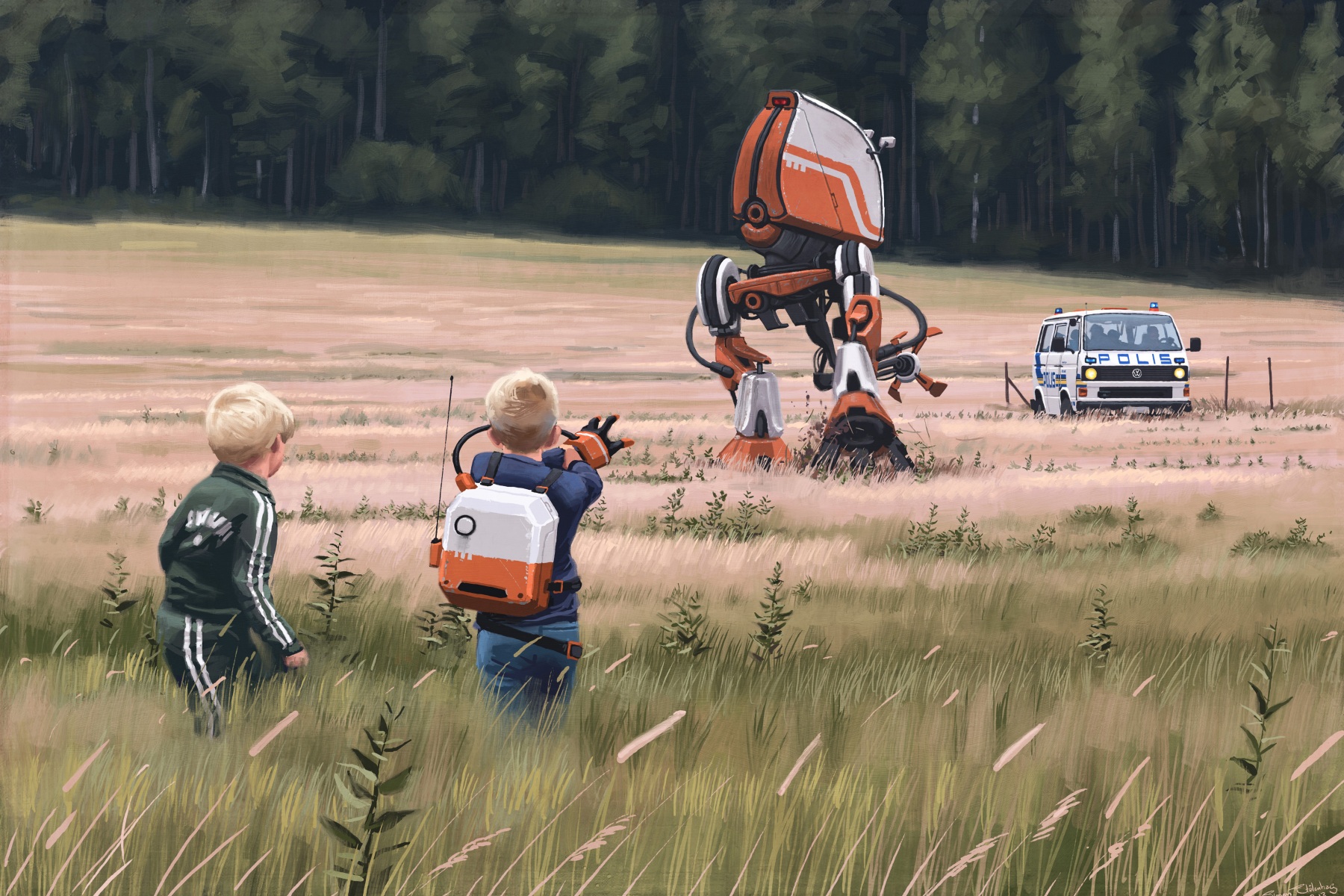 While their tones have been radically different, acclaimed shows like On Becoming a God in Central Florida, Stranger Things and American Crime Story have all shared a clear affinity for the pop-culture motifs of the ’80s and ’90s. One thing that they’ve all lacked, though, has been the retrofuturistic technology that defined the decade’s sci-fiction boom, from looming robots to massive hovering vehicles.

That blend of nostalgia and futurism led Swedish illustrator Simon Stålenhag to create a series of paintings featuring idyllic scenes of families in rural landscapes … albeit ones that has been transformed by the presence of experimental technologies. Here, vehicles personal and massive float several feet off the ground, robots roam through the woods and other, more mysterious technologies lurk — often in a sate of disrepair — in the distance.

The first collection of his artwork in this vein, Tales From the Loop, was released in 2015 to wide acclaim. Writing about the book in io9, Andrew Liptak compared Stålenhag’s storytelling — which includes both vivid artwork and reminiscences by a narrator — to a classic science-fiction novel. “While reading through this book,” Liptak wrote, “I couldn’t help but shake the feeling that I was reading something comparable to the brilliant novel Roadside Picnic by Boris and Arkady Strugatsky: there’s technology everywhere, but it’s been cast aside, abandoned, ripe for exploration.”

Stålenhag’s images are frequently evocative. One particularly massive painting depicts a nighttime scene in a suburban development. Two people stand beside what looks like a late-1980s Saab. The interiors of houses glow warmly in the night, and scattered illumination provides a sense of security in parking lots. And then, in the distance, something vast resolves itself: a hovering cargo vessel the size of an aircraft carrier, making its way a hundred or so feet off the ground. It feels at once utterly familiar and jarringly ahistorical — and that juxtaposition recurs memorably throughout Stålenhag’s book.

Now, Tales From the Loop has been adapted for television, via a high-profile series on Amazon helmed by showrunner and Legion alumnus Nathaniel Halpern. Its cast is led by Rebecca Hall, Paul Schneider and Jonathan Pryce, all of whom are more than up for some emotional heavy lifting. The series relocates the action to Ohio, and the blend of a Midwestern setting and an overall feeling of nostalgia adds a bit of Ray Bradbury into the mix, thematically speaking.

But it’s the artwork of Stålenhag that set all of this into motion — which makes for more than a few moments in the show where Stålenhag’s detail-focused artwork seems to have been converted wholeheartedly into live action.

“I was having so much fun doing it,” Stålenhag says when asked about the challenges of the project. For him, the balance between the project’s realistic and uncanny elements was the most work. “I was careful with not doing too much science fiction,” he says. “The part of the pictures I worked hardest on was actually bending the science-fictional elements so that the landscape and the people and the clothing and everything was, in a way, the real stuff, the stuff that exists, which was stuff from my own life and my childhood growing up.”

“That was the big passion for me, going into this project,” he says.

At the time that he began painting these pictures, Stålenhag was working at a gaming company. “I tried to fill the project with as much stuff as I couldn’t do at work,” Stålenhag recalls. “Robots and hovercrafts — those sorts of things that I could do at work. So I tried to do all the weird personal stuff and crammed that into this project.”

The level of specificity in Stålenhag’s book, as well as the text that accompanies some of the artwork — written from the perspective of someone who grew up around these bizarre forays into experimental technology — give it a personal grounding that simply focusing on the technology might have missed. “I never had any intention of doing something that was only science fiction, or futuristic or more classic sci-fi,” Stålenhag says. “It began with me wanting to do something that was set in the early ’90s.”

Stålenhag consulted both his own childhood photos of growing up and historical archives when making Tales From the Loop. “I used any kind of resource I could find,” he says. “I even visited an archive with photos of that region.”

“Something I did for the second book was to find really good archival footage of a stree, with cars and people in their everyday life,” he says. “Because your memory — my memory at least — isn’t that good.” He revisited the Tales From the Loop world in 2016’s Things From the Flood; 2018’s The Electric State shifted his focus across the Atlantic to depict an America littered with bizarre robotic technology.

Stålenhag also made use of his own photography as he developed his artwork. “It’s part of my daily routine — just go out and take pictures,” he says.

Even so, he’s always careful to check his work, so that his alternate version of the recent past is still faithful to the recent past. “I remember we had a Mercedes but I didn’t remember exactly which year and make and everything,” he recalls. “Oftentimes when you think back and you don’t do the research, you think we had an early-’90s Mercedes, but actually it was a late-’70s Mercedes. But those were very common in the early ’90s.”

Stålenhag’s process also involved some more hands-on research. “I bought some miniature cars — small, very detailed things that you’re supposed to have in a collector’s  locker or something,” he says. “I used them like props, though. All those miniatures now have all their rear-view mirrors and antenna all broken off, because I basically played with them like a child.”

The landscape in which Stålenhag set Tales From the Loop is located not far from Stockholm — “It’s kind of a rural Sweden,” he says. “It’s very flat and there’s no mountains.  It’s a very boring part of Sweden.”

Even so, it’s one that Stålenhag found himself revisiting when he traveled to Winnipeg to visit the set of the series based on his books. (He’s a co-executive producer on the show.) “It was very weird going there and finding a place on the other side of the planet that looked pretty much the same as where I grew up and where I came from,” he says. “So I got on a plane and got off and it looked the same, but I had been flying for 14 hours.”

A flight that lasts for 14 hours and takes you to an alternate version of the place you just left? That sounds not unlike a story that could play out in one of Stålenhag’s paintings.