Matt Asiata #44 of the Minnesota Vikings rushes for a touchdown in the first quarter of the game against the New York Giants on October 3, 2016 at US Bank Stadium in Minneapolis, Minnesota. (Adam Bettcher/Getty Images)
Getty Images
By Matthew Reitman

It was a wild Week 4 in the NFL. Sunday started early with a Jaguars win in London over the Colts, who have a long flight home and no rest without a bye week ahead of them. It was a tough Sunday in particular for quarterbacks as the Jets’ Ryan Fitzpatrick threw three interceptions, and the Panthers’ Cam Newton and Cardinals’ Carson Palmer both left their games in the fourth quarter with concussions.

The Bills denied the Patriots the satisfaction of going undefeated without Tom Brady, shutting out New England at home for the first time in over a decade. Finally, Ben Roethlisberger finished Sunday by raining down touchdowns on Kansas City’s defense. The Pittsburgh offense, at full strength with the return of running back Le’Veon Bell, looked resurgent after being crushed in Philadelphia last week.

Last night, the Minnesota Vikings defense suppressed one of the best wideout trios in the NFL—the New York Giants’ Odell Beckham Jr., Victor Cruz, and Sterling Shepard—to move to 4-0. Vikings’ quarterback Sam Bradford threw for 262 yards and a touchdown. If the team stays healthy, the Vikings could be serious contenders this year.

See each game’s greatest moment below. 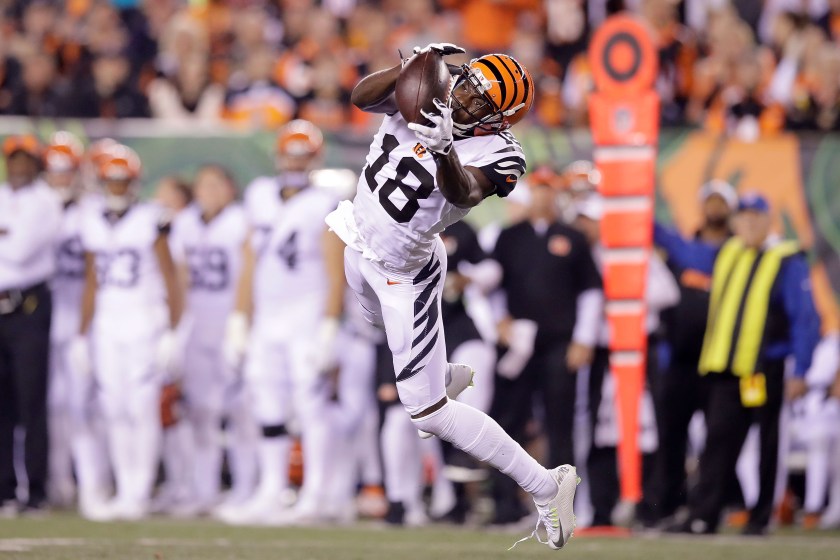 A.J. Green #18 of the Cincinnati Bengals catches a pass during the second quarter of the game against the Miami Dolphins at Paul Brown Stadium on September 29, 2016, in Cincinnati, Ohio. (Andy Lyons/Getty Images)
Getty Images 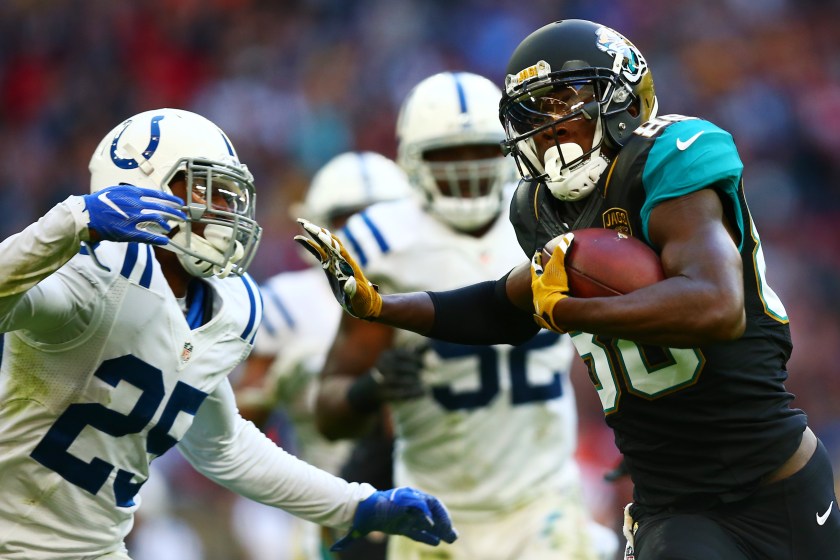 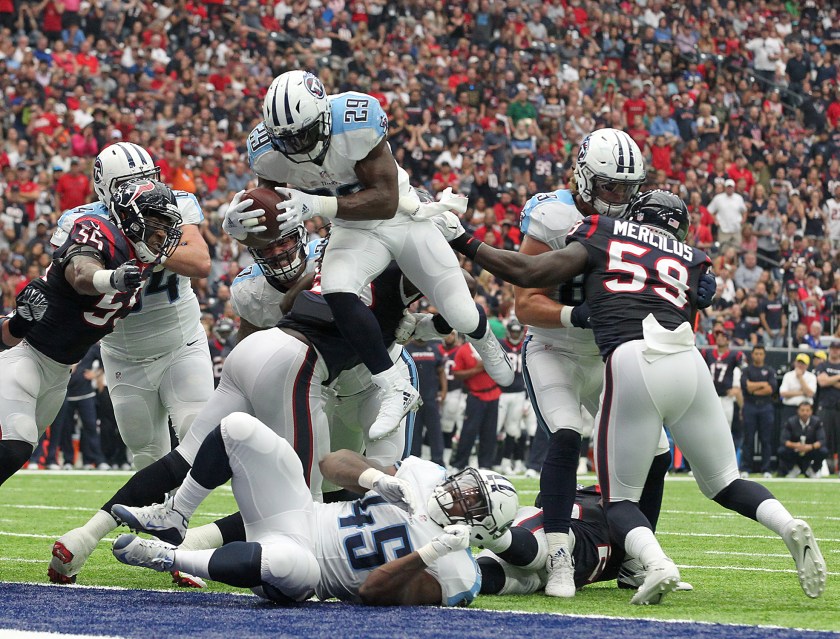 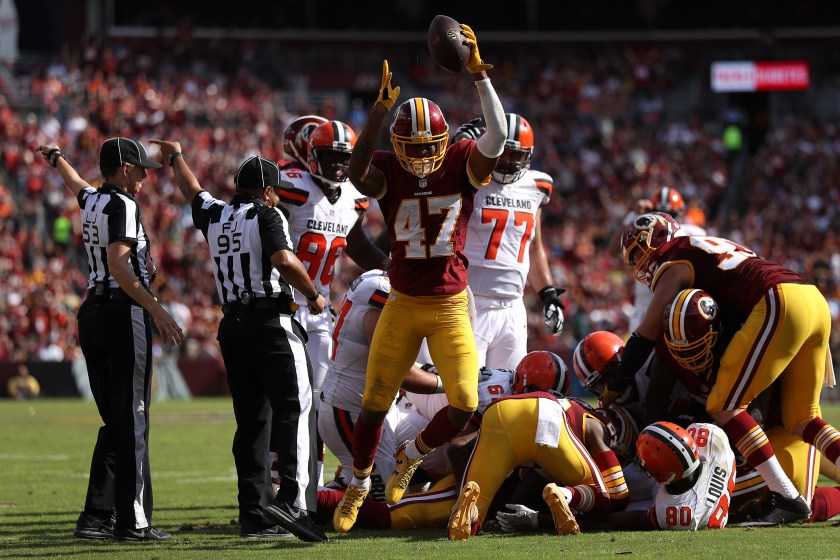 Cornerback Quinton Dunbar #47 of the Washington Redskins celebrates after recovering a fumble against the Cleveland Browns in the third quarter at FedExField on October 2, 2016, in Landover, Maryland. (Photo by Patrick Smith/Getty Images)
Getty Images 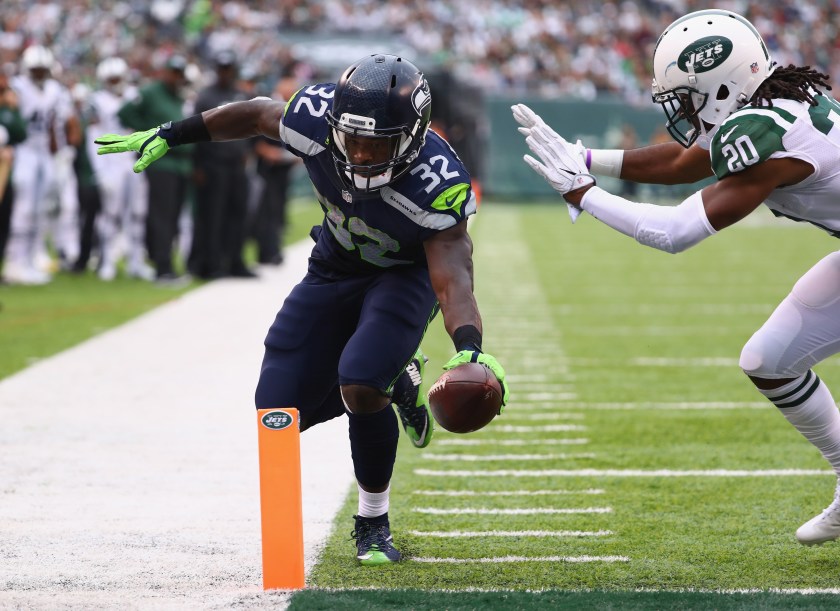 Christine Michael #32 of the Seattle Seahawks scores a touchdown against Marcus Williams #20 of the New York Jets in the fourth quarter at MetLife Stadium on October 2, 2016, in East Rutherford, New Jersey. (Photo by Al Bello/Getty Images)
Getty Images 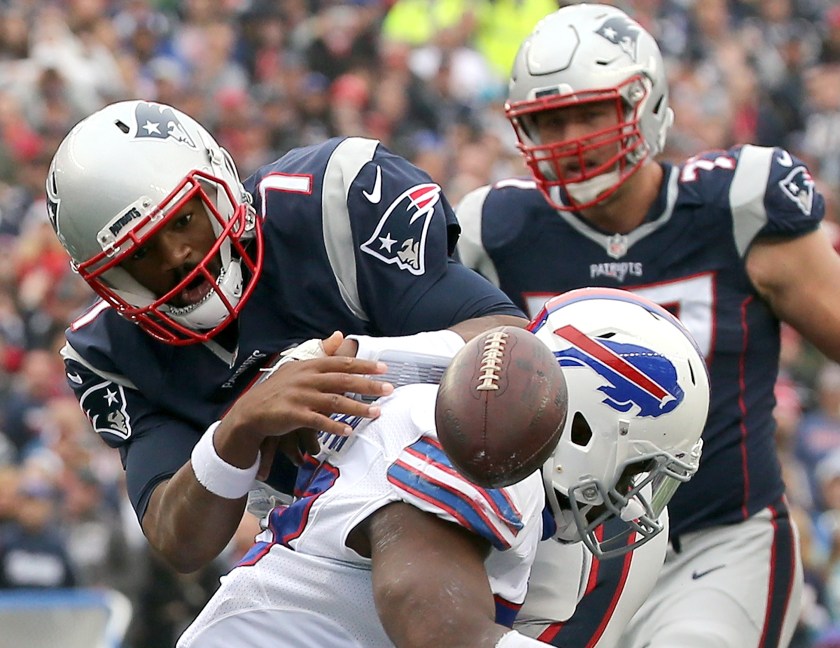 Jacoby Brissett #7 of the New England Patriots fumbles the ball as he is hit by Zach Brown #53 Buffalo Bills in the first half at Gillette Stadium on October 2, 2016, in Foxboro, Massachusetts. (Jim Rogash/Getty Images)
Getty Images 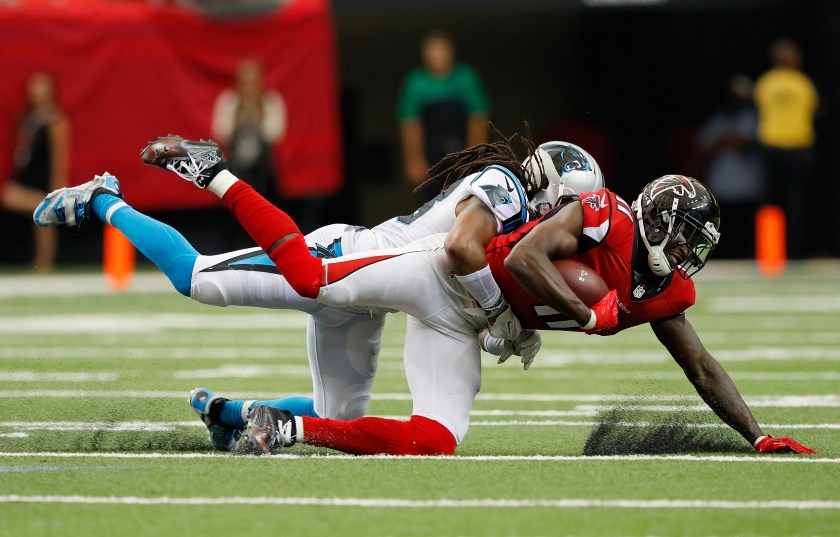 Julio Jones #11 of the Atlanta Falcons dives for more yardage as he is tackled by Tre Boston #33 of the Carolina Panthers at Georgia Dome on October 2, 2016, in Atlanta, Georgia. (Kevin C. Cox/Getty Images)
Getty Images 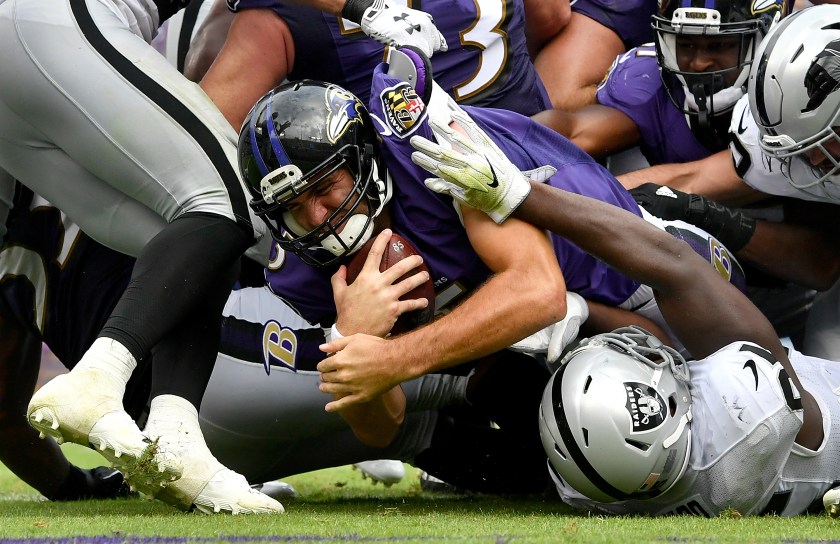 Joe Flacco #5 of the Baltimore Ravens scores a touchdown in the third quarter against the Oakland Raiders at M&T Bank Stadium on October 2, 2016, in Baltimore, Maryland. (Larry French/Getty Images)
Getty Images 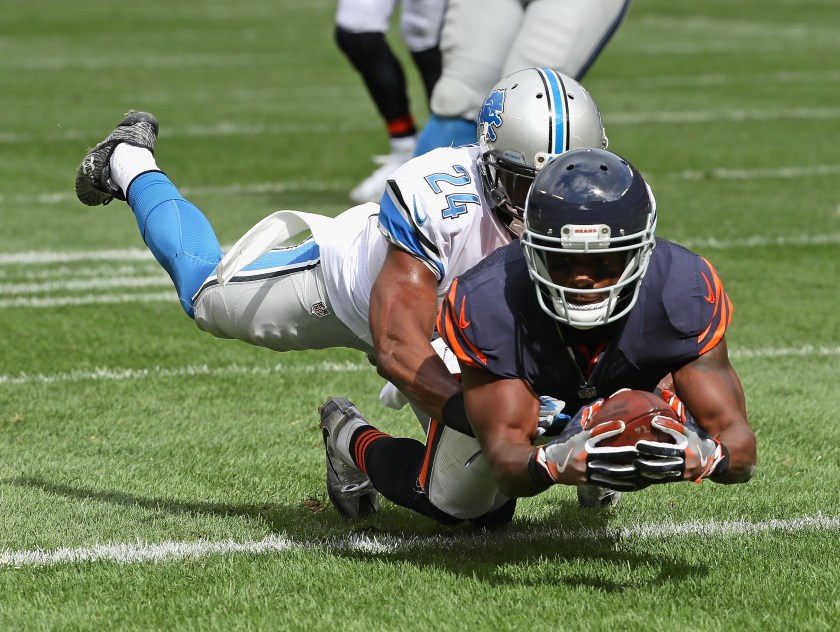 Eddie Royal #19 of the Chicago Bears falls into the end zone to score a touchdwon dragging Nevin Lawson #24 of the Detroit Lions with him at Soldier Field on October 2, 2016, in Chicago, Illinois. (Photo by Jonathan Daniel/Getty Images)
Getty Images 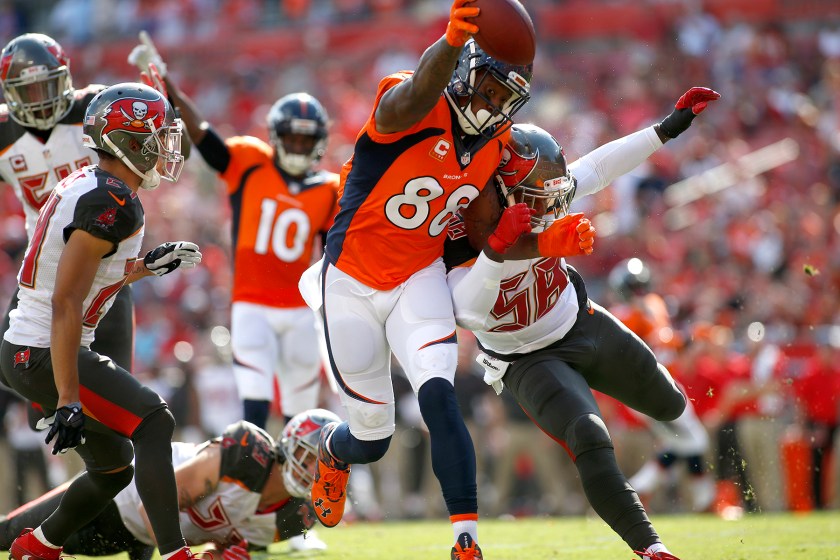 Wide receiver Demaryius Thomas #88 of the Denver Broncos fends off middle linebacker Kwon Alexander #58 of the Tampa Bay Buccaneers as crosses the goal line for a touchdown during the first quarter of an NFL game on October 2, 2016, at Raymond James Stadium in Tampa, Florida. (Brian Blanco/Getty Images)
Getty Images 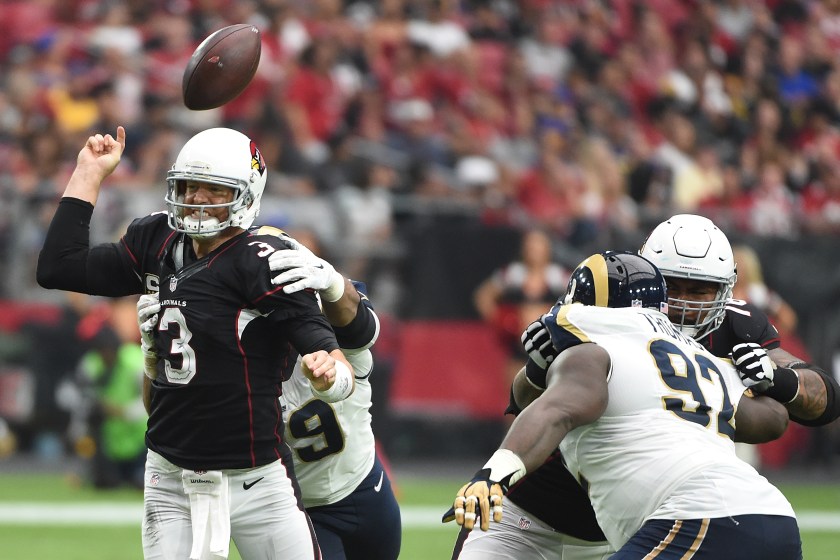 Quarterback Carson Palmer #3 of the Arizona Cardinals is hit by defensive tackle Aaron Donald #99 of the Los Angeles Rams during the second half of the NFL game at University of Phoenix Stadium on October 2, 2016, in Glendale, Arizona. (Norm Hall/Getty Images)
Getty Images 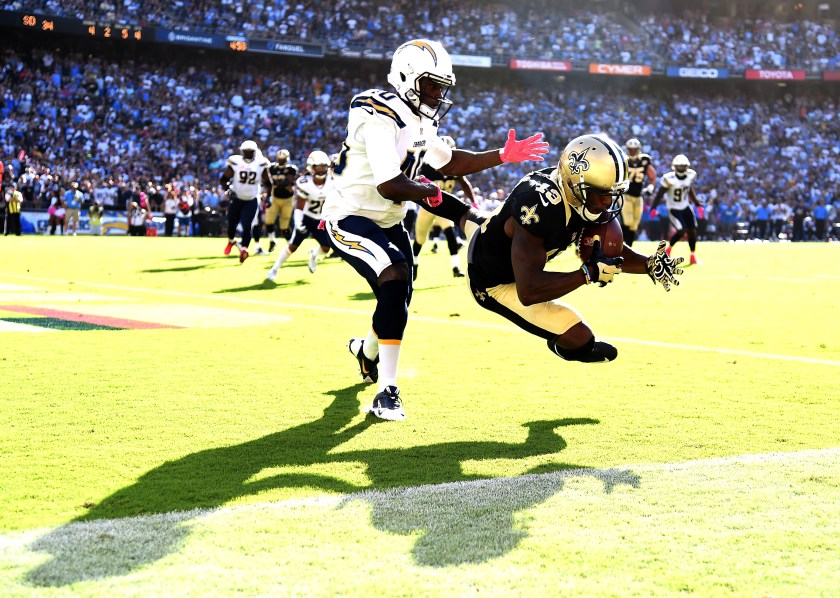 Michael Thomas #13 of the New Orleans Saints makes a catch for a touchdown in front of Pierre Desir #40 of the San Diego Chargers to trail 28-34 during the fourth quarter at Qualcomm Stadium on October 2, 2016, in San Diego, California. The Saints came back to win 35-34. (Harry How/Getty Images)
Getty Images 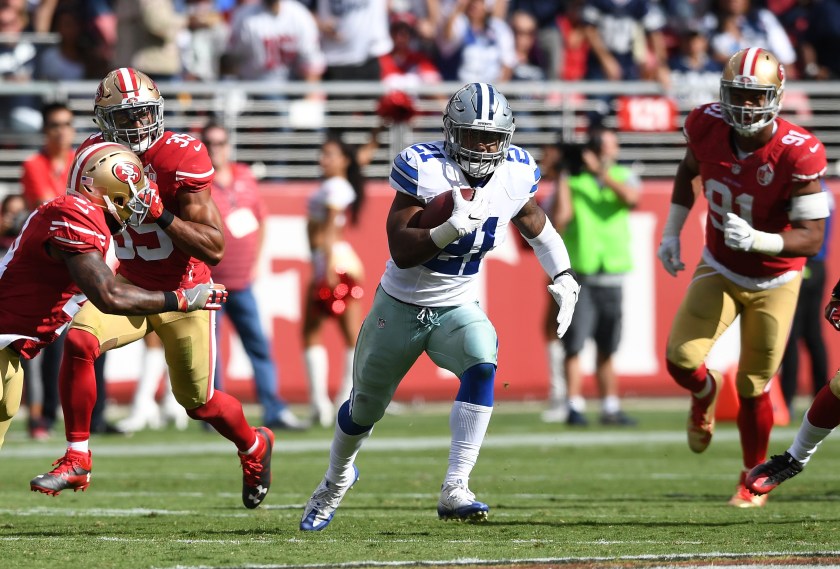 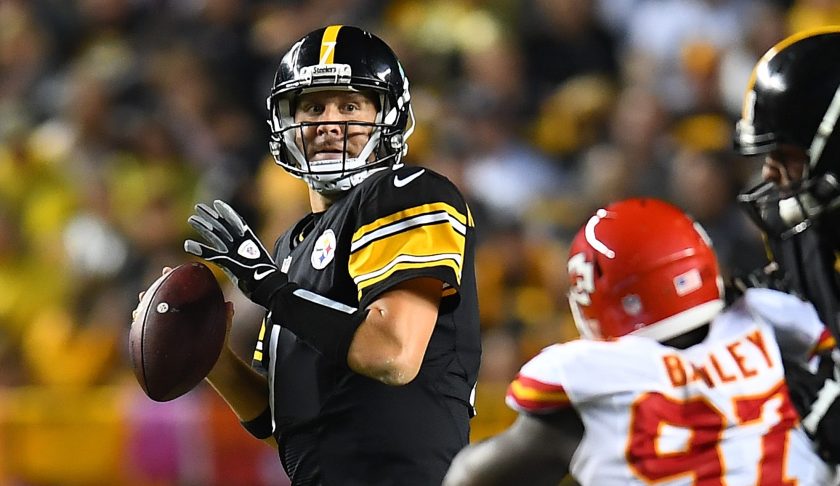 Ben Roethlisberger #7 of the Pittsburgh Steelers looks to pass in the second half during the game against the Kansas City Chiefs at Heinz Field on October 2, 2016, in Pittsburgh, Pennsylvania. (Joe Sargent/Getty Images) 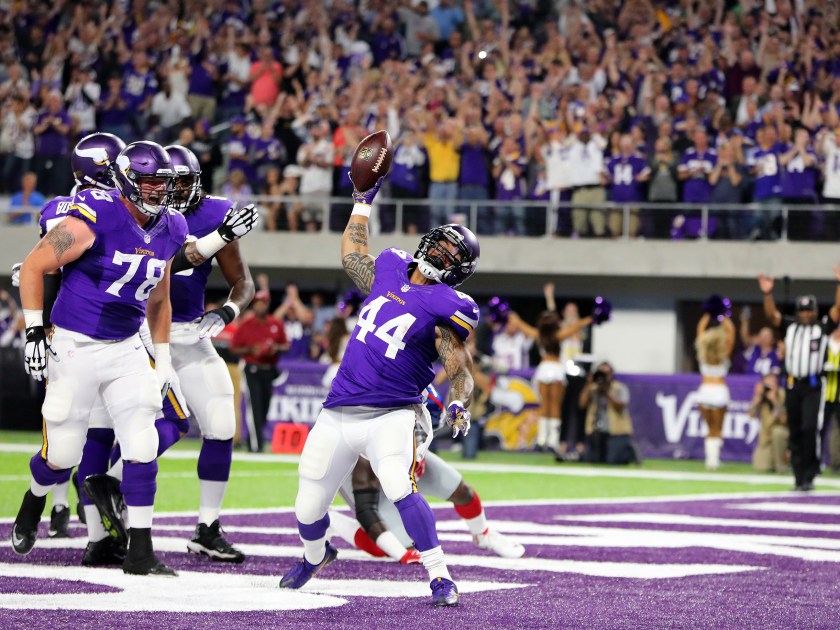 Matt Asiata #44 of the Minnesota Vikings rushes for a touchdown in the first quarter of the game against the New York Giants on October 3, 2016, at U.S. Bank Stadium in Minneapolis, Minnesota. (Adam Bettcher/Getty Images)
Getty Images