Historical and Breathtaking Cinemas From Around the World

From unbelievable transformations to sordid histories, these are must-visits for any cinephile. 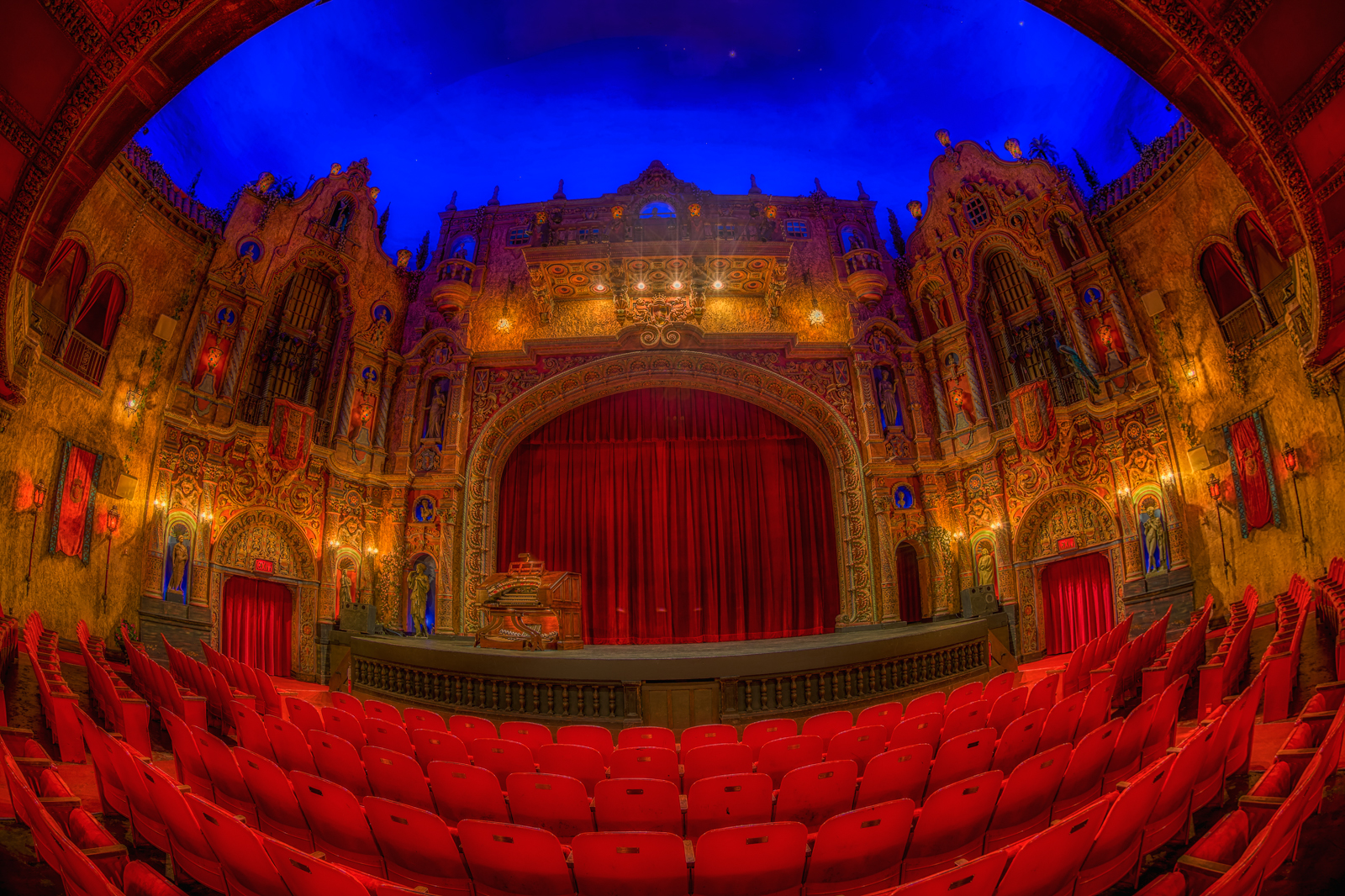 A full fisheye view of the Tampa Theatre in Tampa, Florida. (Matthew Paulson/Creative commons via Flickr)
Matthew Paulson
By Diana Crandall / April 16, 2018 5:00 am

Catching a flick is likely the last thing on your mind when traveling abroad, but it shouldn’t be. Foreign films won’t just give you a better idea of how a country’s culture is represented on-screen — in many places, just going to the theater is a tourist destination in and of itself. Take a look at some of the jaw-dropping, unique and historical movie theaters from around the globe.

History: As one of a precious few movie theaters still civic-owned, this beloved movie theater once had more than 900 seats filled by weavers and mill-workers in Hebden Bridge, England. Nearly shuttered in the late ‘60s and turned into a carpet warehouse, it was saved by the city. Since then, there have been upgrades and renovations made to the cinema, including a refurbishment in 1978 that restructured 492 seats and left movie-goers “generous” legroom. Between 15-26 movies are screened each month, according to the theater’s site, and visitors can expect a range of tastes, from foreign language to Hollywood to art-house. 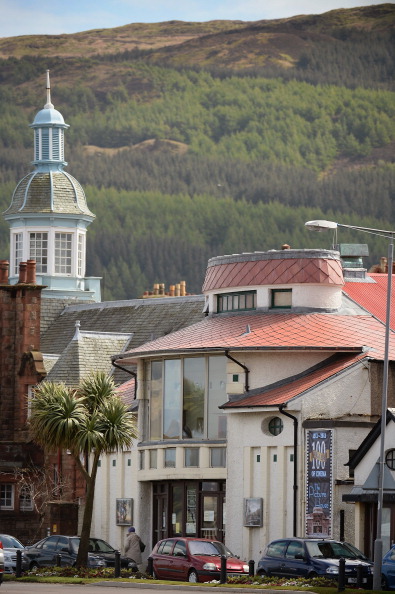 Exterior view of the Picture House on May 23, 2013 in Campbeltown, Scotland.  (Photo by Jeff J Mitchell/Getty Images)
Getty Images

History: This may be the only place in the world you can catch a fish while watching a movie. Well, it used to be that way, anyway. Sun Pictures in Broome, Australia, is the world’s oldest operating picture garden. Set in the outdoors, moviegoers could expect tidal flooding until 1974 when a levee bank was built across the marsh. Today, expect to lean back in a canvas deck chairs to catch a flick, but don’t worry — your feet will stay dry. One note of warning: A pivotal moment of the movie might be interrupted by the roar of an engine. Sun Pictures is located directly below a highly trafficked flight path. 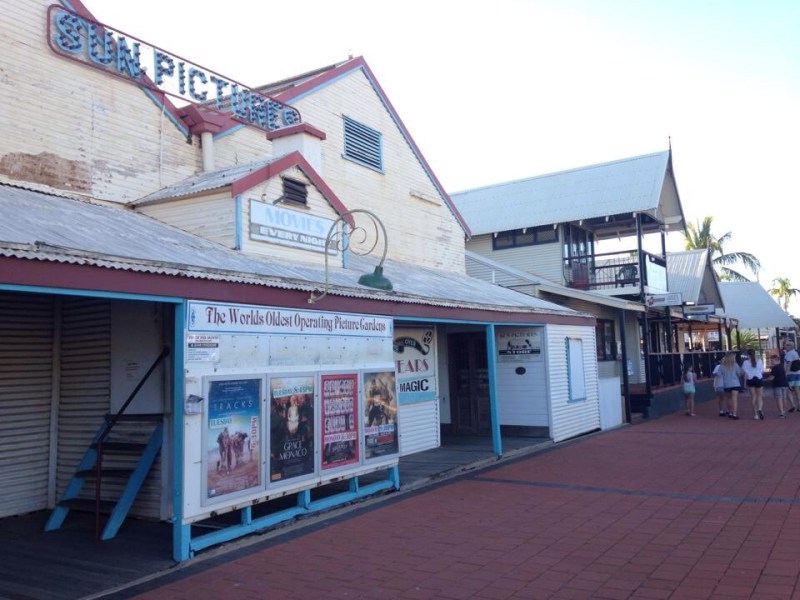 History: Dedicated exclusively to the screening of nonfiction film, Cineteca De El Matadero in Madrid has a colorful history. Originally opened in 1924 as a slaughterhouse, architects transformed it into a public cinema center between 2009 and 2011, when it opened for business. Visitors report that the influence of the livestock and manual labor is still ever-present, with wood paneling, brickwork and woven patterns seen throughout the buildings — though you won’t run into any animals there today. There’s also a film archive, movie and television studio, offices, a canteen and a summer film patio on site.

The theatre focuses exclusively on non-fiction content. A scene from a short film festival is pictured. (Flickr/Creative Commons via Gabri Solera)
Gabri Solera

History: As the first commercial building in Tampa with air conditioning, it’s not hard to believe this theater was extremely popular when it opened. Designed by John Eberson, it’s better described as a film palace rather than a movie theater. Subject to a similar history as its century-old counterparts, the theater was almost shut down in the 60s and 70s, but its community rallied to save it. Today, it is lavish to the point of extravagance, with viewers treated to gargoyles, old-world statuary, a romantic Mediterranean courtyard and a ceiling that depicts a twinkling night sky — and that’s all before the picture begins. 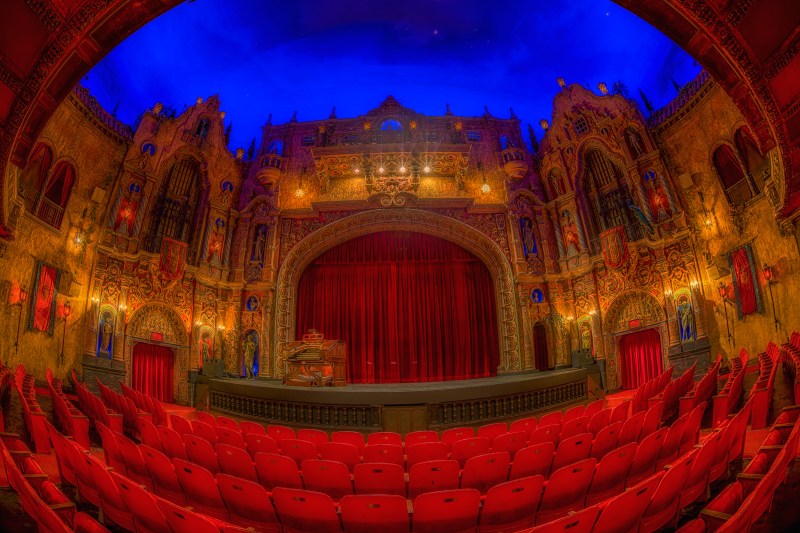 History: It’s a masterpiece by any measure, sponsored and opened by real estate mogul Abraham Icek Tuschinski nearly 100 years ago to widespread praise and admiration. The cinema is one of the country’s crown jewels, and looks and feels like a castle on both the inside and the out. Unfortunately, it has one component of its history that’s horrific: Because of his Polish-Jewish descent, Tuschinski had his property seized by Nazis in World War II and was subsequently deported to Auschwitz where he was murdered. His name lives on as moviegoers continue to admire this incredible piece of architecture. 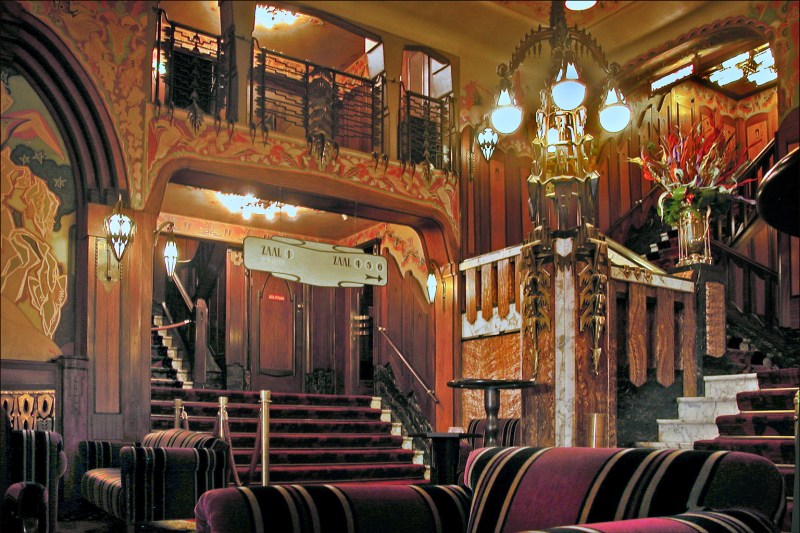 History: Originally an Italian Embassy ballroom opened by Princess Labia in the 1930s, the Labia Theatre is now the oldest independent art-repertory cinema in the country. Converted to a movie theatre in 1989, the owner, Ludi Kraus, left the wood paneling and the original box office untouched.

“I went from being an attorney to a theatre owner, and that’s what my wife, Ann, and I have been doing ever since,” Kraus told a local outlet in 2015.

Throughout the Labia’s history as a theatre, Kraus has worked hard to circumvent strict censoring laws that would otherwise have kept certain films from screening. Today, he has more of their trust — and brings an old-world moviegoing experience to the devoted locals, a combination that makes this movie theater a must-visit. 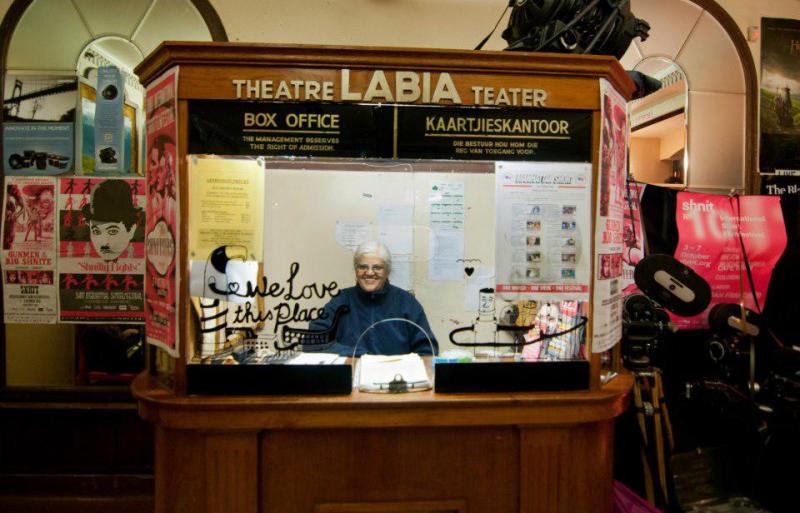 History: A Depression-era building designed by the renowned architect Timothy L. Pflueger, it was only considered truly remarkable for a few short years before financial difficulties and neglect caused it to decline. It was purchased in 1972 by the Oakland Symphony Orchestra Association and restored, officially becoming a National Historic Landmark in 1977. 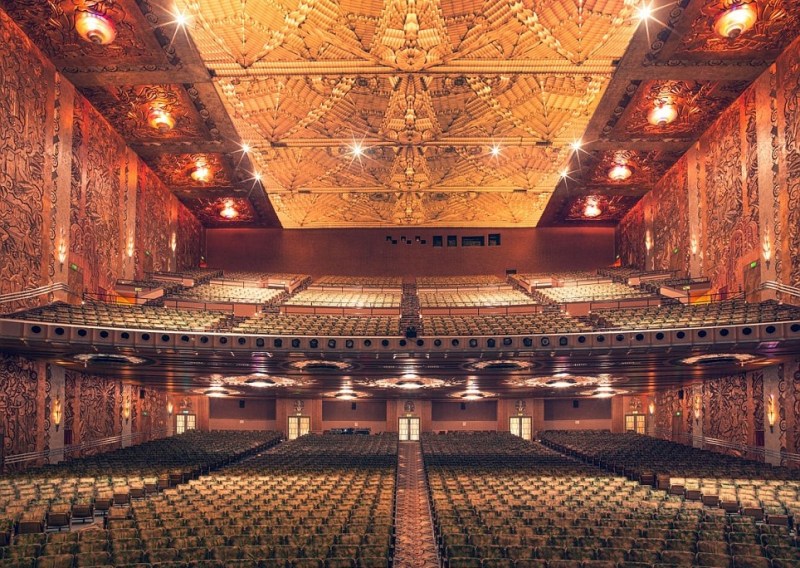 Inside the Paramount Theatre in Oakland, California. (Flickr/Creative Commons via Charmaine Zoe)

History: As NPR notes, time stopped for Havana’s movie theaters when Fidel Castro seized control of the country in 1959. If you find yourself in Havana, it’s worth taking a step back in time to a place you literally can’t find anywhere else on Earth.

“Basically, the city is the same city we had 50 years ago,” architect and city historian Miguel Coyula told NPR. “That’s magic and that – I would preserve that magic. I will like to – I would say, okay, let’s preserve the movie houses where they are because it’s a kind of movie that – movie house that doesn’t exist anymore.” 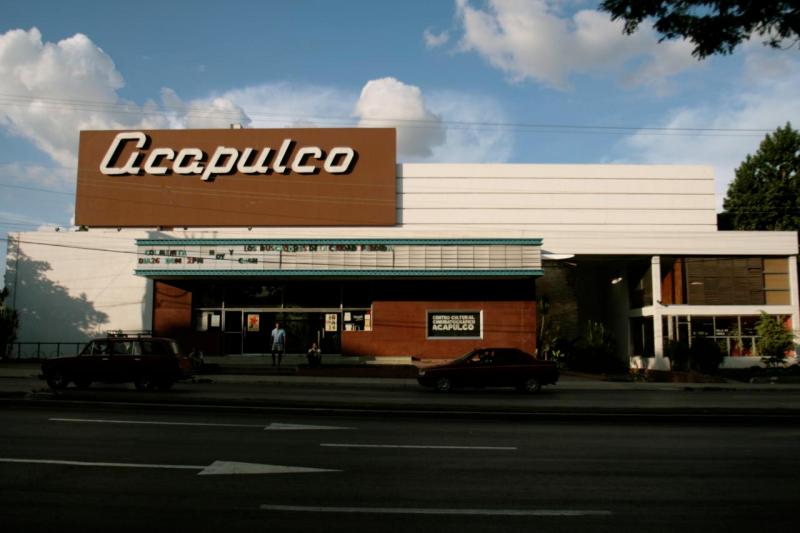 Cine Acapulco from the outside (Flickr/Creative Commons via Bruna Benvegnu)

History: The Bookshelf Cinema is exactly what it sounds like: Half bookstore and half movie theater, with a bar in between. But even though it’s only been open since the early 1970s, it has no shortage of infatuating history. The likes of John Irving, Michael Ondaatje and Margaret Atwood are just a few of the authors who have stopped by for literary readings, while Canadian musicians including Serena Ryder and the Constantines have graced the bar’s stage. Show up for a beer, a book, a film festival or a Friday night flick next time you’re in Ontario. You won’t regret it! 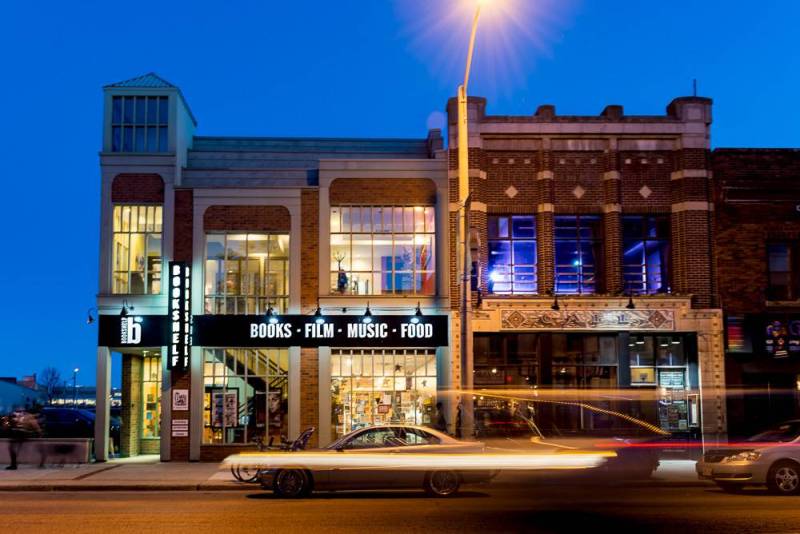