The good, the self-made and the Papa John. Sigh.

Turns out slow and steady still wins the race.

Examine the 195 newcomers to the 2017 FORBES World’s Billionaires list, and you’ll more likely see a 50-, 60- or 70-year old who’s built up his or her business over time than the next insta-Zuckerberg.

Still, there are plenty of tech newbies on the list. There’s actually plenty of everything on the list, including an increasing numbers of women (24) and new billionaires hailing from China (76).

Every success has a story behind it. Here are six from the Forbes list.

The Greenie
Name: Yvon Chouinard
Age: 78
Worth: $1 Billion
Why He’s So Damn Rich: You like the outdoors? Chouinard is the founder and owner of Patagonia, the environmentally-friendly lifestyle brand (they now make 100% recyclable clothing). He’s one of the 13% of billionaire newcomers to hail from the U.S.
Fun fact from Forbes: Chouinard taught himself blacksmithing at an early age to make reusable climbing equipment that wouldn’t hurt the environment.

The Kids
Names: John and Patrick Collison
Ages: 26 and 28
Worth: $1.1 billion
Why They’re So Damn Rich: They cofounded the online payment processing firm Stripe, a business recently valued at $9.2 billion. John is now the world’s youngest self-made billionaire.
Fun fact from Forbes: The Collisons were already millionaires by the time they were teenagers, after selling their first business to eBay for a cool $5 million in 2008.

The Long Life of the Party
Name: Juan Francisco Beckmann Vidal
Age: 77
Worth: $5.2 billion (the richest newcomer to the list)
Why He’s So Damn Rich: Booze. Vidal is the chairman of Jose Cuervo, which just went public in February.
Fun fact from Forbes: Tequila runs in the family. Vidal is the eleventh generation to run Jose Cuervo (and his son is the CEO).

The Toymaker
Name: Manny Stul
Age: 68
Worth: $1.4 billion
Why He’s So Damn Rich: Stul took over Moose Toys 17 years ago. Since then, sales have spiked 7,000%, mainly from their Shopkins line (ask your young daughter).
Fun fact from Forbes: Well, not “fun” but just an amazing story … Stul’s parents were Holocaust survivors. He was born in a refugee camp in Australia.

Sigh. This Guy.
Name: John Schnatter
Age: 55
Worth: $1 billion
Why He’s So Damn Rich: Yeah, that’s Papa John. Shares in his ubiquitous pizza chain are up 58% in the last year.
Fun fact from Forbes: Schnatter started Papa John’s out of a bar’s broom closet in 1984. 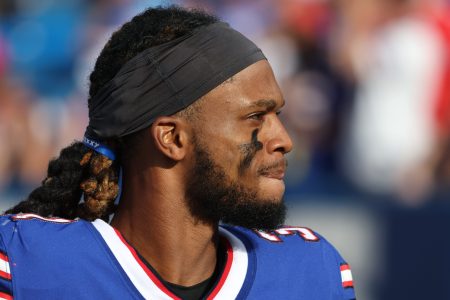 As NFL Celebrates Damar Hamlin's "Remarkable Improvement," He Still Has No Pension