On "benching,” politics and how not to be sleazy

For this edition of First Date With, we link up with Dutch-Canadian model, DJ and good woman to know Eva Shaw to chat ghosting v. benching, comedy clubs and taboo first-date topics. Be sure to check out her collaboration with G-Star RAW and her new single, “Rise N Shine” both of which just dropped. Girl’s got it going on (just take a look at her Instagram). Here’s what she told us.

Eva Shaw: New York is definitely the worst as a female if you’re looking for a relationship. I think everyone just has too many options there and no one can commit. But depends what you’re looking for. If you want to just be casual and enjoy being single, it’s perfect. I travel all over the world, but I’m never anywhere long enough to really meet anyone.

IH: Who was your last instant crush?

ES: My boyfriend! He’s amazing. But that’s kind of a lame answer so I’m gonna go with Jason Sudeikis.

IH: What about a guy’s body language is a dead giveaway to steer clear? Conversely, what makes you melt?

ES: If he doesn’t look at your eyes when he talks to you, he’s a sleazebag. Some guys just stare at your mouth (or somewhere else). I find funny guys really attractive. I’m not necessarily into the male supermodel look. I like someone with tons of expression in their face. I always love a tall guy as well (I’m 5’10” without shoes). I also think it’s important to just be an honest, nice guy. Girls don’t like assholes, no matter what you guys try to tell yourselves!

ES: Dates are the worst. I always feel so uncomfortable. I guess something casual where you aren’t obligated to talk the whole time. Maybe start off at a comedy club and if it’s going well, grab a drink after.

IH: What’s the best/worst first date you’ve been on?

ES: The worst date of all is when only one of you thinks it’s a date.

IH: Do you like it when a guy asks you where to go or just chooses?

ES: I don’t mind if he asks, but just make the decision. I’m so indecisive.

IH: How do you like a guy to dress on a first date?

ES: I always like casual on a guy. Nothing too stiff. I like a guy who has style, though.

IH: What are three fail-safe conversation topics on a first date?

ES: I normally talk about weird or funny topics. I like to see if they have a sense of humor and if they do, it makes the date fun. You definitely need to ask the person about themselves and that always leads into something else. There’s always the good old weather topic!

IH: What topic should a guy steer clear of?

ES: I don’t really think you have to steer clear of anything. People would say maybe don’t talk politics or anything controversial, but I think it’s good to get to know someone’s viewpoints early on. I would maybe not start talking about babies and marriage, however.

IH: What’s up with benching (i.e., staying in touch with someone until you’re more available)? Can I do that?

ES: Yeah. Maybe you end up just being friends. Maybe one person’s situation changes. But I think normally if you don’t hit it off immediately, it will never really happen. I wouldn’t keep your hopes up in this situation for anything more than friendship. 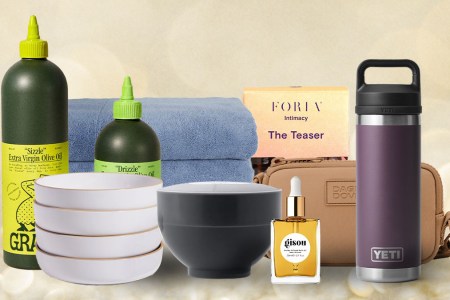