Ask A Cool Dad: Once and for All, Can I Bring My Kid to a Bar?

Plus: Do I absolutely have to dress my baby like me? 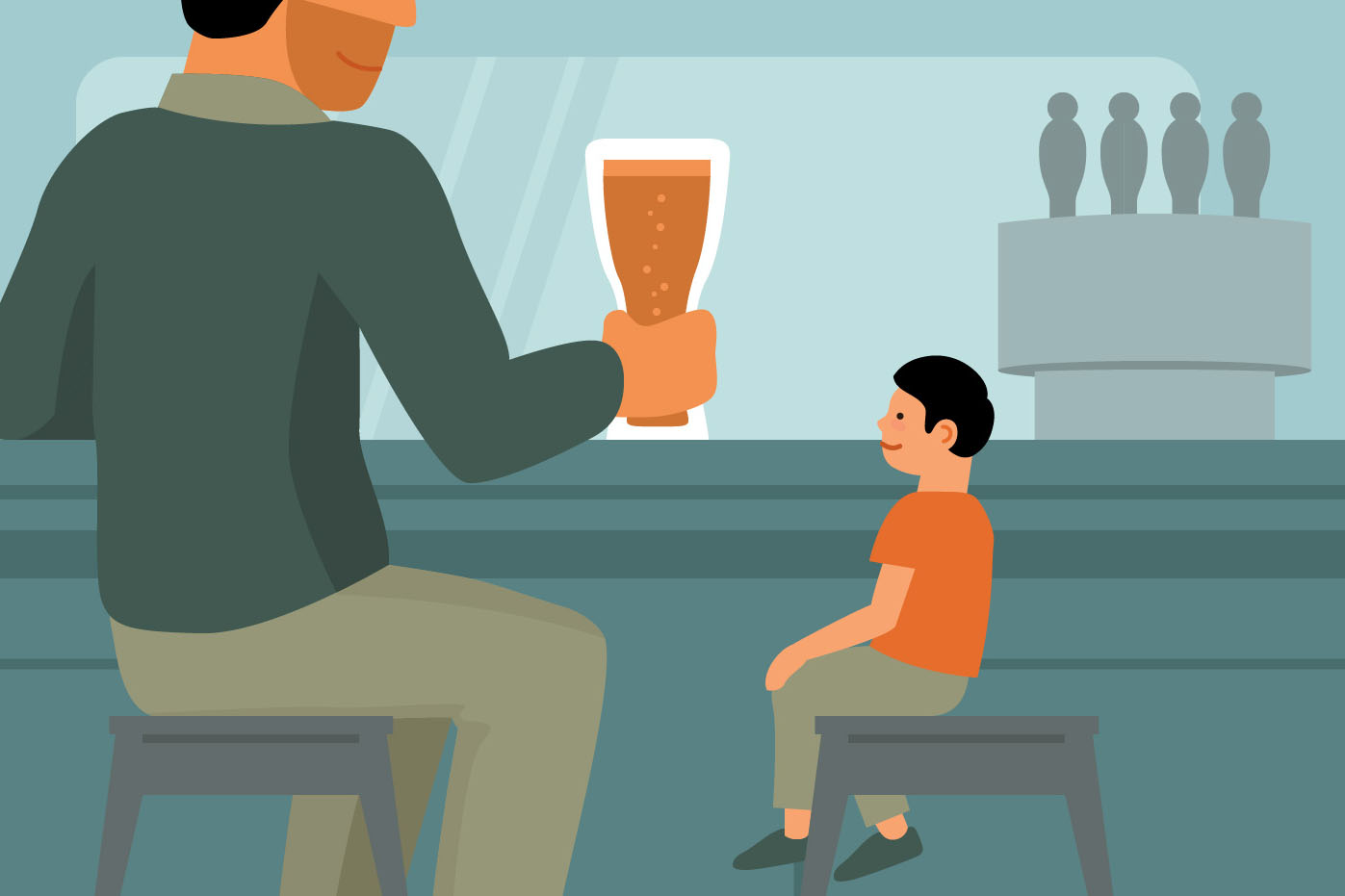 Have parenting questions of your own? Send them to cooldad@insidehook.com.

One of the hardest things for my wife and I to adjust to since the birth of our son just over a year ago has been the fact that we haven’t been able to go out to bars as much as we used to. We should have seen this coming, obviously, but it’s been harder than we thought it would be. Now that he’s gotten a little older, though, we can distract him with an iPad for at least long enough for my wife and I to enjoy a couple beers in peace. I know people have very mixed feelings about this, but where do you stand on kids in bars?

There are a lot of different factors that come into play here, but rest assured, we’re going to get you and your wife out on the town in a place that you will enjoy for long enough to get both of you good and drunk. You’ll just have to follow a few common-sense rules along the way.

First, consider the establishment. Sorry, but your days of going to the coolest new dive bar or “night club” or whatever are long gone. Breweries tend to be more family-friendly than lots of more traditional bars, if only because they tend to have more open space. Bars that also serve food are generally way better than those that don’t.

You’re also gonna want to consider the location. If you moved to some fancy new neighborhood specifically so you could have kids, chances are lots of other people did as well and are also wondering if they can bring their kids to bars. If you all just quietly agree to bring your kids out, everything will be fine, and maybe you’ll even make some Cool New Parent Friends. I do not recommend walking over to, like, the gritty, hipster-y part of town and setting up camp with your giant stroller and a bunch of Cheerios in the middle of a bunch of 22-year-old artist-types, because they’ll all hate you. But more importantly, they’ll kind of make you hate yourself, too. And with good reason!

Finally, and maybe most importantly, consider the time of day. Assuming you follow the rules above, it’s actually pretty easy to justify taking your kid to a bar during the day. But once the sun goes down and the table candles come out, it’s time for you to take the kid home. He probably needs to get to bed anyway — and let’s be honest, so do you.

I’ve got a 6-month-old baby at home, and everyone keeps gifting us onesies with the logos of things they know I, a 38-year-old man, enjoy. Bands, record labels, bookstores … I get why it’s supposed to be Cool, but something about it seems almost desperate? Almost as if I’m treating my kid as a living advertisement for … I don’t even know what. Me? Am I overthinking this?

I’ve got mixed feelings about this one. These people are just trying to be nice, obviously, and you should count yourself lucky that anyone knows anything about you at all, even if it’s just that you really like Wilco or whatever. But I do share your concern that something about it makes you look a little bit silly. Like you’re so worried that having a kid will cause everyone to forget that you were once Cool that you resort to using your kid as a billboard to remind them now that, come to think of it, no one even bothers to look at you anymore.

The whole thing is kind of dopey, of course, because babies don’t actually have good taste in anything. You can orchestrate it for a few years by only exposing them to the stuff you like, thus enabling you to bring them to parties and stuff and be all like, “Yeah, man, I don’t know what it is, but she really loves Thurston Moore’s criminally underrated 1994 solo album Psychic Hearts.” But rest assured, as soon as they’re old enough to start knowing about stuff other than what you shove down their throat, they’re gonna start getting into some truly terrible shit, and there’s nothing you or some dumb Ramones shirt can do about it.

But, ok, you want a more succinct answer? Refrain from buying any of that stuff on your own. But if someone is kind enough to buy it for you, just go ahead and put it on the kid next time you see that person. No harm done.

My daughter is in the third grade, and she seems to get along with everyone in her class very well. She has playdates outside of school with a bunch of the girls, but she also talks a lot about playing with the boys during recess. Her birthday is coming up, and a lot of the kids have started having boys-only or girls-only parties. She says she wants to stick with just the girls, but it seems kind of crappy. Should we encourage her to rethink it?

First, I’d like to commend you for your instincts here. This is one of the more troubling aspects of watching your kids grow up: this notion that as they get older — but not even near, like, puberty age, necessarily — it somehow becomes normal for boys and girls to separate, ultimately encouraging them to embrace all sorts of stupid gender stereotypes and internalize this feeling that the body parts they were born with make them fundamentally different from people who were both with other body parts. Arguably, this seems like a more dangerous seed to plant in the mind of little boys than little girls, but it’s shitty regardless.

My suggestion would be to just make sure your daughter knows the choice is hers to make. Explain to her that you love that she’s remained friends with the boys, and be honest with her: tell her that you think the world would be a better place if we drew fewer lines between people based on arbitrary and uncontrollable factors. She might still decide to only invite the girls, but the conversation alone will have done some good.