After a brazen heist, an expert in high-class thievery explains what happens next.

Your adrenaline is still pumping as the speedboat bounces over the waves, beating a hasty maritime getaway from a spectacular heist.

Well, the heist itself may not have been spectacular — it was a broad daylight smash-and-grab, after all. But while the operation may have lacked some measure of elegance, the target and the take certainly didn’t: you’ve swiped Sweden’s literal crown jewels from a centuries old cathedral.

So far, it’s been a clean getaway, and you steal a look at your royal loot. But then a thought crosses your mind: Now what?

At least that’s the question I had after reading about the real-life robbery at Sweden’s Strängnäs Cathedral earlier this week in which police said thieves grabbed two jewel encrusted gold crowns and an ornate orb with a crucifix on top of it before escaping via nearby motorboat.

Could the thieves really sell that stuff? Is there a black market for very easily identifiable Swedish royal headgear and what Monty Python fans might mistake for the Holy Hand Grenade of Antioch?

To help answer those questions, I called up Robert Wittman, a former senior FBI official and key player in the creation of the bureau’s Art Crime Team. Wittman left the FBI in 2008 after a 20-year career, much of which focused on recovering priceless pieces of art after thefts similar to the one in Sweden. In fact in 2005 he helped Sweden reclaim a Rembrandt that had been stolen by another group of thieves that also made their getaway in a motorboat.

In this new case Wittman, who now runs a private firm focusing on art theft recovery, said there is no high-class black market where the thieves could sell the loot directly. If that’s what they were counting on, they’re almost certainly out of luck.

“Especially with unique pieces like that, those crowns, it’s going to be impossible to try and sell them as they are,” he said.

Some robbers, he said, “make better criminals than businessmen.”

But assuming the thieves knew a little something about what they were doing, Wittman said there were a few more realistic options.

First, the thieves could pop out the jewels and melt down the gold to sell separately, thereby at least partially obscuring where it all came from while turning a modest profit.

Beyond being a terrible affront to Swedish history, Wittman said that strategy wouldn’t make great financial sense considering how much the pieces would be devalued if they were broken up like that. A handful of precious stones and a chunk of melted gold would fetch a fraction of a fraction of the value of the original, intact pieces. 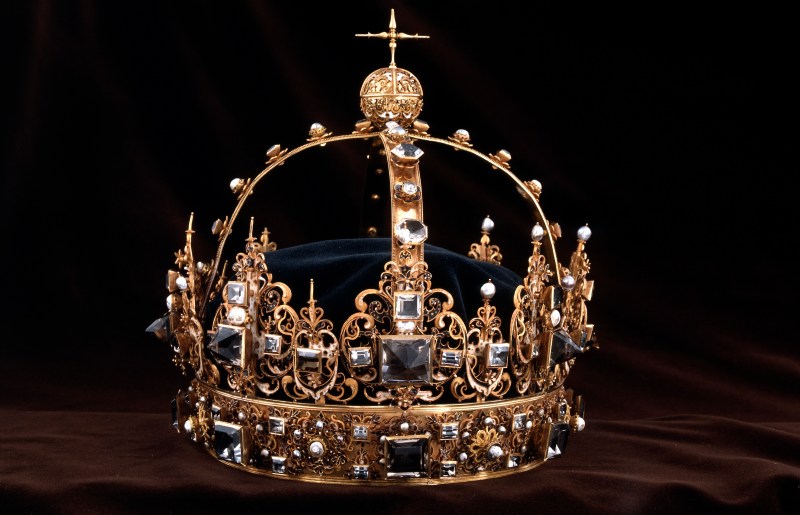 The Swedish crown, one of the items stolen in a daring heist from Sweden’s Strängnäs Cathedral. (Image: Wikimedia Commons)

More likely, he said, the thieves could use the crowns as leverage in some other ongoing criminal case involving a member of the gang or a compatriot.

“They take things like that so they can have some leverage to negotiate a lesser sentence or have prosecutors drop a sentence or something of that nature,” he said.

Wittman said there is precedent for that kind of thing, and the strategy was used successfully to influence a criminal case in another European nation in the past.

There’s also the remote possibility, envisioned in the spy novel “The Nearest Exit” by Olen Steinhauer, in which a thief steals something culturally priceless in order to simply sell it straight back to the insurance company assigned to the case for a tidy profit. Wittman said that kind of thing might work in rougher parts of the world, but would be unlikely to succeed in Sweden.

However it’s done, Wittman said he’s confident the crowns will eventually be returned to the Swedes.

“If they have to do a negotiation, they will get the pieces back,” he said.

As to whether the thieves will be caught and prosecuted, that’s another question.

“Throughout my career I was always more interested in getting the material back than catching people and putting them in jail,” he said. “But we always recover our cultural property at some point.”