The Aftermath of the California Wildfire: “I Didn’t Recognize the Place”

RCL correspondent Kinga Philipps captures the devastation near her home.

Malibu is 27 miles of scenic beauty. Those are the words on the sign that welcomes you to this Southern California riviera home to the rich and famous, artists, surfers and those just getting by with a desire to live in this magnificent enclave of hikes, canyons, beaches and world class surf breaks. 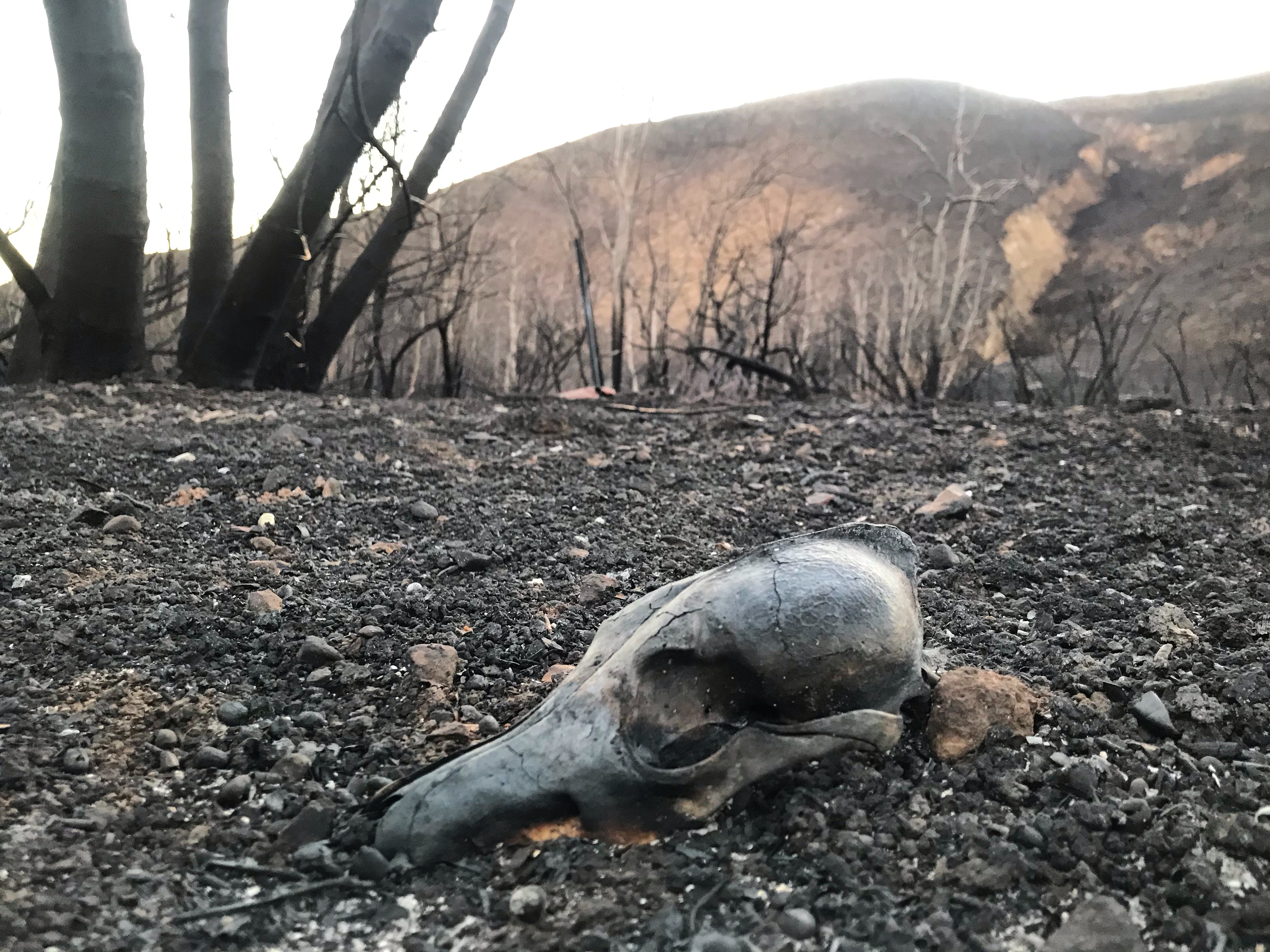 Despite the splendor, there is a price to be paid. In this desert-esque, Mediterranean climate, full of sage brush and succulents, we incur a levy for our year round 70 degree existence with a few natural phenomena that level the playing field with increasing frequency as our climate creaks and groans under the strain of our inhabitation.

One of the most destructive of these forces are the wildfires spurred by our seasonal Santa Ana winds. Fall is the main fire window in Southern California. It’s when the humidity dips to non existent levels, the warm winds begin to gust from the hot interior of our state and piles of dry brush layer the hills like kindling waiting patiently for a spark. The conflagrations arrive nearly every year…mostly started by our own hands in the form of unattended campfires, tossed cigarettes or electrical mishaps.

The November 2018 Woolsey fire has now become one of the most devastating fires in California history. Reports state nearly 1,500 structures lost, three live claimed and countless hours of cleanup, rebuilding and emotional recovery. This time around I was fortunate enough to be just outside the evacuation zone.

The fire was so dynamic, the news couldn’t keep up. It wouldn’t have mattered anyway as power and internet was lost within hours ironically to those where the information was needed most. The most up to date reports came via social media. Residents recorded dramatic rescues of horses and alpacas as 70-foot flames licked the blacked skies. Fireballs bounced off hoods, erupting into apocalyptic spark showers as escapees attempted to flee via one of the only lifelines that connects our beach community to other parts of Los Angeles. It took people on average over four hours to leave Malibu amidst the chaos.

For days after the fire erupted people didn’t know if their homes were still standing. Ultimately I lost count of how many friends came back to find nothing but foundations and scattered bricks. A record number of charred chimneys now occupied my Instagram feed symbolizing the final bits of peoples former lives. Tragic beyond words, but all this can be rebuilt.

Even before the flames died down, and long before any sanctioned aid organizations were allowed in, boats full of donated supplies were making their way to the hardest hit areas via rogue operations put together by groups of friends. People swam in water and food on paddle boards and surfboard when authorities refused to let them dock boats at the piers. Teams of civilians worked for days to access and rescue any animals left behind. People helping both their two legged and four legged neighbors became the gold standard in the midst of ashes.

The most visual perspective of the damage came a week post fire when Pacific Coast Highway was reopened to through traffic. I drove my familiar route up the winding coast to assess the magnitude of the historic blaze. The once scrubby green hills looked like they had been colored by a grimy black crayon. The air smelled intensely of damp campfire.

For me the epicenter of the experience was as much about the nooks and crannies of the wild spaces as it was about anything manmade. Malibu’s quintessence is in its mountains and state parks that roll down to the storied surf. Most of us live here so we can roam. We’re the free range city folk who like to exist on the outskirts of a metropolis. What I wanted to see most was someplace I knew like my own living room. My favorite hike. A little 2.3 mile loop that has acted as my place of solace and personal gym for the last 18 years. I’ve probably walked this trail two thousand times.

I’ve hiked it during super blooms, under meteor showers, during magnificent sunsets, in the rain…on a train, in a box with a fox. Well, I have seen a fox… and coyotes, deer, bobcats, snakes, lizards, thousands of bunnies and even a badger…he tried to bite me. I was ok with that because he was a truly awesome creature. I’ve encountered transients camping this trail when they have nowhere else to sleep and witnessed three engagements.

But that day I saw my hike wiped clean. A first hand account of a fast moving wildfire that spares nothing in its path. So many animals lost. I didn’t expect that. It looked surreal. Like a moonscape.

I wandered for hours across the burnt terrain marveling at the power of nature. I didn’t recognize this place. Like a detective, I followed clues until stories came together. Every few feet I stepped over an animal carcass. Mostly ground squirrels and bunnies. In places they lay in groups of six or seven, usually against an embankment they mistook for shelter but became a death trap as the flames encroached with nowhere to go. Then I found deer, coyotes, a weasel. Big, fast, strong animals that I thought for sure could outrun the carnage. The ocean is only yards away. I stood in somber solidarity with all the creatures lost in front of the most recognizable part of my hike, an old chimney that was once a ranger station destroyed in wildfires many years ago. A reminder that this too shall pass and it shall come again and again. Nature has her ways and these fires are her clearing crew. Then I started to see green stems peeking out from the earth. Hope.

It sank in that this scene is as beautiful as it is it devastating. Nature is miraculous in her ability to resurrect life from the ashes. It’s already there…a week later bits of green appeared in stark, defiant contrast to the singed earth. A lone lizard wandered through the burn looking as shell shocked as I did. This, after all, is part of the natural cycle of things. The old is burned away making room for the new seeds that have patiently been waiting beneath the soil to make their entrance toward the now readily available sunlight.