China Is Building a Stadium-Sized Ski Lodge on Everest

We welcome it — but not for the reasons you’d think

They’re calling it the International Climbing Center, and when it’s completed, the Chinese-owned facility will be located 14,000 feet up Everest, in Tibet’s Gangkar Township.

This 900,000 square foot compound — which Gear Junkie noted was a third larger than Denver’s Pepsi Center — will house a tourism center, gear shops, repair shops and a medical center with a helicopter landing pad for emergencies. They’re also building accommodations and restaurants. So, it’s basically a ski lodge for mountaineers. There’s even a museum celebrating the sport, reports the China Daily.

Let that sink in for a second. The Chinese are building a stadium-sized development 14,000 feet — nearly three miles — above sea level. Given China’s dismal public safety record and the region’s propensity for earthquakes, it’s easy to foresee the construction being fraught with casualties, and the finished product failing to measure up to the oasis it’s being billed as.

But before you roll your eyes (as we did) at the notion of softening one of the earth’s most rugged, ominous and remote environs, consider this: China’s project could help Everest’s ecossytem by taking stress off the Nepalese south side, where most tourists currently start their acent thanks to favorable weather conditions.

To the south side, naturally. 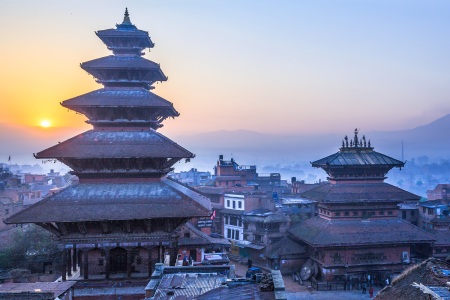