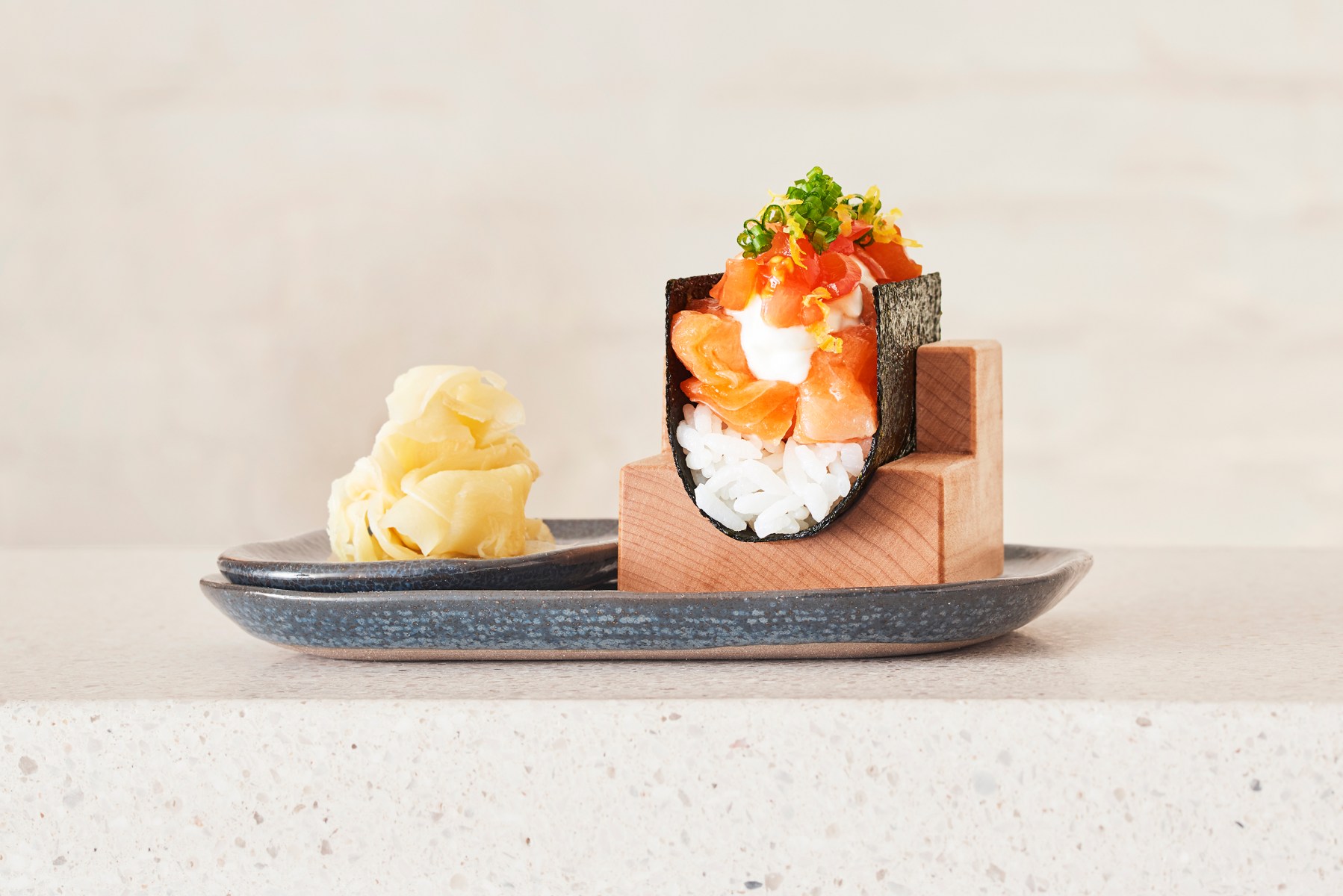 If you close your eyes, you'll think Nami Nori's salmon, tomato and onion cream roll is a bagel
Sebastian Lucrecio
By Jason Diamond / November 14, 2019 4:31 am

Sushi lovers in America always have an origin story. Some place or person or moment that helped them get over their fear of eating raw fish. Maybe it was a trip to Japan or the grocery store near the house you grew up in — somewhere along the way, there was the gateway sushi. For me it was the hand roll: a seaweed cone obscuring salmon and rice is what I can thank for getting me into something I now eat on a weekly basis.

Since that fateful day in some small, long-gone South Florida Japanese restaurant, I’ve had sushi all over the world. I’ve paid a lot of money for it at high-end places with fancy awards on the wall, and yet I find that the inexpensive place near my house that delivers very basic spicy tuna or crab rolls is one of the few can’t-miss eating experiences in New York City.

Sure, Noda and Shuko get all the accolades and acclaim that allow them to act as temples to the cuisine and charge accordingly, but I prefer the surprises, the out-of-the-way places, the spots that are brimming with energy. That’s why I always seek out sushi in L.A. — I’d rather have my mind blown in a place next to a FedEx store for $100 than plop down multiples of that to experience one of the so-called shrines. On the West Coast, my chances of getting what I want multiply.

Yet all hope is not lost when it comes to going out in NYC and having a fun night eating sushi. There are bright spots, and none shine quite like Nami Nori, one of the most pleasant new dining experiences I’ve had in Manhattan in quite some time.

Started by Masa vets Taka Sakaeda, Jihan Lee and Lisa Limb, there’s always a bit of apprehension on my part when I see the biography of the chefs or owners used as a selling point for a new place. Yes, they may have worked for some famous chef, but that doesn’t always translate well when they open their own place. For that reason, I was a little on guard walking into Nami Nori, a place tucked away down one of my favorite West Village streets (Carmine Street).

Yet when I walked in, that all melted away. Maybe it was the chatter of the crowd (there are few things as thrilling to me as a filled-up, lively New York City restaurant on an off night) or the white walls; whatever it was, something made me feel like I was in one of those breezy spot in Los Angeles. I felt good, relaxed — like somebody had handed me a cocktail to chill out with before I even took a seat at the sushi bar.

My first course, the crispy nori chips, arrived right away. I didn’t want to order too much because I’ve learned in the past that I don’t like pre-sushi snacks muddling up my taste buds. (I admit the nori chips probably weren’t the best choice for that, because holy shit, I would crush a bag of those things.)

I also went into the whole thing thinking I was going to be getting, well, some fish, some rice and then I’d need to walk to Corner Bistro for a burger to wash it down. I was starving; I’d been to the gym earlier that day where my trainer beat the hell out of me and I really needed to eat. So I put in an order for the chef’s choice of five temaki and worried that I didn’t get enough.

When the first hand roll of salmon, tomato and onion cream was put in front of me, I knew I was fine. I had to eat the sucker with two hands. And when I did, it tasted like sushi impersonating the freshest bagel I’ve ever had, just sans the bagel. It was like nothing I’d ever had before, because I don’t usually sit down at a sushi place and think, “My, the tomato and onion cream in a seaweed wrap with rice sounds exactly like what I want.” I’ve made the act of going out and eating sushi into such a thing that I don’t normally have much fun doing it.

From there, I waited for my next rolls with a big, stupid smile on my face.

The vegetarian ginger scallion squash and micro cilantro came out next. Again, I wasn’t expecting to be blown away because I don’t think I’ve ever ordered veggie sushi in my life. (Avocado and celery? Who goes out and orders that besides your vegan friend?) After that, the very basic yellowtail and scallion roll was somehow elevated: the freshness, the crunch. I could feel my whole outlook totally changing.

Here’s a thing you don’t hear all the time: I walked out of Nami Nori full, but also maybe a little better? Like I’d been holding going and sitting down at a sushi place as this almost holy experience. I think repeated viewings of Jiro Dreams of Sushi and reading about the Art of sushi-making made me look at this type of meal in a very specific way. And it should be regarded in its own light: great sushi is incredibly difficult to make. Understanding all the little intricacies is something you can’t learn by going and signing up for a class somewhere.

The people behind Nami Nori understand and appreciate that rule — they’ve spent years learning how to make great sushi. But they’re doing it on their terms. And those terms are something a little different, a little more fun and, possibly the best part, terms that won’t destroy your bank account. They’re taking the hand roll to a new level, and we’re all a little better for it. At least I am.